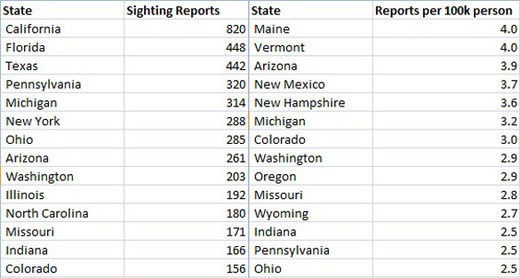 UFO sightings increased in 2013 and the areas where UFOs were seen the most may surprise you. Taking a look at the sighting report numbers from the Mutual UFO Network (MUFON), we are able to compile some interesting insights.

MUFON is the largest civilian UFO investigation organization in the US, and probably the world. They have investigators in every state, and representatives throughout the world. Clifford Clift, MUFON’s director in early 2012, told Lee Speigel of the Huffington Post in January of that year that MUFON received over 6000 UFO reports in 2011. He added that they had already received hundreds in the first few days of 2012 and were expecting a big year.

In 2013 MUFON received 7646 reports worldwide. 6457 of those were in the United States. So where are these sightings taking place? They are all around the world. MUFON has received reports from the UK to Romania. Here are the top 20 countries:

When it comes to the United States, UFOs are also seen all over the place. The states with the largest populations usually have the most sighting reports. However, when we run the numbers up against population we get a different picture.

In 2012 I was able to gather data from MUFON’s 2011 reports, and ran a similar story on UFO hotspots back then. Oregon, Colorado, and Arizona were on the top of the lists then as well. The 2013 data indicates an increase in reports from states like Washington and Michigan.

Although there are not many other types of data I could gather, I was able to get the number of sightings in regards to different shapes of objects. You may notice the numbers add up to more than the total number of sightings. That is because witnesses are able to choose more than one shape on their report. We can see that sphere and circle shapes are the most popular, with star-like, triangular and fireballs also high on the list.

When looking at the UFO reports per month, there was another interesting find. There was a spike in sighting reports in August. I separated the US and non-US sighting reports to see if this trend was international, and surprisingly it is. However, when I look at reports by state, the usual suspects show up, and the states with higher reports in August are spread across the country. When I look at non-US reports, 62 came from Canada and 29 from the UK. I also pulled up the types of shapes that were reported in August to see if there was an increase in a particular type of object, but I did not see any particular type showing up more than usual. This is only a cursory look at the UFO reports of 2013. MUFON’s database is a treasure trove of data for researchers. Right now, pulling reports is difficult, and there is limited access to the data. However, MUFON has plans to make the data more accessible and make it easier to pull custom reports.

Often researchers note that many sightings are mundane objects mistaken for something more mysterious. The number of 10 percent is often cited as the number of sightings that are truly extraordinary. Applying that theory to the number of reports MUFON has received in 2013 still leaves 765 reports of objects that are possibly of truly unknown origins.

I had requests for info on other states, so I decided to add data for all of them. The far left lists the states by the number of sightings, the second lists them by the most sightings per person with population data.

Alejandro Rojas is a radio host for Open Minds Radio, editor and contributing writer for Open Minds magazine as well as OpenMinds.tv. For several years Alejandro was the official spokesperson for the Mutual UFO Network as the Director of Public Education. As a UFO/Paranormal researcher and journalist, Alejandro has spent many hours in the field investigating phenomena up close and personal. Alejandro has been interviewed by media organizations around the world, including the largest cable and network news agencies with several appearances on Coast to Coast AM.

Advertisement. Scroll to continue reading.
In this article:2013, MUFON, sightings