An UFO “Hell Globe” was witnessed flying over Biel Benne, Switzerland on 7 October 2013. 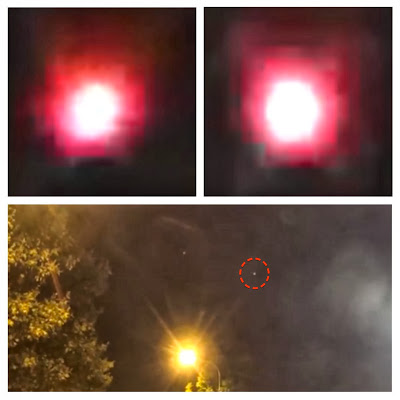 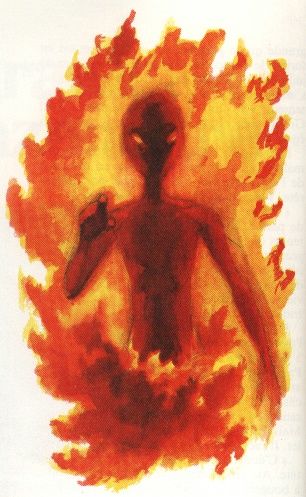 Here is a detailed report obtained from American Monsters, which provides us with a lot of information about these fireballs, and the alleged cattle mutilations associated with them.

American Monsters documents: “On an autumn evening in 1965, a group of British youths were cruising the town when one of them had a terrifying encounter with a fiery fiend that would leave him scarred for life.” This reported fiery fiend had emerged out of an orange glowing UFO. Glowing UFOs have been reported internationally.

The sighting occurred in Felixstowe which is a port town in northern England.

“The bustling hub offers a plethora of fascinating sights, but none so strange as the one seen by a trio of friends who were joy riding through the town on their way toward Essex at approximately 10:30 pm. on the evening of September 20, 1965.”

A group of joyriding youths consisting of the driver, 25 year-old Geoffrey Maskey, and his passengers, Mavis Fordyce and Michael Johnson had decided to pull over on the curb near a tree lined Walton Avenue.

“The youngsters were engaged in lively conversation when Johnson abruptly opened the car door and walked out into the murky night.”

Fordyce and Maskey were perplexed as their friend vanished into the blackness of the forest, but assumed that he must be answering “nature’s call.”

Just moments after, the youths began to overhear a “high-pitched humming” sound.

“Fordyce grew anxious as the disconcerting sound began overwhelming them and Maskey leaned out the window to try and ascertain the origin of the annoying noise.”

It was then that the youths spotted the glowing orange UFO, that is somewhat reminiscent of the description provided on orange UFOs today.

“The youths spied an oval-shaped, orange object suspended in the sky over 90-feet above his car; and it was glowing so brightly that it bathed the surrounding countryside in its eerie orange glow.”

The UFO then abruptly left the area.

“Without warning, the humming object shot away from the vehicle and vanished beyond the trees. The pair stared at each other in silent astonishment, when it suddenly dawned on them that Johnson was still in the woods… and that he might no longer be alone.”

“The apprehensive duo — both of whom were reticent to leave the car and wander into the forest wherein the UFO and their friend were lurking — began shouting their Johnson’s name to no avail.”

Johnson then suddenly emerged from the wooded area.

“He staggered into the road with a dazed expression adorning his face. Maskey hoped that he was just having a go at them, but as soon as Johnson collapsed in the middle of the street he knew that this was no laughing matter.”

Fordyce and Maskey wasted time in exiting the vehicle to their friend’s aid even though they were frightened and in shock.

“They found Johnson laying motionless on the asphalt, totally unconscious.”

Fordyce and Johnson with the friend they rescued sped away from the forbidding forest and the strange orange light toward the nearby Felixstowe hospital.

“Once at the hospital Johnson regained consciousness, but he was suffering from amnesia and could not recognize the friends who had rescued him, much to their dismay.”

American Monsters further documents that the doctors on duty diagnosed Johnson as having succumbed to a serious shock.

“Doctors noted that he had unusual burn marks on the back of his neck and a contusion above his right ear.”

The alarmed doctors decided to transfer Johnston to a better equipped hospital.

“The doctors then decided that it would be prudent to transfer Johnson to the hospital of Ipswich, which was far better equipped to deal with Johnson’s injuries and psychological condition.”

Johnson recovered his memory loss the next day.

“The following day Johnson recovered his senses and when his friends came to visit them he told them of his harrowing encounter with an ostensibly alien entity in the woods.”

Johnson then detailed his abduction by an apparent inter-dimensional regressive alien.

“Johnson claimed that when he abruptly got out of the car the night before he was compelled to do so by an unknown “force,” which insisted that he go into the woods.”

The abductee remembered under what circumstances he left his friend’s vehicle, and then described details about the alien associated with the orange glowing UFO.

“Johnson told his friends and doctors that he was forced to walk into the dark forest — although he was unable to recall exactly how far — where he encountered what he described as a humanoid being with the large sloping eyes that were glowing in the darkness.”

The abductee further described details about the alien humanoid.”

“[T]he odd creature was engulfed by orange flames. It was at that point that he blacked out.”

The alien abductee swore that he had no memories of what transpired next, until he woke up the following morning in a hospital bed. Doctors were sceptical and the newspaper reporters from the Ipswich Evening Star who published the strange account on 21 September 1965 were dumbfounded.

“Johnson’s friends — who had bore witness to the fiery, egg-shaped UFO with their own eyes — believed their buddy and knew all too well that something strange and terrifying had transpired in the woods near Walton Avenue that dark night.”

An illustration of the apparent demonic alien entity was included with the American Monsters report of the reported alien abduction encounter. [illustration attached]

American Monsters concluded that: “Whether or not this creature was a UFO pilot from ‘out of this world’ or a demonic entity hailing from the supernatural landscape that dwells beyond mythology, the burn scars on Johnson’s neck serve as a testament to this truly bizarre event.”

On 25 April 2010 the British Telegraph reported that farmers near Shrewsbury claimed to have witnessed sheep being “lasered” by unidentified light orange UFOs.

They have linked the unexplained incidents, where sheep’s brains and eyes were removed, to the mysterious orange lights in the sky.

The farmers detailed the mutilations associated with the orange UFOs.

In the article titled “Unexplained sheep attacks ’caused by aliens in UFOs’, farmers claim”, the British Telegraph noted that the farmers found sheep with “neat holes” while their brains and other internal organs were removed.

Other animals have lost eyes or had their flesh ‘carefully stripped away‘, usually on the left side as a result with contact from “mysterious orange lights in the sky“.

The British farmers found sheep with “neat holes” while their brains and other internal organs were removed. The British Telegraph elaborated that: “Other animals have lost eyes or had their flesh “carefully stripped away”, usually on the left side.”

Phil Hoyle, 53, traced the mutilations to orange globe UFOs in a 50-mile “corridor” between Shrewsbury and Powys. Mr. Hoyle elaborated that: “The technology involved in these attacks is frightening,” and that “these lights and spheres are clearly not ours”; and that the UFOs “are built by technology and intelligence that’s not from here.”

In this article:Hell Globe, Switzerland, UFO