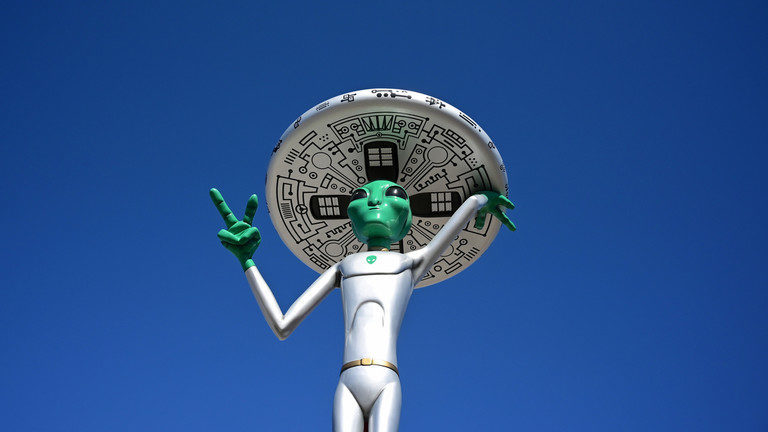 Thrilled by the enigma of a famous video shot in Turkey over a decade ago, some internet dwellers processed it through a powerful stabilization tool, revealing uncanny images that could dazzle even sophisticated ufologists.

The mystery started back in 2008 when a Turkish night guard named Yalcin Yalman began videotaping bright, crescent-shaped objects that regularly appeared and hovered over the Marmara Sea near the resort village of Kumburgaz.

His pastime earned him fame as a UFO spotter, and his videos quickly went viral due to their authenticity confirmed by numerous experts and witnesses who saw the same objects at the time of filming.

The gear Yalman used wasn’t top-notch at all as the original videos he made were quite shaky. The quality and definition of the unstabilized tapes dropped significantly when zoomed in or out, which led some skeptics to suggest the UFO was actually a US stealth drone or other aircraft.

There were several attempts to stabilize the Kumburgaz videos, with the last one surfacing online just this week. Uploaded by a YouTube channel called Unidentified Aerial Phenomena, the footage stabilized in Adobe Premiere video editing tool tries to solve the mystery of the greenish dots in the middle of the lit-up crescent.

The clip was also hailed by netizens for its outstanding quality and high definition, with many users, of course, noticing striking resemblance between the magnified dots and the perceived look of aliens.

All in all, the edited Kumburgaz images add to a growing throve of “unexplained aerial phenomena” caught on camera. Earlier, the US military confirmed authenticity of three widely-circulated videos appearing to show encounters between Navy aircraft and UFOs.

The news came into the spotlight given never-ending rumors about the US military keeping its eye on, or coming in contact with, UFOs visiting Earth.

Just back in October, the army made headlines by announcing a partnership with a group called To The Stars Academy of Arts and Science (TTSA). Owned by former Blink-182 guitarist Tom DeLonge, it claims to be in possession of a range of mysterious metal alloys that are allegedly beyond current engineering technology.

Now documents, relating to the Cooperative Research and Development Agreement (CRADA), released by the War Zone website, say the military wants to “assess, test, and characterize” the materials at government facilities to compare them with known commodities.

In this article:To The Stars Academy of Arts and Science, UFO Turkey