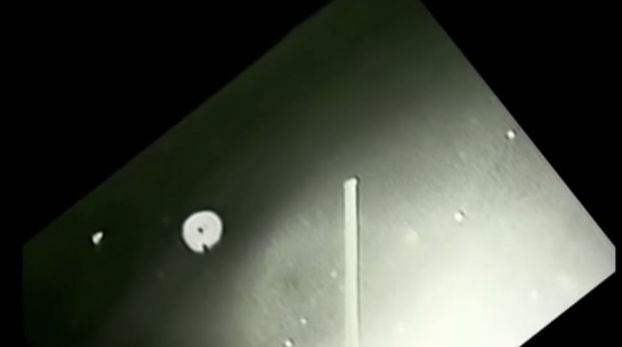 The incident happened Feb. 25, 1996, during Space Shuttle Columbia’s STS-75, the 75th Space Transportation System mission flown by one of the four space shuttles.

The mission was to be highlighted by the flight of a joint NASA/Italian Tethered Satellite System designed to investigate new sources of spacecraft power and ways to study Earth’s upper atmosphere, according to a NASA statement at the time.

On Feb. 25, Day 4 of a 15-day mission, the crew began to deploy the satellite and its 12 miles of “tether,” a cable that could conduct electricity.

“The world watched as the satellite smoothly and gently lifted from its cradle atop the latticework boom that previously had been extended some 40 feet (11.3 meters) out of Columbia’s cargo bay. The crew continues carefully unreeling the satellite on its slender tether,” NASA stated in a summary of Day 4 highlights.

But things went awry. At about 7:30 p.m., short of five hours into the satellite experiment, the tether broke and the satellite floated away.

A video clip of the drifting satellite and its attached 12-mile tether is still generating comment on YouTube.

Earlier this month, Stargazer Nation posted an enhancement of the original NASA footage that purportedly shows UFOs approaching the tether.  On the video, the tether looks like a stick surrounded by bright dots and some larger white circles with a hole in the middle.

At the time of the incident, astronaut Franklin Chang-Diaz explained the objects seen near the tether as “a little bit of debris that kind of flies with us.” The debris, he said, was illuminated by the sun.

Later, John Tindall of the History Channel noted that the camera’s telephoto lens was used with a circular mirror that had a hole in the middle, which left an artifact on the images.

Because the images on the camera were overexposed by bright sunlight, objects appeared brighter than they were, giving the illusion they were behind the tether rather than in front of it, Tindall said.

In the summaries of each day’s highlights, NASA online archives make no mention of UFOs or any strange sightings as the tether got away.

“Following the break, Mission Control asked the astronauts to record television of the boom and broken tether for post-flight analysis,” Day 4 highlights state.

If there were anomalies outside the shuttle window, they were left out of the highlights, which have the page-turning quality of a physics textbook.

“Once the tether is retracted and the boom is restowed, the crew members will turn their attention to the science activities involving the U. S. Microgravity Payload,” Day 5 highlights state. “The USMP experiments will study various aspects of materials science investigation.”

In the words of Stargazer Nation, “some things must be believed to be seen.”

In this article:Nasa, tether incident, UFOs