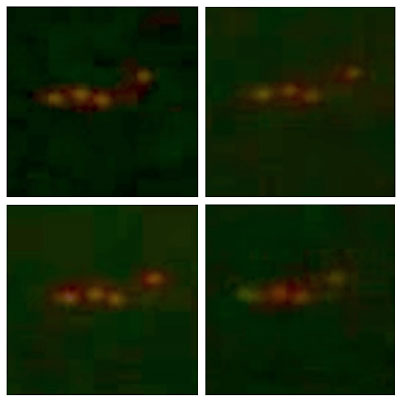 I was looking at the ISS live cam and captured this unusual large UFO near the ISS. I would estimate from its size that it’s about 500 meters away from the ISS and could easily be as large as the space station itself.

The simple fact that this glowing UFO was visible so long, over 1 minute, and then vanished behind the ISS shows us that the object is between the Earth and the space station and is not a reflection on the window of the ISS. This confirms without a doubt that something was out there.

Sorry for my computer cursor circling the object, but I was excited. At the end of the video I put a close up of the UFO. It seems to have four round glowing parts to it. The ISS was on the dark side of the Earth and the UFO was between the ISS and Earth itself.

The astronauts were actually talking just 2 min before and after, but it was about the air-conditioning on the ISS and how to fix some unit so I didn’t want to bore the viewers with that long wait.