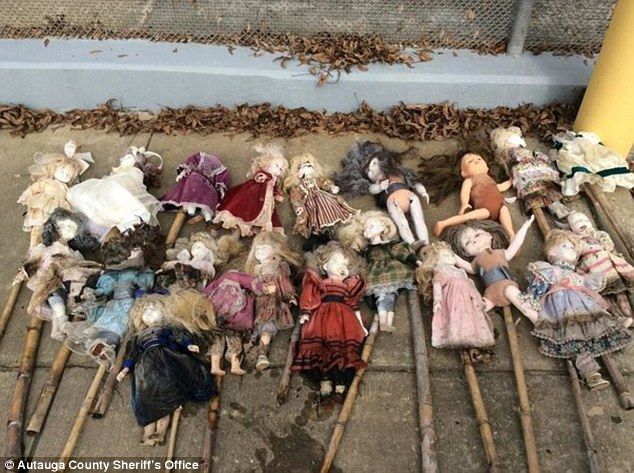 Autauga County sheriff’s deputies traveled by canoe into Bear Creek Swamp on Tuesday to recover the dolls, whose faces and hair were painted white.

Most of the dolls are porcelain and have the appearance of being antique, reports The Montgomery Advertiser.

‘I noticed the dolls several weeks ago while driving through the swamp working on a stolen vehicle report,’ he sad.

‘I noticed the dolls several weeks ago while driving through the swamp working on a stolen vehicle report,’said Autauga County Chief Deputy Joe Sedinger

‘I just thought they were a Halloween prank, and really didn’t give it much thought after that.’

But on Tuesday morning they decided to investigate after people expressed concerns on social media.

‘I admit it looked kind of creepy,’ Sedinger said. ‘You could see them from the road. We figured it was best to get them up.’

The Montgomery newspaper reports that it has been a rite of passage for generations of teenagers to enter the area at night looking for creatures said to roam the swamp.

He said the dolls are being inventoried back at the courthouse. In this article:Alabama swamp, porcelain dolls