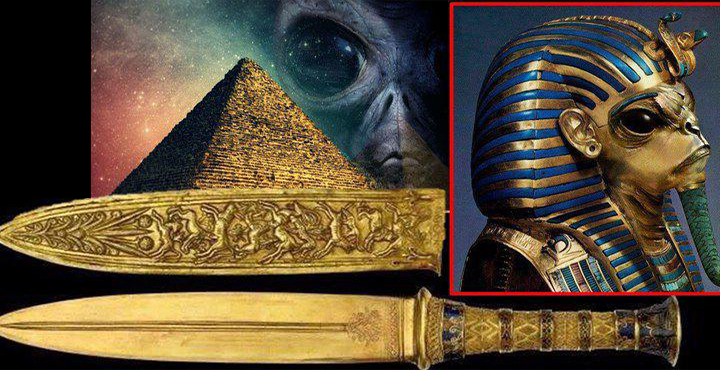 During the reign of king Tut between 1333 BC and 1324 BC, the understanding of iron metallurgy, or indeed the casting of such objects was very limited.

Iron smelting is the extraction of usable metal from oxidized iron ores.

It is vastly more difficult than smelting tin and copper, such metals could be cold-worked in simple pottery kilns, and then cast into moulds, a process largely accepted as being present within ancient Egyptian times.

However, the smelting of iron requires hot-working, and can only be melted in specially designed extremely heated furnaces.

It is therefore not surprising that humans only mastered iron smelting after several millennia of the bronze age. However, there is a pair of relics, found within ancient Egypt, who’s sheer existence disprove the officially held, chronological account of when these hardened metals were developed. Or do they? …

Within the ancient wrappings of the sarcophagus which contained pharaoh Tutankhamen, two daggers were discovered. Encased in gold sheaths, they were placed there more than 3000 years prior, for the king’s protection within the afterlife.

One had an iron blade and the other with a blade made of hardened gold.
Yet both are not made from regular metals, amazingly, these daggers are in fact, made from metals not native to Earth.

It is officially accepted that it would have been quite difficult, nigh impossible, for ancient civilizations to have acquired iron in pure states, so most of the pure iron found in weaponry within this mysterious culture, are academically accepted as coming from quote, “meteoric sources.”

This explanation, may be easier to digest for the majority of the population of earth, however, it is not only a flawed explanation, but illogical.

If this ancient Egyptian civilization which possessed knowledge we are yet to re discover, did indeed extract these alien metals from meteorites, yet largely accepted to have not been able to cast such metals, then an obvious question arises, how did they cast the metal into daggers?

The official explanation offered provides no answer, as is often the case with out of place artefacts.

A more logical scenario, is that these daggers were in fact the remnants of a far older civilisation, a civilisation responsible for the construction of ancient Egypt, a group of people visited by, or indeed travelled too, people from another world entirely.

Additionally, modern, advanced metallurgical analysis found that the iron dagger, is not a normal meteoritic iron, but a complex, intelligent, and very strong alloy, containing varying amounts of nickel, chromium, and cobalt.

Furthermore, the nickel content is so high, nearly 25%, it makes this alloy totally different from those made by man.

The Alchemy required to make such a non-rusting metal, was developed many centuries, of not millennia after king Tuts death.

Just where did these daggers come from? How old could they actually be? Were they made as a gift by a race who visited earth?

Apart from our postulations, it seems no one can produce a working theory.

In this article:king Tut, meteoric sources