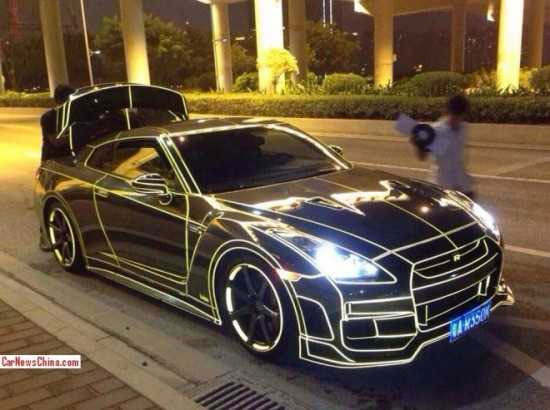 It looks like the Chinese aren’t happy with their plain old boring supercars. So they’ve decided to cover them up in the latest trendy accessory – TRON-like reflective trimmings. Several websites have reported sightings of such cars on China’s streets, despite numerous police warnings.

According to Zeng Chaoyi, a car decorator, the trend is very popular among young drivers because of its futuristic and modern appeal. The decoration is believed to be made of 3M reflective vinyl tape. The accents are applied all over the car, including the wheels.

One of the cars spotted sporting the wrap was a Lamborghini Gallardo LP560-4. There was also a Nissan GT-R, covered in gold and yellow illuminating lines. It was seen on one of the streets of Shenzhen city in Guangdong Province. It seems that the GT-R’s owner adjusted parts of the wrap to make it more impressive, covering even vents on the bonnet. Similar sightings have been reported from Chongqing city as well.

Unfortunately, the Chinese police force isn’t too happy about the car décor trend. They declared it illegal because it could confuse or distract other drivers and pedestrians. Traffic police officer Luo Kesheng said: “It’s strictly prohibited as it brings dangers on the road.”

He might be right, but I don’t know if they can do much about it unless they also patrol the streets in supercars, just like Dubai’s police force does.