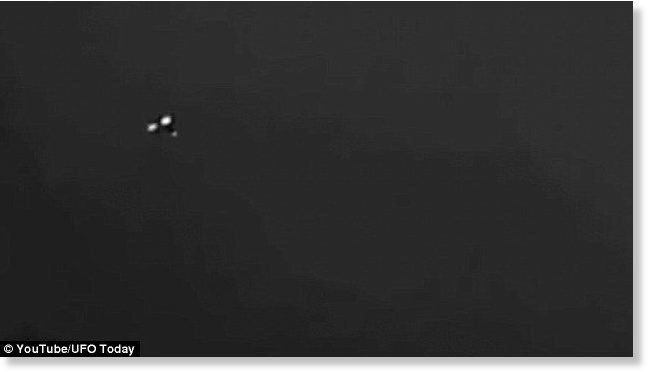 The bizarre object soars through the skies and UFO enthusiasts believe that it could be a TR-3B, the alleged surveillance aircraft of the United States Air Force

This clip of a triangular UFO flying through the air has been dubbed the ‘best evidence ever’ for proof of extraterrestrial life.

The bizarre object soars through the skies from an unknown location in the US and UFO enthusiasts believe that it could be a TR-3B, the alleged surveillance aircraft of the United States Air Force.

Theorists have been quick to point out that the footage shows a craft with three lights at each point that do not flash.

Planes have to have blinking lights by regulation which has led people to believe that it is something out of this world.

The object appears to be moving left to right at high speed as it is it filmed by a dashcam.

The YouTube description read: ‘On the 26 of January this amazing video was shot from a dashboard camera.

‘The footage captured a TR-3B UFO in mid-air and it might be the best evidence ever of the TR-3B UFO ever.

‘The triangular object is coming in from the left of the screen and you can see that this object doesn’t have any blinking lights like a normal airplane should have.

‘It is flying at a very low altitude which is very strange for a normal airplane.’

The TR-3B was suspected to be developed under a ‘black project’, which allegedly use money unaccounted for in official government budgets.

Conspiracy theorists conclude that the craft is able to fly into space and report back to the US government.

The allegations suggests that these ships are created at top-secret military bases such as Area 51 in Nevada, by reverse engineering alien technology.

Viewers have claimed that this video is evidence that the ‘TR-3B’ is being used by the government to monitor aliens.

One posted on YouTube: ‘I believe this to be reversed engineering from NASA or the Military Industrial Complex.

‘Most objects we see in our skies nowadays are human made, but there is a small percentage that are unexplained.’

However there is yet to be solid evidence proving that this was a TR-3B.

Founder of ufofinterest.org Scott Brando, told the Express he believes the video is a hoax due to anomalies with the ‘motion tracking’.

He added that landing lights of planes can also make a triangle shape when filmed at night.

In this article:proof of extraterrestrial life, UFO