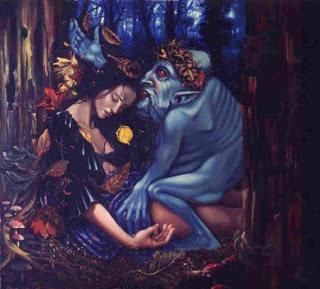 Chiloé, an island off the south of Chile, is said to be home to the Trauco, a sexually potent Dwarf with the power to paralyze women with a look, before having sex with them. The Trauco is described as being ugly and goblin-like, often wearing a hat and suit. His feet are stumps and he communicates through a series of grunts. Some reports suggest the Trauco doesn’t even need to have intercourse with his victims, that he can, in fact, impregnate them with his gaze.
Often, when a single woman on Chiloé falls pregnant people assume the Trauco is the father. In these cases the women are considered blameless as the Trauco is said to be irresistible to women.
El Trauco’s wife, La Fiura, is said to be a grotesquely ugly dwarf with the ability to cast a “sickness spell” against anyone who rejects her sexual advances. Her breath is so foul it can physically scar a human and turn animals lame. Despite her appearance, she is generally irresistible to men and, after having intercourse with them, she drives them insane.
The Trauco is a mythical entity who inhabits the woods of Chiloé, an island in the south of Chile. It has a powerful magnetism that attracts young and middle-aged women. According to myth, the Trauco’s wife is the wicked and ugly Fiura. The trauco carries a small stone-headed hatchet that he uses to strike trees in the forest to symbolize his sexual potency.
Whoever the Trauco chooses will go to him, even if she is sleeping, and fall enraptured at his feet. No woman can resist his magical attraction; all have sexual intercourse with him. Men of Chiloé fear the Trauco, as his gaze can be deadly.
When a single woman is pregnant and no one steps forward as the father, people assume that the Trauco is the father. Because the Trauco is irresistible, the woman is considered blameless. The Trauco is sometimes invoked to explain sudden or unwanted pregnancies, especially in unmarried women.
The people of Chiloé have in their legends that this creature is characterized by an extraordinary force and power to hurt away, being able to deform the face or break the bones of a man looking at it.
Its origin is uncertain, but is said to be a bastard son of the mythical snake Caicai , born of the union of the anger he felt this snake to humans, and ingratitude that many men have towards the sea, for everything it offers. The Trauco lives with his wife called the Fiura who is also his daughter, who was born of a relationship that had the Trauco with the sentence . With Fiura have several children, who have the same characteristics of trauco if they are male, and if you are female Fiura, which retain the same names as their parents.

This creature would live with his wife, the Fiura , in the hollow trunks of trees or in small caves, and naranjitas only eats the fruits of the plant quilineja.

The Trauco not monogamous , and therefore he is unfaithful to Fiura , characterized by often to seek out lonely girls, which attracts with its power, especially if they are virgins . Thus it is said that is an entity Trauco errant wandering through the woods looking for young virgins waiting to hanging on the branch of ticket , to avoid being caught. If the young woman walks alone and is in sight of Trauco, this by using his magical ax felling trees, so that the product of fright girl become disoriented, and so catch her off guard and paralyzing achieve through his eyes. Then using your Pahueldún, you gently blow your breath, whereupon the girl despite his appearance, would fall madly in this being. Already bewitched girl follows him to deep into the forest or to have sex with him. Product of the caresses of Trauco, it is said that women often end up with wounds on his body, especially on the face.

The Trauco also when you are interested in a woman, but can not take it, as a precaution because it never goes out alone into the forest, the first act Trauco communicating their presence to the girl, to deposit their droppings yellow front door of his house. Then the girl will announce his visit to the house of her dreams by sending lewd , in which he transformed into a handsome young man so magically convince. If the girl’s family is aware of these facts, should take precautions, as the Trauco could sneak into the house transformed into a bunch of quilineja with the rest of the branches, coal or wood used in the house, in this so expect the night to take his victim.
The Trauco not act in front of witnesses, and so is always alert. But if someone bothers to Trauco, and not a woman, is able to kill him by using his eyes, or breaking his bones. Also by its magical breath says he can twist his mouth, let hunchback, stunned, speechless, and sentence him to die in a short time.
In some areas of Chiloé, it is customary for mothers when they suspect the presence of this foulness, leave on the table to sleep a handful of dry sand. As the evil character is attracted to count the grains of sand , you miss the girls, and with the first light disappears for fear of being surprised by many people. Another way to pull the Trauco would put excrement in the body of the woman, as the Trauco is very clean in relation to everything it touches, so when you see dirty things away and greed no longer his girlfriend. It can also be removed by burning their droppings, but be careful because their droppings if stepped on or touch soon would cause the death of people. Man if surprised by the Trauco, and if you’re lucky and a small possibility of acting; should give blows or stripes into the Trauco Pahueldún as this intensely affect this being. Thus, the man can have a chance to escape, and if the man gets catch being one of the sons of the original Trauco may be able to catch this Trauco and hang on a fireplace, where it becomes a stick distilled some magical oil and thus achieve kill him. This oil would be a choice of excellent results that should be rubbed on the victims of the curses of Trauco.

Product of behavior that Trauco present in the society of Chiloé when a girl became pregnant and did not know who was the father of the child, she covered the disgrace of his daughters Trauco attributing this ceremony, in this context, it is argued chilota the male population seizes this myth, using it not only as an explanation for those “miracle births” but as a warning to young people to fear retain their virginity , a situation certainly not required to males. Fiura
Fiura likes to bathe in local streams. After bathing she lays naked for hours. She brushes her long hair with a crystal comb.It looks like a very beautiful woman, with large breasts and great height (1.50 to 2.00 meters) and long black hair. His face has a horrible factions, with sparkling eyes, which are almost hidden behind his huge nose. Its members are thin and clawed, and has the ability to lengthen and rotate in all directions the deformed fingers twitching of his huge hands. Use red robes and strange postures usually hideous grimaces his face. 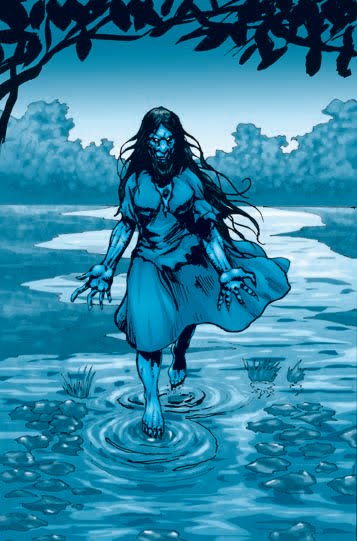 She also spent lot of time wandering in the bushes in search of the “Chuaras” fruit. She is not very brave. Whenever she hears something she changes her body in quite bizarre positions.
It is very dangerous for ordinary people to look at her. It is believed that looking at her will deform your hands or legs. In some cases it is possible to cure them. First a plant called “Pahueldún” has to be found. Person has to drink a juice extracted from it. To get the juice a person must be whipped! Immediately after the treatment, branch of the plant used has to be thrown in the sea.
One of Fiura’s passion is to cast spell on young woodcutters. They get confused, disorientated. She then forces them to have sex with her.The people of Chiloé have in their legends that Fiura is the only daughter and the seed of perversion of the acts of the sentence , his father would be the Trauco , who also is married, in order to continue spreading the evil that comes from the actions of its mother. It can thus have children with her father which have the same characteristics of Trauco if they are male, and if you are female it. Therefore retain the same names of these two beings.
Because of its origin, leads to malignancy and ferocity to his father-husband so lavish delights in evil people of Chiloé. It is said that wanders into the woods and sneaking in the bushes, looking for the fruit of the prickly chauras , eating greedily, and people can know that Fiura has gone through a place, noting the depositions that leaves on protruding roots of large trees. Also it is said that taking great care, you can see when she carefully combing comb glass or highly polished silver that shines with the sun’s rays, while bathing in small lakes. After the bath, sits on the moss, and remains naked for hours or going to dance on the tremors. It is characterized by superhuman strength and the ability to make use of the stench of his breath for members twisting or breaking the animals or the people who watch it, being that its power, which may take effect at a distance. Also characterized by being attracted to animals and manly men, because of his great strength and skill, it is impossible to get rid of it. To attract uses his great power of seduction evil vices inherited from his mother, so one man or animal will be drawn to the Fiura, and ask you to have sex, and popular expressions that say “tempted the sentence “. The only condition he would ask the love spell you would not see the face, if it comes to watch her, she uses her breath to punish evil. Once satisfied his sexual appetite, causes the unfortunate insane. Some accounts suggest it is also dedicated to abduct children to raise them as their own and so corrupt.
The evils and distortions caused by Fiura are practically incurable and only a few cases can get relief through a special ritual treatment and can ised only the machismo . To counteract the evils caused by Fiura is said to be taking scrapings from the “Stone of Ara” (marble stone altar of a church).
Against the deformations, the cure would be to cut a branch of Pahueldún (vine) at the beginning of dawn, and once carried with the patient, the branch should be whipped until the sap outbreak, which the patient should drink. Then hit the branch must be dragged to the beach, and then thrown into the sea. According fiuras chilotes are several daughters and only one witch chilote or calculated powerful can act against them, since normal men can not be closer.