Scientists often say that modern civilization is threatened with death as a result of a global war using weapons of mass destruction. What is curious, ancient epics and archaeological finds sometimes testify in favor of the fact that something similar has already happened on our planet.

The land of ancient Egypt is full of mysteries. And they are associated not only with the pyramids and burials in the Valley of the Kings. One of these mysteries is associated with huge fields of fossil green glass, spread over hundreds of square kilometers in the Libyan desert, near the Saad Plateau in the border area of ​​Libya, Egypt and Sudan, where the dunes of the Great Sandy Sea stretch.

Some pieces of this glass of natural origin weigh up to 26 kilograms, but most are much smaller and resemble fragments of a giant green bottle.

For the first time this natural glass in the form of small glass pebbles was found in the Libyan Desert as far back as 1816, but became widely known after Patrick Clayton, an employee of the Egyptian Geological Herald, saw the glass fields themselves.

200 kilometers away from these deposits. numerous pieces of the same glass were found, along with spearheads made of it, axes and other tools that were in use among the ancient inhabitants of the area. Some of the products are about 100 thousand years old.

Ancient Egyptians knew about these deposits. Not only they knew, but also used for their own purposes, for example, for the production of jewelry. So, the scarab beetle, one of the elements of the famous necklace of the pharaoh Tutankhamun, discovered by Howard Carter during excavations in the Valley of the Kings, is skillfully carved from volcanic glass. Where did it come from in the desert?

It is well known that the transformation of sand into glass occurs as a result of heat treatment. The temperature is required high, the sand melts at 1700 ° C, so that matches and brushwood can not do here. What heat source will be required to turn hundreds of tons of sand into glass?

There are several theories about this. According to one, for example, the whole cause of fulgurites is sand, sintered from a lightning strike, whose electric charge is enough to melt it. 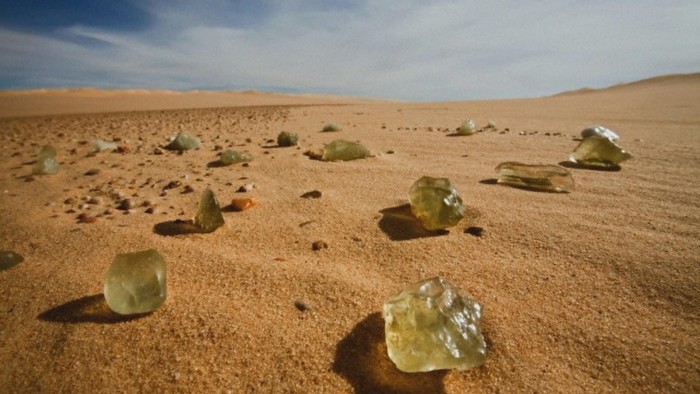 However, it is completely incomprehensible how the dunes of the Libyan Desert pulled so many lightning bolts. According to another theory, the originator of the formation of deposits of glass is a meteorite that exploded over the desert in time immemorial.

Many scientists agree that the reason for the appearance of glass in the desert was the invasion of a hundred-meter asteroid into the atmosphere, rushing at a speed of 20 kilometers per hour. This would perhaps be an impeccable explanation, if not for one “but”: on the surface of the Great Sand Sea there is neither an impact crater, nor its traces.

Meanwhile, back in the 1940s, after testing a nuclear bomb in the state of New Mexico in the United States, desert sands also turned into molten green glass. Is it possible to conclude on this basis that the glazed sands of the Libyan desert appeared under similar circumstances, only over 100 thousand years ago, as a result of a nuclear bombardment, after which the Sahara desert occupied most of North Africa? 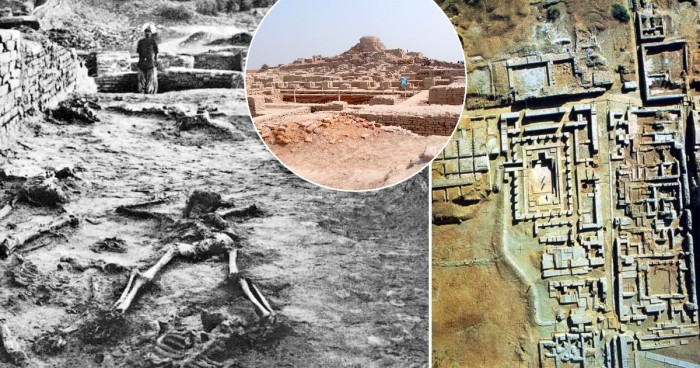 In 1922, the Indian archaeologist R. Banardji discovered the ruins of an ancient city in the Indus Valley. Excavations showed that it was flawlessly planned and equipped with plumbing and sewage systems that are superior to those used in India and Pakistan today.

The ancient city received the name Mohenjo-Daro. Among its ruins were found scattered fused pieces of clay, which at one time under the influence of high temperature turned into black glass. An analysis of the samples, carried out at the University of Rome and then at the laboratory of the National Council for Research of Italy, showed that the fusion occurred at 1500 ° C.

Such an ancient temperature could have been obtained in the furnace of a metallurgical workshop, but not in a vast open area. Moreover, archaeologists drew attention to one gloomy feature of the ancient city.

After carefully examining the ruins, they came to the conclusion that the degree of destruction of buildings and structures decreases as they move away from the city center or, rather, the epicenter of the explosion, which completely swept away individual quarters.

The skeletons found among the ruins suggested that death found people suddenly. Finally, the bones, as it turned out over the years, were radioactive. 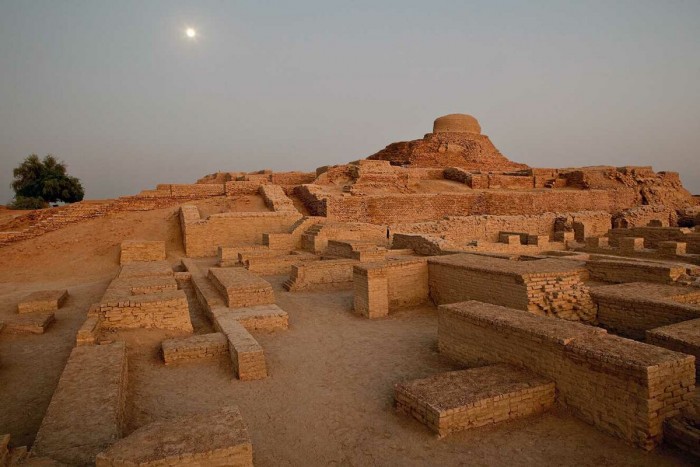 The mysterious and ominous picture found an explanation only after the Americans during the Second World War launched nuclear attacks on the Japanese cities of Hiroshima and Nagasaki. The same eerie pictures of destruction were observed there. So did Mohenjo Daro die in a nuclear strike?

Witness of the Mahabharata

The Sanskrit texts of the ancient Indian epic Mahabharata, consisting of 18 books and numbering over 200,000 verses, which is seven times more than Homer’s Iliad and Odyssey, contain information about religion, worldview, customs, history of ancient India, as well as legends about her gods and heroes.

A significant part of the epic is devoted to the description of hostilities involving gods, demigods, and people. Researchers believe that these events relate to the semi-legendary history of the invasion of Hindustan from the north by the Aryan tribes, pushing the indigenous inhabitants – Dravids – into the southern part of the peninsula.

However, among the episodes of ancient battles that were common for those times, there are also detailed scenes in which it is easy to recognize the use of … artillery, rockets, combat aircraft, locators, smoke screens, poisonous gases and even nuclear weapons. 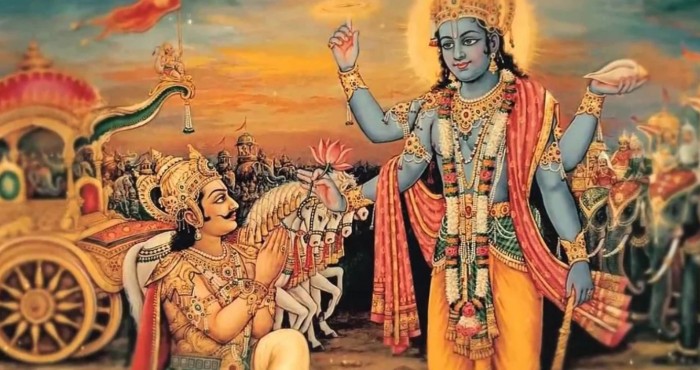 For example, in Dronaparva, one of the books of Mahabharata, the battle is described, during which explosions of shells, like huge fireballs, cause storms and storms, incapacitate entire armies.

As a result of these explosions, many enemy warriors, together with weapons, fighting elephants and horses, fly up in the air and are carried away by a powerful whirlwind, like dry leaves from trees.

This text also describes the process of the emergence of a mushroom cloud characteristic of a nuclear explosion. It is compared to the opening of a giant umbrella. After these explosions, the food became poisoned, and the surviving people fell ill.

Symptoms of the disease exactly corresponded to the main signs of radiation sickness – people had bouts of vomiting, hair and nails fell out, and then death occurred. 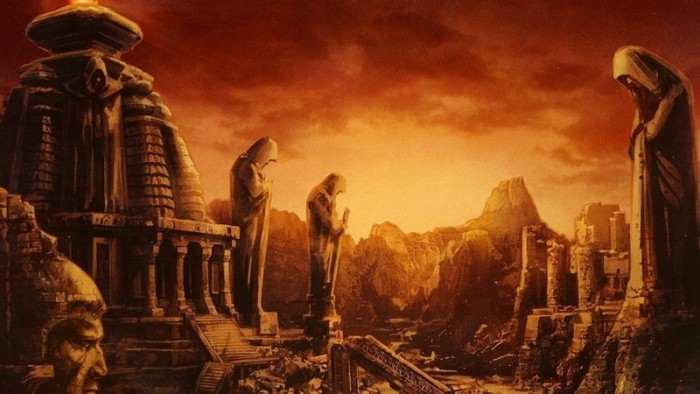 In Indian epics, ancient planes are also described in detail – flying vimaana cars. In the book of Samarangan Sutradharan, various types of vimanas are compared among themselves, the advantages and disadvantages of each variety are mentioned, flight characteristics, landing methods are given.

Particular attention is paid to the characteristics of structural materials such as wood, light metals and their alloys. Also referred to are materials used to create a driving force. Strange as it may seem, mercury is among the latter. 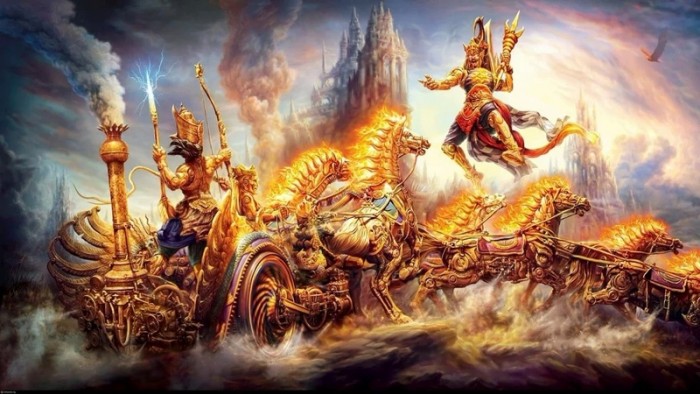 A.V. Koltypin in his work “The Earth’s Disappeared Dwellers” draws attention to the fact that in the Mahabharata, Bha-gavata-purana, Vishnu-purana and other ancient Indian texts space travel on airplanes is repeatedly described by gods, demons, heroes and various mythical creatures.

“Chitraketu, the lord of the Vidyadharas (demigod class, good air spirits. – Ed.), Went on a journey through the vast expanses of the universe … on his dazzlingly shining aerial ship …”, “Rushing through space, Maharaja Dhurva saw all the planets one after another. I saw the solar system on the way of the demigods in the chariots of the heavens … “,” So Maharaja Dhurva passed the seven planetary systems of the great sages known as sapta-rishi … “,” A descendant of the Kuru dynasty, King Vasu could travel outside the Earth in the upper regions of our Universe , and therefore, in those distant times, he became famous under the name of Upari-chara, “Wandering through the higher worlds.”

One of the episodes of Mahabharata tells how the great warrior Arjuna, after the battle with the underwater inhabitants of the nivatakavachs, returned to heaven on his flying amphibian chariot and discovered a city flying in space:

“On the way back, I saw another huge and amazing city that could move where whatever. He shone like fire or the sun. ” In this flying city called Hiranyapur, there were Danavan demons (daityas). Arjuna was ordered to smash them. Noticing the approach of his aircraft, the dans began to fly out of the city in their celestial chariots – well, exactly the “Star Wars” by George Lucas! Then Arjuna “a powerful avalanche of weapons … blocked this formidable stream. He awed them, plowing the battlefield with a chariot, and … the Danavas smashed each other.” 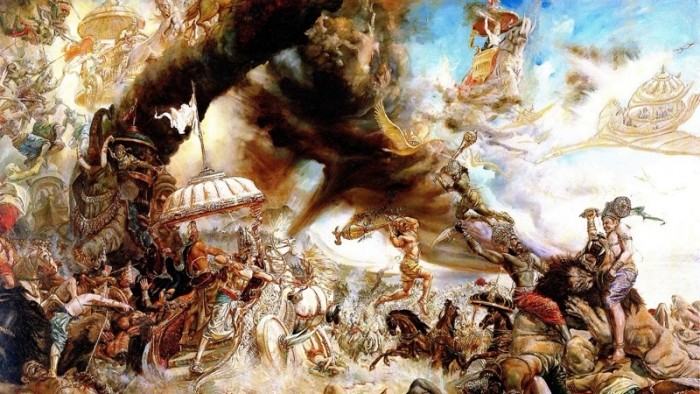 Subjected to a powerful attack from Arjuna, the Danavians lifted their flying city into the air. Then Arjuna “with a powerful shower of arrows … blocked the daitians and tried to stop their movement.

The gift of the daityas was directed wherever they wanted, this heavenly, floating in the air, marvelously sparkling city, moving at will: it either went underground, then rose again, then quickly moved to the side, then plunged into the water. ” Ultimately, Arjuna hit the heavenly city with iron arrows, so similar to modern kinetic ammunition. And when the 60 thousand surviving demons rushed to Arjuna in their flying chariots, he incinerated them with a weapon called Raudra, obviously a kind of nuclear weapon.

So, the findings of archaeologists and ancient epics really testify to the fact that a long time ago on our planet and even in outer space unbelievable wars raged with the use of the most advanced weapons. And it is very likely that such events happened repeatedly.