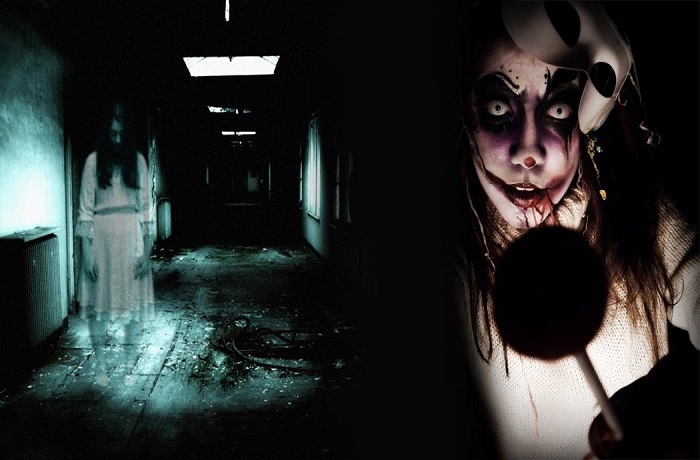 Japan is a distant and mysterious island. Before becoming a country full of buildings and businessmen, it was the land of samurai, martial arts and … urban legends.

An urban legend is a modern form of folklore, a story that is sometimes considered true, but not always, by its narrator. These legends are part of the collective memory. Obviously, despite its name, an urban legend does not necessarily take place in an urban area. The term is just used to differentiate modern history from ancient.

Japanese people are fond of urban legends and they have countless, here aew the most creepy Japanese urban legends. It’s up to you if you are still ready to visit Japan after reading this.

1) Kuchisake-onna, the woman with the split mouth

During the Heian era (794-1185) there lived a very beautiful woman, wife of a very jealous samurai. But she was also not very loyal. The samurai ends up discovering the multiple deceptions of his wife. Dishonored and betrayed, he decided to kill her by slitting her mouth with commissures up to both ears, while yelling at her “Who will find you beautiful now?”.

Today, it is said that the woman with the split mouth appears at night with a surgical mask to hide her “smile” and a long pair of scissors. When she meets a man, she asks him the question “Am I beautiful?”. If he answers no, he is killed immediately. If he answers yes, she then removes her mask and asks “Even like that?”. Answering no again means death. If the man says yes, she follows him to his home before killing him outside the door. The only way to escape her is to tell her that she is an ordinary woman, neither beautiful nor ugly.

It’s a mysterious village somewhere in Japan. At the entrance to the village, there would be a sign saying “the constitutional laws of Japan do not apply here”. Residents of the village would live in quite a special way since incest, cannibalism and murder would be rampant there.

For unknown reasons, electronic devices would not work in the village. Everyone who has been there has never returned.

This doll belonged to a 3-year-old girl who died of illness in 1918. The family moved later and, not knowing what to do with the doll, they asked the Mannenji monastery to take care of it because it was a toy their little girl’s fetish. Later, one of the monks was told that the doll’s hair had grown longer. After verification, they had indeed grown!

The monk therefore decided to cut the doll’s hair, but it became even longer. The hair was then analyzed and is believed to be of human origin! The doll would therefore contain the little girl’s soul, and she would sometimes smile. Each year, a ceremony is held in honor of the girl, and the doll’s hair is cut.

The word Hitobashira means “human pillars”. In the 17th century, it was customary in Japan to bury living people in the foundations or pillars of buildings. These sacrifices were to please the gods, who then blessed the buildings and ensured them a longer life.

But suddenly, the buildings in question would still be haunted by the spirits of the poor buggers who were buried.

This tunnel, built in 1927, is said to be haunted by the spirits of workers who died during its construction, which took place in conditions close to slavery. The tunnel is 444 meters long, which makes it cursed since the number 4 is somewhat the equivalent of the number 13 in our country, its pronunciation being the same as the word “dead”.

The ghosts of the tunnel would enter your car to scare you, causing an accident. Each new victim would be trapped in the tunnel, adding to the number of spirits. A mirror would also be placed in the tunnel. If you see a ghost looking inside, you die in excruciating pain.

And to add a layer, the length of the tunnel would change depending on the time of day!

In this article:Japan, urban legends