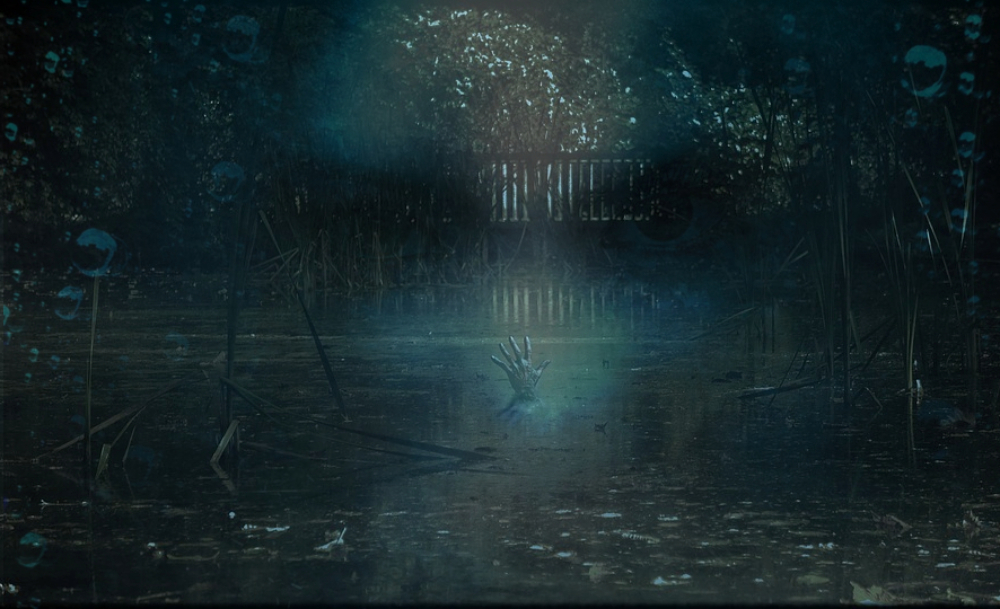 It sometimes seems the world is full of supernatural mysteries which may never be solved. Numerous tales of the strange and paranormal are often link to bodies of water, and especially lakes which by all accounts seem to be cursed, haunted or even both. Although scientists have been trying to unravel some of mysteries for years, no investigations have yielded any rational answers.

These bizarre eight lakes are actually cursed…or so the legends go.

1 – Llyn Idwal – The lake where no birds will fly, Wales, UK A the head of Cwn Idwal is a dramatic gash in the cliffs that is known as Y Twll Du (Black Hoel). Alternatively it is called ‘Cegin y Cythraul’, but is more popularly know as the ‘Devil’s Kitchen’.

The place has a forbidding appearance and it is easy to understand how it was once regarded by local people as a demons’ haunt. An ancient legend tells us that Cwn Idwal is named after Idwal, son of the Owen Gwynedd, Prince of North Wales. Young Idwal was untrsuted tio the care of Nefydd the Handsome of Nant Conwy, but Nefydd oredered his son Phun to murder the young prince.  His body is said to have been thrown into the lake and since that day no bird will fly over Llyn Idwal. Lake Lanier has a deadly reputation, and an examination at the statistics suggests it’s warranted. Since 1994, northeast Georgia’s favorite manmade lake — which touches parts of Gwinnett, Hall, Forsyth, Dawson and Lumpkin counties — has seen at least 160 people die under mysterious circumstances.

It is perhaps this tumultuous history that has led to the supposed curse of Lake Lanier, which has been fueled by an usually high rate of deaths by drowning, freak accidents, and unsolved crimes. Over the years, there have been an inordinate amount of deaths associated with the lake, ranging from boating accidents, drownings, and even a fair number of drivers who have lost control of their vehicles to go careening off of roads to crash into the water. Many of the drowning cases are somewhat odd in that they have happened very close to shore with strong swimmers and in calm conditions, which considering the history of the lake have given rise to rumors that Lake Lanier is somehow haunted or cursed. As with Round Valley Reservoir, there have been those who have described unseen hands pulling at them from below or even scarier the sensation of something covering their mouth to prevent them from breathing. There are various stories of boats hitting something in the water only for it to turn out there was nothing there, boats or other watercraft capsizing for no apparent reason, and sudden, dangerous rogue waves that seem to come from nowhere without warning to maraud across the surface before vanishing as suddenly as they formed. The lake is said to be protected by a python god who lives in the hills around the lake. After bathing in the lake he beats his drums – large stones near the shore, and resident say they can hear the sound. He is celebrated annually with the Domba, or Python Dance performed by young adolescent girls from the villages close by. The level and colour of the lake’s water are said to reflect his mood. Although three rivers flow into Lake Fundudzi, it never overflows.

Adding to the lake’s sacred status is the mystery of the water level, which rises and falls independently of rainfall. Locals can recount recent tales of a foreign developer who wanted to build a resort on the edge of Lake Fundudzi. After construction had begun, the lake’s waters rose to submerge the building site. Not to be that easily put off, the developer simply moved further up the shore and began again. Once more, the level of Lake Fundudzi rose to submerge the site. Frustrated, the developer left and the waters receded.

Interestingly, the curse of Lake Fundudzi only seems to affect outsiders, with no locals known to have been subjected to its wrath. Indeed, the locals claim that although crocodiles inhabit these waters they will casually ignore any from the area, while attacking foreigners. The Smerdyachee Lake is located in the Moscow district in Shatura region, approximately 140 km east of Moscow city. Scientist suggest the lake was formed as a result of big meteorite impact, however it is one of the existing theories.

Local fishermen had reported strange pungent smell of hydrogen sulfide emanates from the lake. That is why the lake has got its name “Smerdyachee” (“Stinking Lake” in Russian). There are a lot of myths associated with this strange place as well as numerous reports of supernatural disturbances and other paranormal activities.

Local residents claim there was a church right on the place where lake is located. One day it has vanished without any trace along with the priest, and a smelly lake appeared instead. Since than  the reflection of sunk church is coming up to the surface.

There some claims Smerdyachee lake has a double bottom, which, rising and sinking alternately. At a depth of roughly 20 metres into the lake, there is a so-called thermocline – the water below this level has a very low oxygen content and a higher than normal hydrogen sulphide content. Any objects that have ended up in the hydrogen sulphide water over thousands of years may have been preserved virtually unchanged. Scientists hope one day some rare artifacts would be unearthed from the bottom of mysterious lake. White Rock Lake is a reservoir located in north-east Dallas, Texas (United States). The lake was formed by damming White Rock Creek, which today widens into the lake before continuing south out of the spillway and emptying into the Trinity River. This year it was named as one of the world’s top 14 most haunted bodies of water.

They say Dallas’s White Rock Lake is haunted by a young woman wearing a soaking-wet evening dress. “Apparently, the girl tells people she was involved in a boating accident and needs to get to an address on Gaston Avenue. When she gets into a car’s back seat, she disappears,” the Dallas News reports. These encounters have been reported off and on since 1964, although no one knows who the woman is or whether a woman in an evening dress actually drowned there. Don’t miss these strange urban legends that turned out to be true. Otjikoto Lake of Namibia, which is a small lake with a diameter of only 102 meters (335 ft) and an average depth of 45 meters (148 ft), and is only one of two permanent natural lakes in the entire country. Although it is mostly shallow, there are areas that drop off into dizzying depths that have yet to be determined, with possibly vast underwater cavern systems. Indeed, according to legend the lake is bottomless, and the home to all manner of supernatural creatures, which reportedly have the habit of grabbing anyone who enters to pull them down to their doom.

Lake Otjikoto has a colorful history as well. During World War I, the Germans used the lake as a dumping ground for all manner of discarded war materials including cannons, firearms, ammunition, and countless others, which was all unceremoniously thrown into the lake before their surrender in 1915, in order to keep the enemy from using them. While this is all true, and much of this World War I ordinance and equipment can still be seen rather well-preserved in these depths, if rumors are correct, the Germans also dumped other things they didn’t want found as well, including a vast treasure of 6 million gold marks.

The stories of such a large treasure lying at the bottom of this relatively small lake has proven to be irresistible to numerous treasure hunters, which has also proven that perhaps the myths that the lake is a cursed place full of vengeful spirits as well. Many would-be treasure hunters are said to have met their fates in the lake, often very experienced and seasoned divers, further enforcing the idea that the lake claims those who would challenge it. So many people have died trying to get to the treasure that the lake has gained a reputation for being a cursed death trap, and it was the focus of an episode of the Travel Channel’s Expedition Unknown, with Josh Gates. Whether the tales of this lake’s cursed treasure are real are not is up or debate. Both Bala and Llangorse lakes are said to cover “drowned cities”, the bells of their churches audible to the human ear whenever conditions are right. That may be mere legend but the waters of Kenfig Pool do cover the long-lost town of Kenfig, a habitation covered first by the sand, then by the water of the area.

Nowadays, all that remains is the seemingly-peaceful lake, though strange events here are not unknown. 12th-century travel writer Gerald of Wales recorded that the lake had “miraculous properties such that local inhabitants have witnessed it completely covered with buildings, that in winter when covered with ice it emits a loud groaning noise and that the lake sometimes turns green.” Other local tales say that church bells can sometimes be heard ringing beneath the waves. From the early 1960s to the late 1980s, more than 200 ships sank in the mysterious waters of Poyang Lake, which is known as China’s Bermuda Triangle. The incidents have resulted in numerous ships and more than 1,600 people gone missing, with over 30 survivors driven insane.

Poyang Lake is the largest freshwater lake in China, and is located in Jiangxi Province in the southeast of China. The lake’s actual size fluctuates tremendously. According to the Encyclopædia Britannica, at its fullest in summer, “it is 1,385 square miles (3,585 square km), but precise measurement is impossible because the difference between flood level and low-water level is sometimes as much as 25 feet (8 meters).”

According to the department in charge of maritime affairs, large ships with payloads as heavy as 2,000 tons have sunk in Poyang Lake. On Aug. 3, 1985, 13 ships were lost on a single day, which is an extremely rare event in maritime history.

Scientists have been trying to unravel Poyang Lake’s mysteries for years, but no investigations have yielded any concrete conclusions.

In this article:cursed, supernatural mysteries