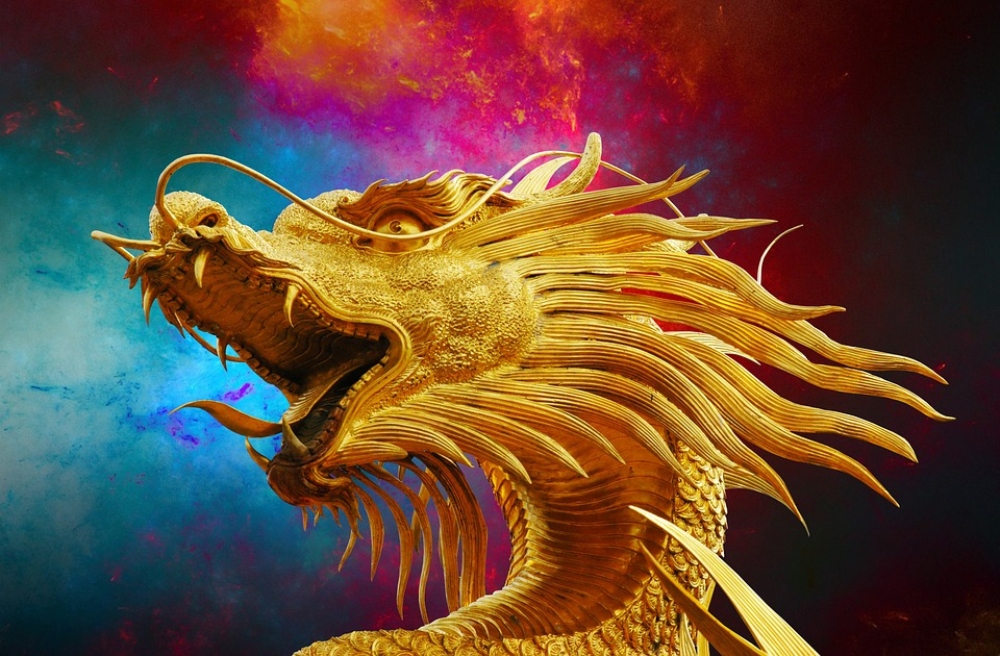 Dragons are the most widespread ancient and powerful of all monsters. Almost every country’s mythology includes its own dragon.

The dragon is the beast that has its teeth and claws firmly embedded in the psyche of mankind and shows no signs of relinquishing its grip. Usually, the dragon guards something and is considered undefeatable until a hero suddenly comes along and, with help of some clever tricks or powers, beats the monster in battle.

Amazingly dragon sightings are still reported to this day. Dragons fill legends, folklore, literature and art however they feature only on national flags of three countries. One is yellow dragon on the flag of Bhutan, the other is Y Draig Goch, red dragon that bestrides the flag of Wales, and inside the cross on Maltese Flag is a design of Saint George and the dragon.

There have been many theories proffered to explain the dragon phenomena, however nobody knows for certain when or why dragons entered into the popular culture, although tales of dragons existed in ancient mythology.

Let us take a gander at few mythical dragon entities from cultures across the planet that you might not have known about.

Also known as Quetzalcoatl, Kukulkan was worshiped as the great ‘feathered serpent’ god in the pantheon of Aztecs, Toltecs and the Mayans. The major deity (often taking the form of a mythical dragon-like entity) seems to have played a multifaceted role while practicing his ‘godly’ business. To that end, Kukulkan was the god of creation, the sire of both the Morning and Evening Star, the protector the craftsmen, the rain-maker, the wind-blower and also the fire-bringer. Interestingly, both the Mayans and the Aztecs were not too keen on solar eclipses (given the sacredness of the sun), as such their mythic traditions used to depict such rare scenarios with the Earth Serpent swallowing the great Quetzalcoatl. Furthermore, as opposed to their cultural penchant for human sacrifices, Kukulkan was supposedly not fond of such bloodthirsty practices.

The ritual of worshiping Quetzalcoatl is still practiced by the indigenous peoples of Mexico, Guatemala, Nicaragua and El Salvador as a way to connect with their ancient god.

Typhoeus or Typhon was considered the mightiest and deadliest monster in Greek mythology. He was the last son of Gaea and Tartarus, created as a last attempt to repel the Olympian gods from defeating the Titans during the Titanomachy.

Known as the “father of all monsters”, Typhon was a fire-breathing dragon who had one hundred heads that never slept. After the Titanomachy, Gaea wanted to punish Zeus for imprisoning her Titan children in Tartarus; thus, Typhon was born. Typhon confronted Zeus and in their first battle, managed to repel almost all of the Olympian gods and tear out Zeus’ tendons. Hermes managed to get the tendons back and give them to Zeus, who eventually threw his lightning bolts against Typhon and overwhelmed him. He finally trapped him underneath Mount Etna.

Typhon was married to Echidna, who was considered as the “mother of all monsters“. The two of them had a number of children later one.

The snake of the mountains, a three-headed Slavic dragon, is an extremely popular character with dozens of myths and legends surrounding him. There are cartoons about this evil creature  and even several monuments scattered throughout Russia.

Russian’s version of that dragon is called Zmey Gorynych, which means “Snake of Mountains.” He usually lives in the mountains or the forest, which are just one word in some Slavic languages. “Gorynych” is the dragon’s last name, which in Russia is given based on the name of one’s father. In folklore, Gorynya is an epic hero of the mountains.

According to legends a Slavic dragon knows how to speak. This weird serpent usually has three heads – although sometimes seven or even nine – and is so enormous that he blocks out the sun when flying. He is terrifying and can spew sparks, smoke and fire.

Here’s how one ancient Slavic poem depicts the dragon: “Zmey Gorynych, a terrible snake with three heads and seven tails. A flame blazes from his nostrils. Smoke belches from his ears. Copper claws sparkle on his paws.”

Zmey’s opponent is usually an epic hero, a bogatyr named Dobrynya Nikitich. According to the legend, when Dobrynya hits the dragon the first time, he begs for mercy, the poor little serpent. The kind hero then takes mercy and releases him. The dragon almost immediately goes and kidnaps a princess, forcing Dobrynya to fight him again. But this time it’s an epic battle to the death that lasts three days and three nights. Y Ddraig Goch, Welsh dragon, seems quite typical in its dragon-like appearance with four legs and wings, but in many cultures, what we call dragons were essentially large serpents, as iconography from ancient Mesopotamia, Greece, and Egypt suggests. One legend recalls Romano-British soldiers carrying the red dragon (Draco) to Rome on their banners in the fourth-century, but it could be even older than that.

It is considered that the Welsh kings of Aberffraw first adopted the dragon in the early fifth century in order to symbolise their power and authority after the Romans withdrew from Britain. Later, around the seventh century, it became known as the Red Dragon of Cadwaladr, king of Gwynedd from 655 to 682.

Geoffrey of Monmouth in his Historia Regum Britanniae, written between 1120 and 1129, links the dragon with the Arthurian legends, including Uther Pendragon the father of Arthur whose name translates as Dragon Head. Geoffrey’s account also tells of the prophecy of Myrddin (or Merlin) of a long fight between a red dragon and a white dragon, symbolising the historical struggle between the Welsh (red dragon) and the English (white dragon).

Druk or the ‘Thunder Dragon’ is the national personification of Bhutanese culture, mythology and monarchy.

To that end, the elaborately scaled drake is prominently featured in Bhutan’s national flag and national anthem (Druk tsendhen), while the Himalaya-nestled nation itself is called as Druk Yul (in Dzongkha), which translates to the ‘Land of Druk’. The mythical dragon-inspired scope also extends to personal titles with the leaders of Bhutan being addressed as Druk Gyalpo or ‘Thunder Dragon Kings’. And, if you thought that was stretching things a bit – well, even all the political parties were named as ‘Druk Party’, for a mock election that was held in 2008.

In Norse mythology, Nidhogg (literally “Curse-striker” or “He Who Strikes with Malice”) is the foremost of several serpents or dragons who dwell beneath the world-tree Yggdrasil and eat its roots. is the corpse-eating dragon that lives entwined around Yggdrasil’s foot. Nidhogg is stalking in the roots of Yggdrasil.

In the Völuspá, a very powerful female shaman and seer, Völva, reveals that Nithhogg (“the Dread Biter”) gnaws the roots of Yggdrasil; his evil deed symbolizes the destructive elements in the universe and this malevolent dragon is in fact the greatest threat to the tree of life.

Accompanied by his serpent sons (Goinn, Moinn, Grabakr, Grafvolludr, Ofnir, and Svafnir), Nidhogg gnaws the root of the sacred ash tree, threatening to destroy it.

It is Nidhogg’s plan to kill the tree, because he knows that its death would be signal the downfall of the gods.

In stories, a Chinese dragon can be composed of many different animal parts, but it’s more commonly depicted as having: the tail of a fish, the scales of a carp, the neck of a snake, the belly of a clam, the head of a camel, the claws of an eagle, the paws of a tiger, the ears of a cow, the eyes of a demon, the beard of a goat and the horns of a stag. In terms of the origin of Chinese dragons, there are many explanations and book records. One of the explanations is widely recognized: Chinese dragons are created through totem. The origin is clearly stated in the Records of the Grand Historian (Shi Ji): they are the integrated creature of several animals which are the totems of  tribes  involving in the tribe wars, where the Yellow Emperor (Huangdi) defeated other tribes and united the country. As such, Chinese dragon becomes a totem of the whole nation, and heads forward with the nation’s entering into a new chapter – unification, and the Yellow Emperor (Huangdi) is considered as the emblem of a dragon, while Chinese people are the descendants of this nation and of dragons. In the thereafter several thousand of years, dragon is the symbol of China, and an intangible wire uniting Chinese people. To Chinese, dragon brings them luck, wellbeing and all good things.

Advertisement. Scroll to continue reading.
In this article:dragon phenomena