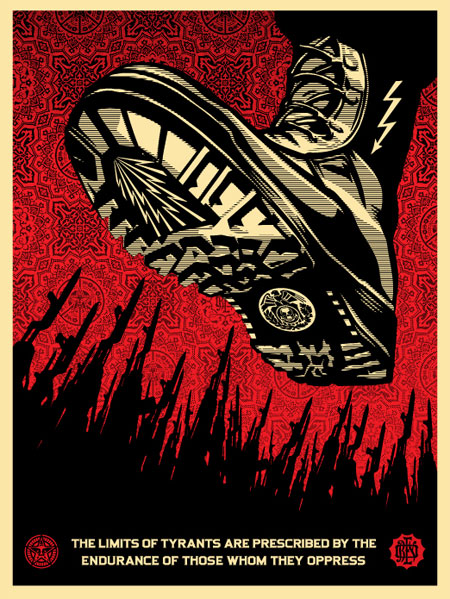 We have chosen to highlight United States agencies; however, this top 10 list has global impact, as the U.S. has now proven to be the enforcement division of the overarching globalist agenda of centralized control.

One could argue that every government agency serves the purpose of stifling freedom and wasting taxpayer money. Yet, the 10 listed below go the extra mile for their sheer corruption, draconian regulations, and ultimate impact upon the largest number of citizens.

The main criteria for inclusion in the top 10 is the amount of money spent by the taxpayer according to official budget declarations, and then attaining the highest level of doing exactly the opposite of what they were supposedly created for.

Here is the countdown to the top 10 most dangerous U.S. government agencies to the freedom, prosperity and health of its citizens . . . .

#10 – Environmental Protection Agency (EPA) – annual budget $8.5 billion: Their record of ignoring environmental damage and the health effects on humans from major events such as 9/11, the Exxon and Gulf oil spills to the worst case, Fukushima, is unparalleled. Rather than investigate and warn of real dangers, they have gone after farmers for dubious claims of water contamination, while treating milk spills as they should have treated oil spills.  Even worse, the EPA has concluded that there is no law preventing it from doing “research” on Americans. A recent lawsuit over the EPA’s work with airborne pollutants will put this claim to the test in Federal court. Their illegal human experiments could break the Nuremberg Code (source: The Washington Times).

#9 – Internal Revenue Service (IRS) – annual budget $13.3 billion:  Cries of “End the Fed!” continue to get louder, while more people are beginning to wake up completely and couple this with “End the IRS!” In fact, the two were developed together 100 years ago making the private Fed and the government IRS fraternal twins in creating a system of indentured servitude through dollar devaluation and arbitrary tax collection, respectively. The Fed enslaves through stealth, while the IRS uses force to impose itself through ever-expanding regulations and the threat of fines and imprisonment. As the collection division, the IRS rakes in a staggering $2.3 trillion annually. Despite that massive amount, the IRS has a distinguished record of ignoring the shenanigans of major corporations and federal employees, while focusing harshly on the average private citizen and small businesses in particular. Thankfully, there is some momentum toward abolishing the IRS through FairTax legislation. Now would be a good time, as the IRS will be empowered even further when the healthcare overhaul takes effect.

#8 – Federal Emergency Management Agency (FEMA) – annual budget $13.5 billion:  Despite massive funding to help people in dire need of assistance, FEMA  has failed spectacularly in the cases of Katrina and Sandy, even hindering the ability of people to make it on their own, as gun confiscation was ordered against the population affected by Katrina. The mechanics of offering aid to legitimate victims of Sandy are still being debated by the U.S. government.  Additionally, there is a disturbing amount of evidence that  suggests FEMA would be instrumental in enslaving large populations  following an economic collapse or civil unrest. FEMA centers are now open knowledge and if implemented will likely resemble the squalor and horror that refugees encountered when jammed into the New Orleans Superdome following Katrina.

#7 – Department of Justice (DoJ) – annual budget $28 billion: This includes the Federal Bureau of Investigations (FBI) which has its own annual budget of $8 billion. The “Department of Justice” is perhaps the most Orwellian oxymoron of all government agencies.  For decades they have pursued a failed War on Drugs that targets small-time users while ignoring the true drug criminals. In fact, they’ve even armed the drug gangs as revealed in the Fast and Furious scandal. We have a Justice Department more concerned with going after whistleblowers of crimes than the criminals themselves. The FBI deserves a whole section unto itself given their recent behavior. The only “terrorists” they’ve caught since 9-11 are the ones they have created with their own material support. Further, the FBI is increasingly using illegal surveillance tactics for peaceful activists like Occupy demonstrators and others. It has recently been revealed that the FBI was actually spying on Occupy protesters at the behest of banks, not the government, even refusing to tell Occupy leaders that there were assassination plots against them. Finally, it must be noted that no bankers have gone to jail from the immense fraud that led to the financial collapse of 2008 and beyond; no one significant has gone to jail for torture and other war crimes; and government corruption has been all but legalized.

#6 – Spy Agencies: The nation’s 17 spy agencies, including the CIA and the National Security Agency (NSA) – annual budget $55 billion? Many  of the intelligence accounts are classified, so we can’t really know  the true total, but we do know that the budget for spy agencies has doubled since 9/11. The NSA has grabbed the most attention as of late with  plans to expand into their new $2 billion data mining center in  Bluffdale, Utah set to launch in September of this year. Whistleblowers like William Binney have stated that the agency is already spying on its own  citizens domestically. As the war on terror increases its scope through drone surveillance on American soil, the NSA’s budget will only increase, while increasing the danger posed to large sections of the U.S. Constitution. The CIA of course has long been implicated in using assassination rings to topple foreign governments and political opponents, while being at the center of the Guantanamo Bay and rendition torture apparatus. With the arrival of no-holds-barred legislation like NDAA 2013, the intelligence regime becomes more dangerous than ever.

#5 – Department of Education (ED) – annual budget $70 billion: The way that America has chosen to educate its youth is the beginning of the justifications for the abuses of every other federal agency. The Deliberate Dumbing Down of America, as Charlotte Iserbyt has called it, has resulted in a once independent, entrepreneurial nation becoming a collectivized horde of selfish, but not individualistic, youth. There is much less attention paid to vocational skills, and much more attention paid to training the next bunch of public officials or bureaucracy enforcers. Furthermore, the public school system is clearly engaging in prisoner training with the actions of children becoming criminalized at an ever-greater pace. With the recent CT school shooting, we can expect that this will now become part of the curriculum as justification for the surrounding police state will be taught as a logical consequence in the face of such random threats of terror.

#4 – Department of Homeland Security (DHS) annual budget $100 billion (3,000 page PDF):  – Much like the Department of Defense, the activities of DHS are  all-encompassing including the goon squad of the Transportation Security  Administration (TSA), which has employed untrained, low IQ, and criminal  elements including pedophiles to reach into the pants of men, women and  children. The TSA is also responsible for introducing cancer to its  employees and the public through its backscatter radiation naked imaging  machines. And now they are set to hit the streets across America with  their spin-off VIPR teams. DHS has set up the ultimate framework for  tyranny, including secret lists, secret arrests, activist surveillance,  biometric immigration measures, control of cyberspace, Orwellian telescreens and PSA’s that increasingly portray average citizens who are  engaged in normal activities as worthy of suspicion and interrogation.  They are sure to be on the front lines of any gun control and  confiscation initiatives, as they clearly have been stockpiling their own ammunition in ever greater numbers.

#3 – U.S. Department of Agriculture (USDA) – annual budget $155 billion:  If there is one agency that is administering the globalist directives of Agenda 21, it is the USDA. They have recently begun putting dubious embargoes on small farms, which is leading to economic and literal starvation of people and animals alike. Through their trickle down directives, farmers can even be charged in a different county after being cleared of wrongdoing in a previous case. This is the hallmark of bureaucratic tyranny. The USDA has been instrumental in clearing Dow Chemical’s GM soy, giving Monsanto’s GMO crops special ‘speed approval,’ and covering up pesticide damage to humans and bee populations. But in true absurdist bureaucratic style, the same organization that has consistently overlooked the health and economic threats to countless millions of people decided to fine a family $4 million dollars for selling bunny rabbits.

#2 – Department of Health and Human Services (HHS) – annual budget $892 billion – This gargantuan structure includes the FDA, CDC and the National Institutes of Health among others. The FDA has its own annual budget of $4.5 billion. This agency has approved prescription and over-the-counter drugs that knowingly have killed hundreds of thousands of people annually, has increased irradiation of the food supply, and has covered up vaccine injuries, But if you want Big Pharma, you can get it from a vending machine, thanks to the FDA. No surprise, the FDA has ties to Monsanto and ties to Bayer.  Now our food is being made and modified by the largest pesticide manufacturer, while any move to label GMO is shut down by the agency. The FDA has additionally approved AquaBounty’s GE Salmon despite a statement by The Center for Food Safety, that its “bad for the consumer, bad for the salmon industry, and bad for the environment.” Among other gems are dangerous animal feed additives, approving dangerous anti-viral drugs for infants, and policing food safety in foreign nations.

As for the CDC, or Center for Disease Creation as some natural medicine practitioners have coined the agency (budget $11 billion), they have encouraged vaccination to such an extent that some have questioned whether their mandated vaccine schedule is part of a compulsory sterilization program.

#1 – Department of Defense (DoD) – annual budget ??? – Officially $613 billion This agency is in desperate need of returning to its more honest original name: The War Department. In addition to being the recipient of the highest percentage  of the federal budget, the DoD’s Defense Advanced Research Projects  Agency (DARPA) division almost deserves a category of its own. Many of  DARPA’s projects fall into the money pit of “black budget” secret projects  not even subjected to presidential and congressional oversight. With  DARPA’s “mad science” reputation, it is no doubt one of the top  recipients of the $50 billion annual black budget, making this one of  the most dangerous federal agencies to both the economy of the U.S. and  to world peace. Overall, the Department of Defense as the coordinator for anything that falls under “national security” is responsible for openly killing millions and eviscerating the Constitution … and there is no sign that they are letting up any time soon.

The Substance Abuse and Mental Health Services Administration (SAMHSA) – annual budget $3 billion: This agency falls under HHS, but the video below demonstrates a special level of corruption and worthlessness that is humorous, except for the fact that it represents a staggering level of taxpayer looting, despite the small size of the agency (537 people). It is a microcosm of what we only can imagine going on within the larger agencies, especially those with less oversight.

The government’s track record for permitting massive looting of the economy in collusion with the private banking sector; the upcoming collusion with the insurance industry and Big Pharma to change the landscape of healthcare; their collusion with private contractors to implement a prison-industrial complex; their unconstitutional war machine, and their history of secret human experiments makes government the single greatest terrestrial danger we face. In the 20th century alone, governments across the world outright murdered 290 million people, known as democide. How many more must have fallen to covert means and bureaucratic ineptitude? How many more will follow?