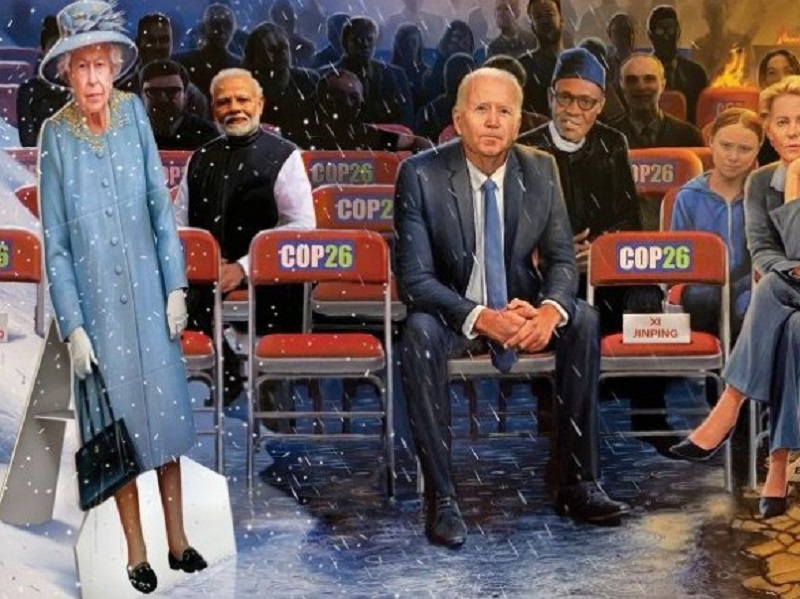 Some 25,000 heads of state, environmental activists, business leaders and journalists arrived in Scotland on Sunday for the climate summit. TIME magazine has dedicated a new cover to the upcoming climate summit in Glasgow from October 31 to November 12.

Climatologists say this year’s United Nations conference is critical if the world wants to keep the temperature rise 1.5 degrees Celsius above pre-industrial levels.

Although climate summits are held annually, diplomats and academics say the decisions made in the next two weeks will be the most important since the 2015 Paris Agreement. While many believe that getting the leaders together in one room is the key, hopes for a big breakthrough are dim.

The Devil is in the details

The Time photo shows the adjacent chairs – for the leaders of Brazil and China – empty, and instead of Queen Elizabeth II (she canceled her participation) there is a cardboard figure. Greta Thunberg can be seen in the second row.

Joe Biden is like the central figure. But is it really so? Let’s see how he sits:

For Joe Biden, hand barriers are completely uncharacteristic: he never pushes them between his knees and so, to bring your hands in front of you, straighten your back and lift your face up – this is Barack Obama:

Therefore, if you photoshop Biden’s face in the TIME picture and ask someone to guess which famous politician is sitting there, anyone will probably say that it was Obama who drove it to the summit.

In the light of this, as well as taking into account the assumption of conspiracy theorists that Biden and Kamala are like decorative figures controlled by Obama sitting in the shadows, one might think that Biden is not depicted in the TIME picture.

The second strange character is a cardboard figure depicting Elizabeth II. The official explanation of the cardboard is that the queen did not come to the summit to see Greta, although there is practically no distance from London to Scotland. But is it really so? Or maybe this is a hint that the queen is not real on the TV, but a computer graphics product?

The third curious item in the foreground is Xi Jinping’s chair. It is not very clear: is it reserved for him, is he expected, or will he never come again and will soon be led by some other senior figure?

Another empty chair belongs to Jair Bolsonaro, President of Brazil. The empty chair of the Chinese side is formally explainable: Xi did not find time to move across the entire planet to listen to Greta live. But it seems that Brazil will be represented at the summit, and the chair is empty, covered with a snowdrift.

Next come third plan figures such as Mohammad Bukhari, the supreme leader of Nigeria. He sits behind a character depicting the President of the United States.

The question is, where are the other top leaders? Is this a hint that soon, countries like France will move to the Stone Age and only America, India and Nigeria will remain on the planet? Or is it a hint of the division of the world under the New World Order, where there will be no countries, except a selected predefined alliance group, leaded my Barack Obama as the head of this planetary agglomeration.

The figures of the other rows could not be recognized by the conspiracy theorists because they were blurry, but the last one strained everyone – it is very similar to a crowd of zombies wandering somewhere among the snow, the fire and fog.

Is this really what the world is waiting for if the top leaders at COP26 fail to agree? Or are they agreeing just about this? The conspiracy theorists are eagerly awaiting future developments.

In this article:COP26, Time magazine