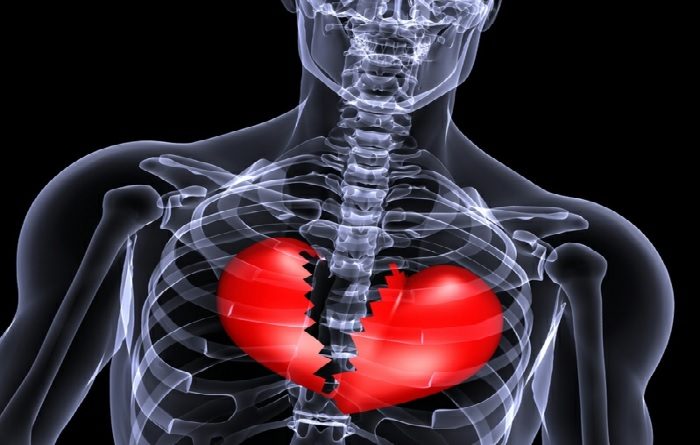 Songwriters, poets and novelists have long mused over whether time truly heals everything.

Charles Dickens toyed over whether the bitter Miss Haversham would ever recover from being jilted at the altar, and for many historians, Queen Victoria’s black dress came to symbolise her irreparable suffering over Prince Albert’s death.

But a new study has apparently put their agonising to bed and concluded that not even the clock can always mend a broken heart.

A team of medical researchers from the University of Aberdeen have said that so-called “broken heart syndrome” can leave physical scars that never recover.

British Heart Foundation-funded study followed 52 patients over four months, aged between 28 and 87, who suffered with what is officially known as takotsubo syndrome.

The little-known condition was first coined in Japan in 1990 and named after the native word for an octopus pot, which has a unique shape that resembles a broken left ventricle.

It is provoked when the heart muscle is suddenly “stunned”, causing the left ventricle to change shape, and is typically prompted by “intense emotional or physical stress”.

It affects the heart’s ability to pump blood and, according to the BHF, there remains no known medical cure.

Around 3,000 people per year in the UK suffer from the rare syndrome, which mostly affects women.

“This study has shown that in some patients who develop takotsubo syndrome, various aspects of heart function remain abnormal for up to four months afterwards,” said BHF associate medical director, Professor Metin Avkiran.
“Worryingly, these patients’ hearts appear to show a form of scarring, indicating that full recovery may take much longer, or indeed may not occur, with current care.

“This highlights the need to urgently find new and more effective treatments for this devastating condition.”

The team in Aberdeen used ultrasound and cardiac MRI scans to look at how their patients’ hearts were functioning.

The results showed that the syndrome permanently affected the heart’s pumping motion and delayed the “wringing” motion made by the beating heart.

The heart’s squeezing motion was also affected, and parts of the heart muscle suffered scarring, which affected its elasticity and prevented it from contracting properly.

Dr Dana Dawson, reader in cardiovascular medicine at the University of Aberdeen, who led the research, said: “We used to think that people who suffered from takotsubo cardiomyopathy would fully recover, without medical intervention.

“Here we’ve shown that this disease has much longer lasting damaging effects on the hearts of those who suffer from it.”

Figures show that between three per cent and 17 per cent of sufferers die within five years of diagnosis.

Around 90 per cent are female and the stressful trigger – often associated with the sudden death of a loved one – is identified in around 70 per cent of cases.

In the majority of cases however, the left ventricle returns to normal over a few days, weeks or months.

Clinicians will usually follow up with regular echocardiograms, and unless a patient has an underlying heart problem, no further treatment is necessary.

The BHF says more research is needed to establish whether takotsubo cardiomyopathy can be passed down through family.

Journalists speculated whether actress Debbie Reynolds’s death in December – one day after her daughter Carrie Fisher of Star Wars fame – was caused by a broken heart.

Son Todd Fisher, however, said she just wanted to be with her daughter.

The study is published today in the Journal of the American Society of Echocardiography.

Advertisement. Scroll to continue reading.
In this article:broken heart