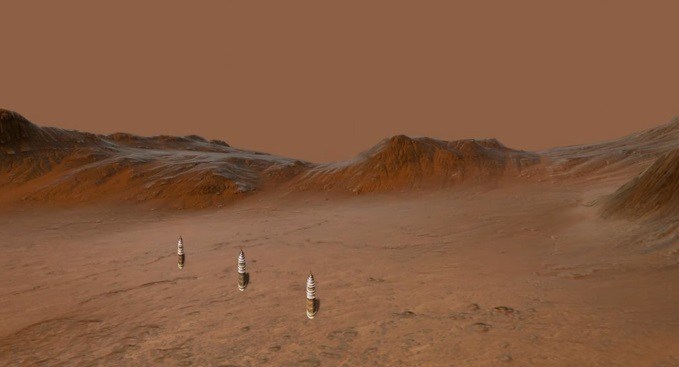 The Red Planet always shocks us with different wonders, expanding our point of view for this allegedly desolate planet. Artificial towers on Mars is just one of the many enigmas on the list. Interestingly, all of them are on the same straight line.

The three artificial towers were published on a YouTube video channel called mundodesconocido. Turn on the captions and observe it before someone bans it.

In a promotional announcement for the video, the channel said it believes they could have been built by intelligent aliens.

Jose Luis, who administers the channel, analyzed the Red Planet aided by Google Mars Map. While investigating, he managed to discover a fascinating row of gigantic artificial towers on the surface of Mars. Each one of them measured around a mile, according to Luis.

This would be a very remarkable architecture achievement regarding the tallest building on Earth is only half of their size.

Google employed information from the Mars Global Surveyor (MGS) and its photographic instrument. This particular image depicting the towers was taken in 1999. Thus, a lot could have changed in the past twenty years.

These towers position in a Martian region called Terra Meridiani. NASA chose this exact same area as a landing spot for Curiosity Rover. So you judge whether it’s a coincidence or not.

The rover could have been leaving trails at the base of these towers. Even more, if we ever manage to conquer a manned mission on Mars, these towers could provide us with an incredible knowledge.

The area these towers are located looks like it’s set precisely for its equatorial position. .

It is even more stunning how these artificial towers managed to survive such a long time. This stands behind the skills of whoever created them. Even more, it might suggest somebody still uses them.

However, NASA experts, who are currently investigating the Martian surface, claim the structures are only rock formations.

They say all these discoveries are the effects of pareidolia – a phenomenon when they brain tricks the eyes into seeing familiar objects.

On the other hand, the author and many others believe it’s not a coincidence. Especially, because the supposed towers seem to show signs of advanced technology.