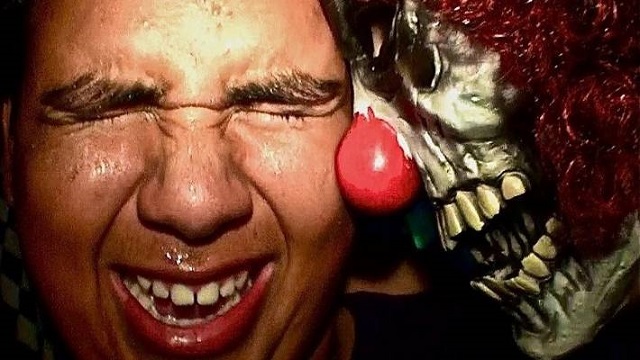 McKamey Manor in Summertown, Tennessee may lay claim to being the world’s scariest haunted house. It’s so scary that no one has ever completed it — but if you do, you’ll win $20,000.

All it costs to enter is a bag of dog food. Russ McKamey, the owner and mastermind behind the manor, has five dogs to feed.

The haunted house has several eye-popping preconditions. Contestants who want to enter must get a letter from their doctor asserting they are physically and mentally fit, and there’s a drug test day-of. Signing the 40-page contract alone takes three to four hours. Oh, and you have to have medical insurance because you’ll probably get hurt.

“I’m a very straight laced conservative guy, but here I run this crazy haunted house that people think is this torture factory, fetish factory,” McKamey told local news WFLA. “All of these things that it’s not, but people believe that based upon the films that I have made.”

McKamey concocts each “show” for every individual contestant who visits, cooking up particular stunts and tasks suited to their particular fears. It’s been featured on the Netflix show Dark Tourism and Haunters: The Art of the Scare.

McKamey is adamant that nothing weird goes on in the manor, despite a report from The Guardian that said visitors may be “bound, masked and held under water, slapped and stomped on, and compelled to eat your own vomit” during the eight-hour tour — if they last that long. McKamey insists it’s a more of a “mental game” between him and contestants, which he wins using hypnosis.

Each contestant’s entire journey through the manor is filmed, which McKamey says is to protect himself against false accusations.

“When I use the hypnosis I can put you in a kitty pool with a couple inches of water and tell you there’s a great white shark in there, and you’re gonna think there’s a shark in there,” he told WFLA. “And so, when you have that kind of power over people, and have them do and see things that you want them to see, then they can leave here thinking it really happened, and they’ll go to the authorities and say, ‘oh, whatever,’ and I have to come back and show the footage and say, ‘it didn’t go that way at all.’”

There’s also a required two-hour video you must watch if you think other people are sissies and you’re made of stronger stuff. “And Then There Were None” is one hour and 48 minutes of people giving up the haunted house, telling the camera and future visitors “you really don’t want to do this.”

If you think you’ve got what it takes, you can contact McKamey online to set up your own terrifying tour. For something a little less terrifying, here are houses with haunted pasts you can visit without signing away your life.

In this article:Dark Tourism, McKamey Manor