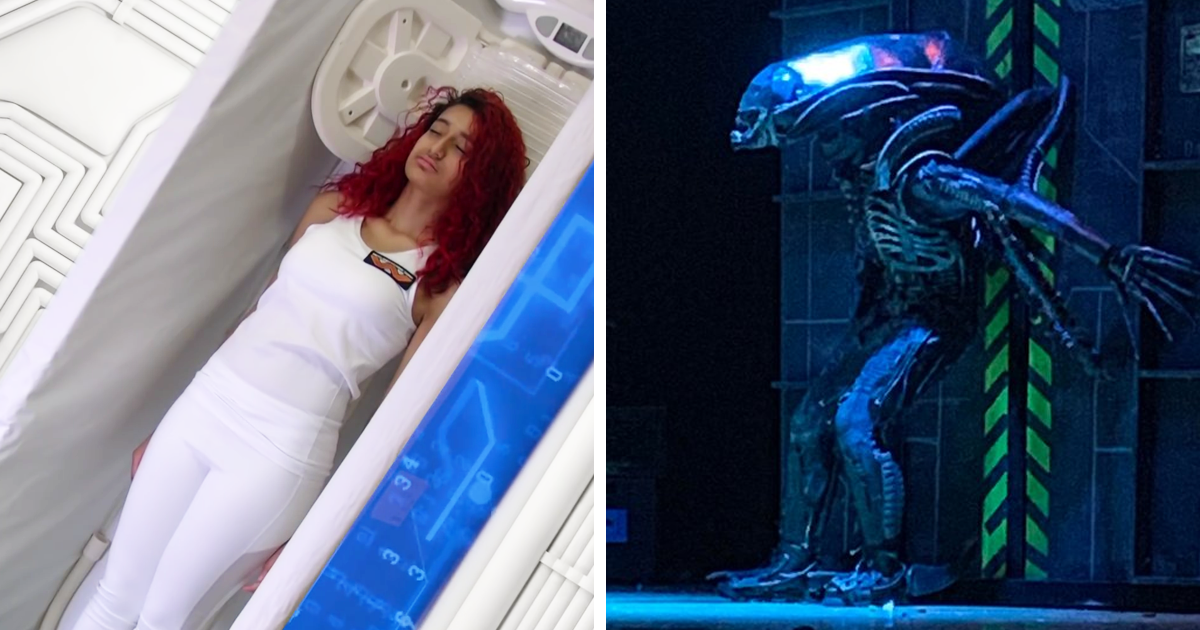 Many people say that kids are the future and it’s hard to disagree when they show how truly creative, innovative and dedicated they are. New Jersey’s North Bergen High School drama club students recently proved that when they performed their own take on the 1979 science fiction horror classic Alien. The group turned Ridley Scott’s masterpiece into a stage play that was performed only twice, on March 19 and 22, 2019.

As images of the play surfaced on the internet, people’s interest increased and the snaps, as well as footage, were shared on such platforms as Twitter and Reddit. People were not only impressed by the club’s decision to turn the 1979 film into a play but also how impressive the props and the scenes (like the facehugger one) were.

Turns out, the xenomorph suit, as well as other costumes, were made using recycled materials. The art director and teacher, Steven Defendini often sifts through garbage to recycle someone’s trash into truly impressive art. As his girlfriend reported on Twitter, the funding for the school’s district was cut some years ago, forcing to find other means to make things like this play happen.

Fortunately, instead of brooding over the unfortunate funding situation, Steven uses this as a perfect opportunity to inspire his students to adapt and overcome by being resourceful and creative. Luckily, the drama club kids sure don’t lack creativity as the play shows.

They even filmed a pretty impressive trailer for their two shows, showcasing the cast and the setting of the play. The information on the trailer reports that the tickets to the show cost a respectable amount of $5.

As for why the club chose ‘Alien’ for their production, there were a few reasons for it. “I believe the idea spurred up because the teacher in charge of the entire operation, Mr. Cuervo, saw a failed production and it being the 40th anniversary,” Justin said. “I think everyone’s reaction to it being Alien was similar to mine where I was just like “That’s crazy. How are they pulling this off?” he recalled his colleague and his reaction to the announcement of the idea.

“Unfortunately there are many people assuming that we are from Bergen County and are extremely rich” Pierson added, addressing the production costs. With no budget, the students only had motivation and creativity to work with, and they definitely pulled it off. “Kids are extremely motivated and passionate about what they are doing” the student concluded.

“The people were blown away. There were a lot of gasps and “awes” in the audience on opening night.” Justin commented on how the audience reacted to their production and the massive set they’ve constructed from garbage. “Then on the second night, people came […] just to see it again,” he reported.

Watch the trailer of the play below

Anyone who managed to stick it out through Prometheus probably already had knew that Ridley Scott has a thing for ancient alien theories. Now,...