As soon as Kailyn Griffin’s feet hit the floor Wednesday morning, she collapsed in a heap.

The 5-year-old kept trying to stand but fell every time. She was also struggling to speak, her mother Jessica Griffin noticed.

Her daughter had been fine when the family went out to a T-ball game the night before, NBC-affiliate WLBT in Jackson, reported. Maybe Kailyn was having a hard time waking up Wednesday morning, or perhaps her legs were asleep.

Then Griffin saw the tick. 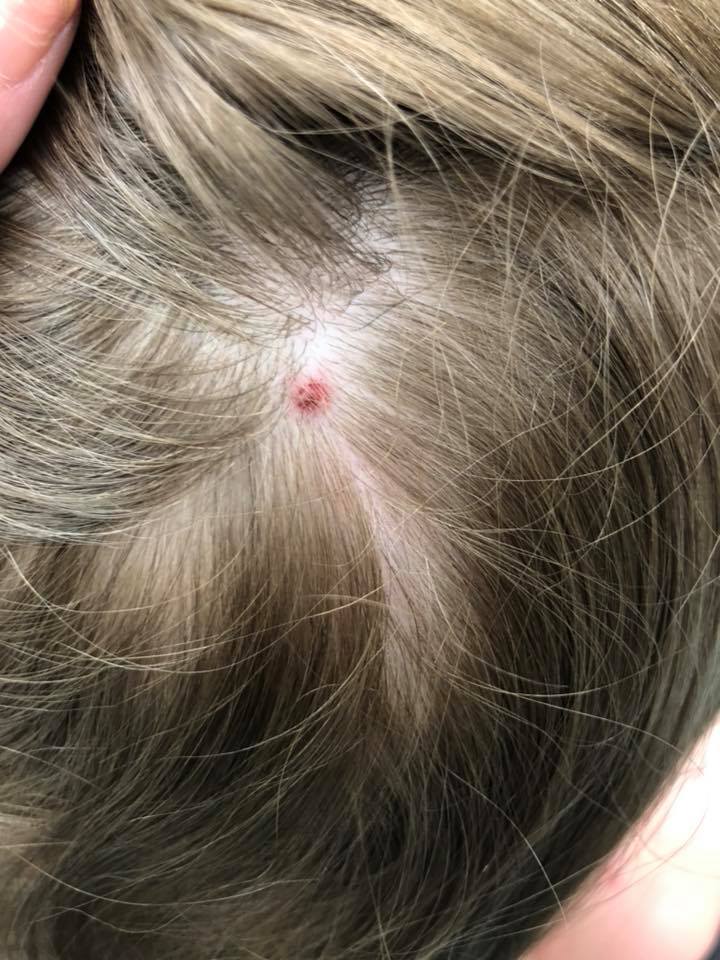 She had gathered Kailyn’s hair to put it in a ponytail when she spotted the insect, embedded in the girl’s scalp, swelled with the girl’s blood.

She pulled the tick out and placed it in a plastic bag, then rushed to the hospital with Kailyn, WTXL reported. Doctors told Griffin it was an uncommon condition called tick paralysis.

“After tons of blood work and a CT of the head UMMC has ruled it as tick paralysis! PLEASE for the love of god check your kids for ticks! It’s more common in children than it is adults!” Griffin, of Grenada, Mississippi, wrote in a Facebook post Wednesday that seemed a mixture of worry and relief.

“Scary is a UNDERSTATEMENT!”

Griffin could not be immediately reached for comment. It was unclear where or when she thought her daughter had acquired the tick, or how long it had been on her body. Ticks are most active from April through September, The Washington Post has reported.

Tick paralysis is caused by female ticks on the verge of laying eggs. After the tick eats a blood meal and is engorged, it secretes a neurotoxin into the host, according to the American Lyme disease Foundation.

The symptoms can occur five to seven days after the tick starts feeding.

Paralysis begins in the legs, then spreads to the upper extremities. It can manifest as fatigue, numbness and an increasing inability to move, according to the foundation.

In the later stages it is harder for the victim to move her face or tongue. If nothing is done, the toxin ultimately makes it impossible for a person to breathe, resulting in respiratory failure.

The paralysis is more common in animals, which are unable to check themselves for the ticks.

But human children are also susceptible because of their smaller body mass. Girls get tick paralysis more frequently because the ticks can easily hide in a mass of hair, according to the foundation.

The CDC reported a cluster of cases of the extremely rare disease in 2006. One of the victims was a 6-year-old girl who had trouble walking a week after visiting her grandmother in the mountains of Larimer County.

A nurse bathing her after she was admitted to the hospital found a tick along her hairline.

And last year, Amanda Lewis woke up and found that her 3-year-old daughter, Evelyn, couldn’t stand no matter how hard the little girl tried, according to the La Grande Observer.

The La Grande, Oregon, woman posted a video on Facebook, hoping family members or friends could help figure out what was causing the girl’s sudden strange ailment. They couldn’t, but the video was watched some 22 million times and shared more than 600,000 times.

At the hospital that day, physician John Page saw that a 3-year-old had been admitted with ataxia and suspected that it might be tick paralysis.

He scoured the girl’s scalp and found the insect, which was embedded in the skin and could have been easily dismissed as a red bump.

Once it was removed, Evelyn was walking the next day.

Her mom’s last picture of the incident showed the girl grasping two balloons in a hospital hallway.

“Look who is WALKING out of the hospital! Everything is completely back to normal!” Griffin wrote, including a raised hands emoji. “GOD IS GOOD!!”

This article was originally published by The Washington Post.

Advertisement. Scroll to continue reading.
In this article:paralysis, tick