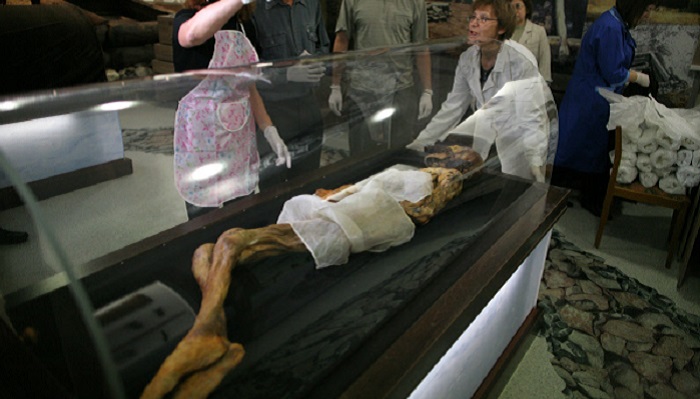 In 1993, a well-preserved body of a woman was found in the Ukok Plateau (Ukok), territory near the border of Russia, Mongolia, China, and Kazakhstan.

After 2017, some new details are known about the Ukok woman who died about 2,500 years. It can be said that the secret of “Princess Ukok” is revealed. She was dying of breast cancer.The mummy is called Princess Ukok in honor of the same plateau in the Altai Mountains where her ancient funeral was discovered. At the time of her death, she was approximately 25 years. The woman’s body was buried there about 2,500 years ago.

Most likely, Princess Ukok was of a noble family and belonged to the Pazarak tribe, who have lived in the area for many centuries. The Ancients nomadic tribes of Pazarak were first described in the 5th century BC by the Greek historian Herodotus.

The young woman was buried in a remote area, with six horses and two men, probably warriors. It is known is that only representatives of noble families have been “rewarded” after death with such distinctions.

Princess Ukok’s body is perfectly preserved as it has been frozen forever. On her left shoulder are complex animal tattoos, including deer, griffin and capricorn.

The tattoo drawings were restored by Elena Shumakova, an employee at the Institute of Archeology and Ethnography at the Siberian Branch of the Russian Academy of Sciences.

Tattoos are also visible and on the shoulder of one of the warriors. By design, they are similar to those found on Princess Ukok. The skin was apparently pierced with a needle or other sharp object, and is rubbed with a mixture of soot and fat.

Apart from everything else, archaeologists find ornaments of felt, wood, bronze and gold, as well as a small box with hemp at the funeral …

Long time ago, archeologists did not understand why Princess Ukok died. But, Siberian scientists conduct new studies that open the veil of secrecy to the circumstances around the death of Princess Ukok.

NMR scanning in Novosibirsk showed that “Princess Ukok has been suffering since her childhood with osteomyelitis, and shortly before her death, the woman apparently fell from a horse. Dislocated joints and skull fracture were found.

However, experts have identified something much more significant. The study shows that when Princess Ukok was just over 20, she became ill with breast cancer …

In about five years it had destroyed her body. In all likelihood, the young woman was in intense pain. To ease her grief, the woman smoked hemp.

Dr. Letyagin, employee at the Institute of Physiology and Fundamental Medicine of the Siberian Branch of the Russian Academy of Medical Sciences in Novosibirsk commented:

“I’m absolutely sure of the diagnosis, and it’s cancer. She was extremely exhausted. Maybe the woman went to the Ukok Plateau deliberately to die. At the time of death, the tumor in her right chest had already metastasized. It has affected the lymph nodes and spine. When Princess Ukok arrived at the winter camp on the Ukok Plateau, she was already in the fourth stage of breast cancer.

The woman was tormented by intense pain. The intoxication led to a loss of physical strength. Apparently in this condition she fell from the horse and suffered a serious injury. Judging by the results of the NMR, on the way to the camp, she fell from the horse on her right side, struck her right temple, injured her right shoulder and right thigh. But her right hand was not injured. Most likely, it was pressed against the body. I guess her right hand was already inactive. “

According to scientists, Princess Ukok has died three months after falling from a horse. She is not buried in the row of family graves, and on a separate lonely hill, visible and outdoor space.

Breast cancer has been known to mankind since the days of the ancient Egyptians. A thousand years before it was described by the father of modern medicine – Hippocrates.

In this article:Pazarak tribe, Princess Ukok