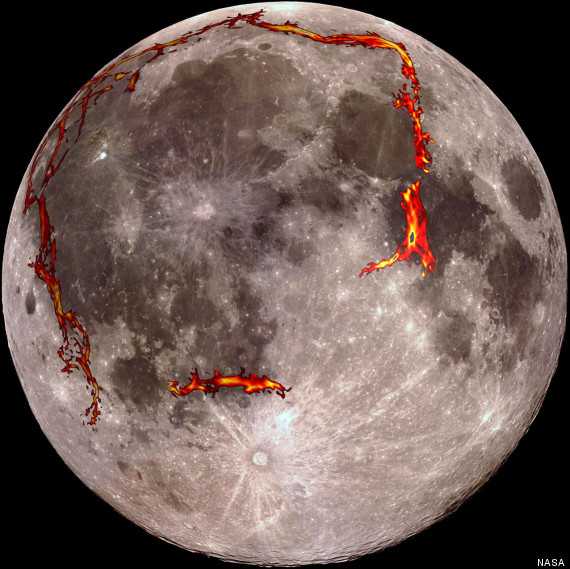 Usually when someone on the internet writes about ‘geometric forms’ found on the Moon, it’s a crazy UFO hunter who doesn’t understand pixelation of composite images taken at high altitudes.

Scientists report that rifts across large areas of the Moon’s surface actually forms an enormous rectangle.

The area in question is the Ocean of Storms, an enormous and obvious feature of the Moon which was once thought to literally contain an ocean.

In the modern era of astronomy it has been understood – of course – that the ‘Ocean’ is actually just another area of basalt rock (the technical term is ‘maria’, which is just Latin for ‘sea’).

But it had always been assumed that the shape was a 2,000-mile-wide crater caused by an asteroid impact – and represented a lucky escape for Earth.

Now they’re not so sure. In fact a new study suggests that the ocean was actually caused by cooling lava on the early Moon – and that the satellite was actually far more active and dynamic than we used to think.

The discovery was made using data from NASA’s GRAIL mission, which mapped the gravity of the Lunar surface in exquisite detail. The images revealed that the topography of the surface in the area is almost a perfect rectangle – indicating it formed as the Moon’s surface moved apart from itself.

“GRAIL has revealed features on the moon that no one anticipated before we had this data in hand,” said lead study author Jeffrey Andrews-Hanna, a planetary scientist at the Colorado School of Mines, according to Space.com. “One can only wonder what might lie hidden beneath the surfaces of all of the other planets in the solar system.”

In this article:Colorado School of Mines, moon, Nasa, Oceanus Procellarum