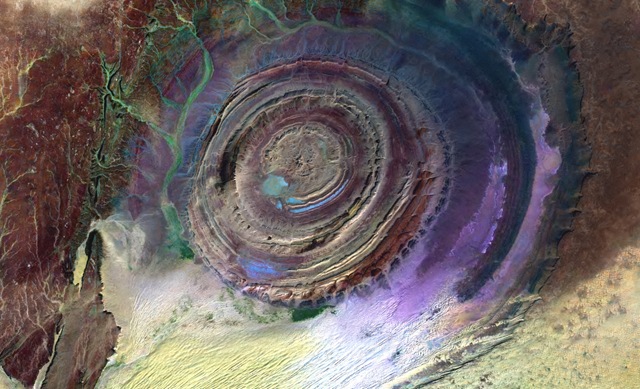 Throughout the history of this African desert, tens of thousands of people have gone missing in its vicinity, and this is only according to official data. The sand is much more destructive than the ill-fated Bermuda Triangle. This is understandable, five thousand kilometers covered with sand.

Scientists know for certain that millions of years ago there were rivers, lakes, flowering gardens and, most likely, even the ocean in the desert, since numerous whale fossils were found in the sands.

The ruins of cities, underground canals, through which water once flowed, were discovered. In one of the Sahara caves, ancient drawings and hieroglyphs were found, depicting humanoid creatures, around which there was greenery and water. There are a lot of mountains in the desert, where people have never been.

Perhaps the most mysterious place in the Sahara is rocky terrain with melted earth and traces of radiation. At this place, according to scientists, an explosion of incredible power thundered. There is a theory that all this is due to the fall of a meteorite.

This is confirmed by the chemical elements that scientists find in glass and iron. These elements are of unearthly origin, and most likely came to us with a meteorite. Moreover, the crater itself is hidden somewhere under the sands, and has not yet been found.

If you look at the desert from space, then the first thing that can be seen is the rings, called the eyes of the Sahara, with a diameter of more than fifty kilometers. There are rocky rocks near the rings that are not found anywhere else on Earth. The stones themselves are most likely solidified lava.

But all these secrets and riddles are not studied in detail, since archaeological and scientific expeditions are officially prohibited on the territory of the Sahara, due to safety. On the territory of the desert, armed conflicts constantly occur, which are a great risk for scientists. This is what official sources say.

The desert can be easily studied from space, by analogy with, for example, Mars, where in the infrared range, with the help of orbiting satellites and telescopes, you can recognize artifacts, as well as make new discoveries. Unfortunately, this does not happen.

The Sahara Desert, along with the oceans of the Earth, remains the least studied.