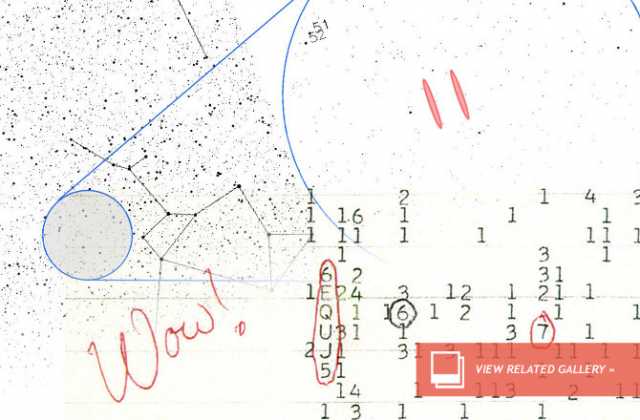 SETI, the search for extraterrestrial intelligence, has seen astronomers scouring the sky for decades in hopes of receiving artificially generated radio signals sent by alien civilizations. But then, there’s a good chance we’ve already found just such a signal. And 1977 saw the most tantalizing glimpse ever.
Nicknamed the “Wow!” signal, this was a brief burst of radio waves detected by astronomer Jerry Ehman who was working on a SETI project at the Big Ear radio telescope, Ohio. The signal was, in fact, so remarkable that Ehman circled it on the computer printout, writing “Wow!” in the margin — and unintentionally giving the received radio signal the name under which it would become famous.
Despite a lot of effort, no identification has been found for the signal’s source, and no repeat signal has ever been found. It’s a complete mystery. The only conclusion that can be drawn is if the signal truly did originate in deep space, then it was either an astrophysical phenomenon of which we’ve never seen before, or it truly was an intercepted alien signal.
To explain scientific observations, the normal method is to construct hypotheses and then test them. If your hypothesis is incorrect, it will fail to explain the observation. You can then continue this way, using different hypotheses, until you find something which can accurately describe what you’ve observed (if you ever watch Mythbusters, you may be familiar with how this works).
But with the Wow! signal, researchers ran into difficulty. After trying and failing to find any repeat of the signal, Ehman was skeptical of its origin, stating that “something suggests it was an Earth-sourced signal that simply got reflected off a piece of space debris.” But when he tried to investigate that explanation, he only found more problems.
Investigations found that it was scarcely possible the signal could have originated on Earth, and reflection off a piece of space junk was equally unlikely. The received signal was very specific, and these explanations required too many assumptions. A pattern of logical thinking known as Occam’s razor was pointing towards this signal having an astrophysical origin. But this provided no explanation for what it might be.
The curious Wow! signal is more or less a perfect match for what would be expected from a received extraterrestrial transmission. It’s been closely analyzed as a result, but to date no one has come up with a satisfactory explanation for where the signal came from.
For a start, the signal’s intensity was observed to rise and fall over a period of 72 seconds, consistent with the rotation of Earth, and a single source tracking across the sky, through the Big Ear telescope’s view. This gave the signal a characteristic signature, caused by objects seen in the sky. It would be nearly impossible for any Earth-bound object to match it.