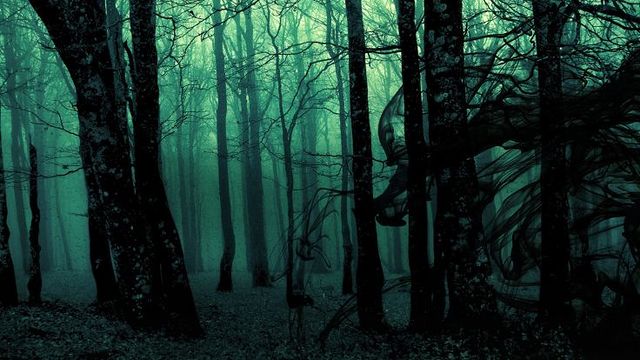 In many countries, you are surrounded by shadowy forests that seem to go on forever and as you get older, you began to discover bits and pieces of local lore that trickle down into campfire tales and scary bedtime stories. It seems sometimes that every forest has enough history to be haunted, which leads some people to having a Blair Witch Project reaction any time anyone suggested camping.

While these spots may have had their own merits, they didn’t have anything on the really haunted forests in the world. Here are the seven most spine-tingling, scream-inducing woods across the world that you should never, ever step foot in.

Let’s start this list off with something nearly every haunted forest requires: a violent history. Old House Woods in Virginia was home to many a gruesome battle during the Revolutionary War and American Civil War. As a result, people have reported the ghosts of soldiers and slaves between the trees, searching for a way out.

Adults tell local children not to venture into the woods, lest they never return. Those who were lucky enough to come back reported precipitous drops in temperature, spectral figures in military regalia, and misty women floating before disappearing completely. Apparently, these woods are privately owned, and the owner will call the police on trespassers if he sees one. Could he be protecting folks from an even darker force hidden in the forest?

Outside of Pluckley, also known as the “most haunted village in Britain,” are the Dering Woods. Despite having a normal name, most people refer to them as the Screaming Woods due to the fact that most visitors who happen upon them are bombarded with blood-curdling, banshee-like screams that are far from simply human.

These screams are said to go all the way back to the 18th century, when a highwayman named Robert Du Bois was captured by villagers and brought to the woods to be killed with a sword. Du Bois continues to harbor a grudge against those who find him in the woods. If you’re there and hear the sound of footsteps with no discernible body attached, run back the way you came.

Based on the circular trenches and distinctive stone arrangements, Ballyboley Forest in Northern Ireland is considered to be an ancient Druid site. From 1400-1700, this forest was notorious for the disappearances of several individuals without any explanation. The freakiness has only become more pronounced with time.

Very few people are willing to enter these woods, but those that did explore them have reported billows of black smoke and disembodied screaming voices in the distance. In one particularly terrifying episode, two men thought they heard a lady howling in pain. Leaving the path to attempt to find her, they discovered a tree dripping with thick strokes of blood. As they fled from sounds that started to encroach on them, one man turned around to see human-like figures in the forest, motionless and watching in brown head coverings. Stories like these have led people to believe that Ballyboley is a gateway to the Celtic “Otherworld.”

Part of the Bridgewater Triangle area known for a bevy of paranormal activity, the Freetown State Forest is where most of the haunting occurrences take place. Its haunted status goes all the way back to colonial times, when settlers purchased the land from the Wampanoag Tribe. This deal was dicey at best because the Native Americans believed the forest to be sacred (housing multiple American Indian burial grounds), and some consider this exchange to have driven it to be cursed.

The curse lives on into modern times as the area became synonymous with Satanic cults and murderous rituals. One famous case involved a local pimp named Carl Drew who slaughtered women as a sacrifice for his occultist leader. In an especially sadistic show, Drew ripped out a woman’s hair and fingernails before removing her head to kick around like a ball with his followers until he ended the ritual by raping her headless corpse. These dark forces continue to haunt the forest, leading visitors to feel pushed and prodded among sounds of heavy breathing and screams.

In horror movies, pets and other animals are often the first to recognize an otherworldly presence, but humans rarely heed their warning. In real life, things aren’t much different. Dogs are said to flee from the forest clearing known as the Devil’s Tramping Ground in North Carolina, a burnt, lifeless circle of ash where nothing ever grows.

The local legend goes that the circle of devastation is caused by the Devil, who uses this area to “tramp” and contemplate ways to destroy all of humanity. No vegetation or wildlife thrives in this circle, and scientists have taken samples to study this baffling phenomenon to no avail. Those who have tried to spend a night there either don’t last until sunrise or go mad. Stranger still, any inanimate objects placed in the circle overnight are thrown outside its limits by dawn, a result of the Devil brushing aside anything in his wake.

In an area often referred to as the Bermuda Triangle of Transylvania, the Hoia Baciu Forest is notorious for unexplainable paranormal activity. Though locals have long been terrified of entering those woods, the forest became notorious in 1968 after a biologist named Alexandru Sift recorded a UFO-like object hovering overhead.

Supposedly, the creepily curved trees grew normally for decades, until a supernatural presence warped them. Those brave enough to enter the forest have reported rashes, nausea, vomiting, migraines, and intense, debilitating anxiety while roaming the forest, especially the constant sensation that they were being watched. The most disturbing but repeated theory is that Hoia-Baciu is home to an interdimensional portal, which causes people to disappear and have no concept of how much time has passed.

The well-known “Suicide Forest” borders Mt. Fuji in Japan and has a depressingly accurate nickname. Since the 1950s, an estimated 500 people have journeyed to Aokigahara to end their lives, and the forest continues to beckon people to die. Those who have visited the forest as tourists have come across rotting bodies swaying from tree branches and skulls and bones littering the ground.

Due to the sheer amount of tragic death, the forest has become something of a purgatory, filled with ghosts known as yurei who howl with suffering for their lives that were ended too soon. Some say that the trees themselves are filled with a malevolent energy that wants to keep you in the forest, possibly explaining why so many choose to commit suicide there. Indeed, even those who have just gone to check it out have admitted feeling a sense of permanence, like they were bound to the forest for the rest of their lives.