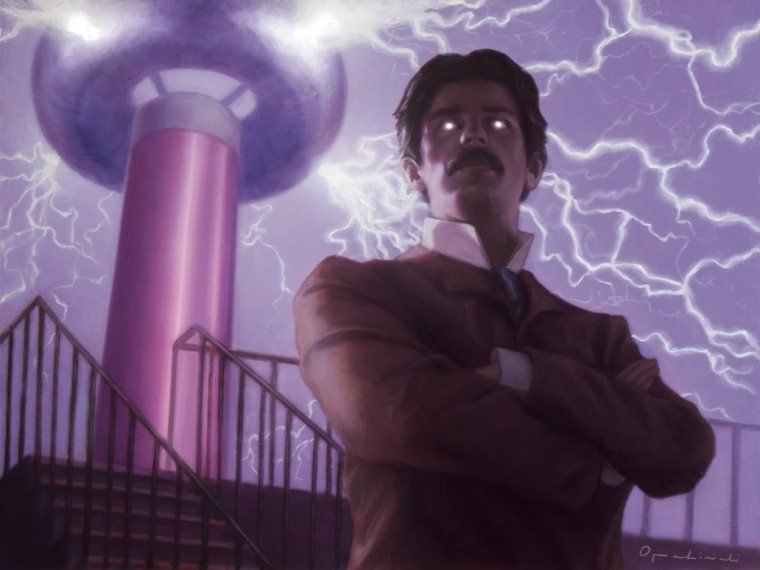 It was July 10, 1856 that he first saw the light of day at Smiljan (located in contemporary Serbia – modern day Croatia – which, at the time was part of the Austrian Empire) and through his life he has patented over 300 inventions.

Typically he is referred to as an inventor and an electrical/mechanical engineer who studied at Graz University and dropped out. It is curious that the person responsible for the basis of our modern science did not even finish his studies.

What is he responsible for? Let’s begin with alternate current (AC), high voltage transfers and high frequency power, without which we would still be using direct current and voltages up to 30 Volts. Then we go to induction motor, rotating magnetic fields, radio remote control devices and a project that he did not manage to finish, X-rays. Still doubt that he was a genius?

His thoughts and ideas made the other scientists of his era describe him as a “mad scientist”. And yet, people saw fit to name the unit of magnetic measurement after him. And yet, the Americans saw fit to offer him incentives to move to the U.S.A. and continue his work there. And yet, there were people that funded him with a lot of capital so that he would be able to complete his experiments and present his inventions. 300 of them. What a mad scientist!

But it is not his recognized work that is the scope of this article. It is his secret and unrecognized work that we will be discussing about. It is those theories that were regarded as so extravagant that earned him the title and yet, nowadays, they may have been put into effect, and no one acknowledges that they are based on the notions of a mad scientist 100 plus years ago!

Discoveries, experiments and notes that were hidden from the general public and were implemented solely on governmental and military projects with results that could threaten the entire world! What are they? Let’s begin: It has been confirmed that all bodies have a resonant frequency.

What is this frequency?

The one at which a specific body oscillates with greater amplitude. It is the frequency that can result to its destruction. Tesla stated that Earth had such a frequency around 1900.

What would the result of such a frequency be on earth?

The same as in Tacoma Narrows Bridge in 1940. The oscillation was so great that the bridge completely collapsed.

According to some scientists (unverified and unproven accounts) in intentional earthquake creation through magnetic induction to the magma chamber.

In as far back as 1899, Tesla produced artificial lightning in Colorado Springs consisting of millions of volts and as long as 135 feet. The thunder of the released energy was heard 15 miles away and people at Cripple Creek, Colorado, observed sparks between their feet and the ground and from water taps when they touched them. Through his high frequency experiments he destroyed a power station generator.

Does this sound like an electrical weapon to you? Could there be one or more hidden somewhere and we will not find out until it is too late?

During his tenure at Colorado Springs, Tesla experimented on atmospheric electricity. He received funding from J. Pierpont Morgan to construct the Wardencluffe Tower for the purpose of achieving wireless communication. In 1903 he stipulated at letters to his sponsor that this tower would be capable, apart from transmitting wireless massages, to transmit wireless electrical power. The experiment was never completed as Morgan interrupted the funding.

When was such a possibility confirmed? With the creation of mobile phones in 1947. It was dubbed as dangerous for humans due to the immense electromagnetic fields that would be formed as a result of the voltage differential required for such a transmission. But still the idea was valid and he was granted a patent for it.

In 1931 he claimed to have developed a theory that would put an end to Einstein’s theory of relativity. No one else has ever directly disputed this theory. Yet Tesla did. He never managed to put this theory into practice as he died. It is believed that these notes were confiscated by the FBI through the Alien Property laws after his death in 1943, even though Tesla had been awarded the American citizenship.

Unproven and unverified scientific claims place an application of this theory to the ex-Soviet construction of the Cosmosphere (the Russian operational version of the Star Wars defensive system) which includes machinery that supposedly is able to fly and move around taking advantage solely of Earth’s gravitational forces without any assistance from propulsion engines. The science behind this program remains a closely guarded secret, and until it is revealed we will not know if it is true that it took advantage of Tesla’s dynamic gravitational theory.

When was the Cosmosphere put in place? 80 years later than Tesla’s theory. After studying a Van de Graaff generator, Tesla stipulated theories about a weapon that he called “teleforce”. The contemporary press called it a “death ray”. As per Tesla himself, this would be a particle beam weapon capable of firing against ground and air targets, sending concentrated beams of such energy that could bring down 10,000 aircraft at a distance of 200 miles.

In 1937 he claimed that he actually constructed and tested such a weapon. This was again not made possible because of his death and any notes or prototypes would have been confiscated by the FBI. A treatise of this weapon is located at the Nikola Tesla Museum in Belgrade.

In 1958 the U.S. Advanced Research Projects Agency worked on such a weapon. It later claimed that even though the weapon was possible, it could not be constructed because the power requirements would be beyond the power generation capabilities. That was in 1958. Are we sure that it is not possible now? Almost a century after Tesla said he created it?

How far his concepts in the future were, is clearly stipulated by Emile Girardeau who assisted in developing France’s first radar system. He said that he did know if Tesla was prophesying or dreaming, but if he was dreaming, he was dreaming correctly.

Yiannis
Hi, I’m a wondering artist with a troubled mind looking for answers in theoretical physics, astronomy, quantum mechanics and the little secrets of mind and soul. I have a bachelor in applied nuclear technology and a master in computer science but nothing beats my bass guitar. I would love to have a golden retriever.

Advertisement. Scroll to continue reading.
In this article:Tesla