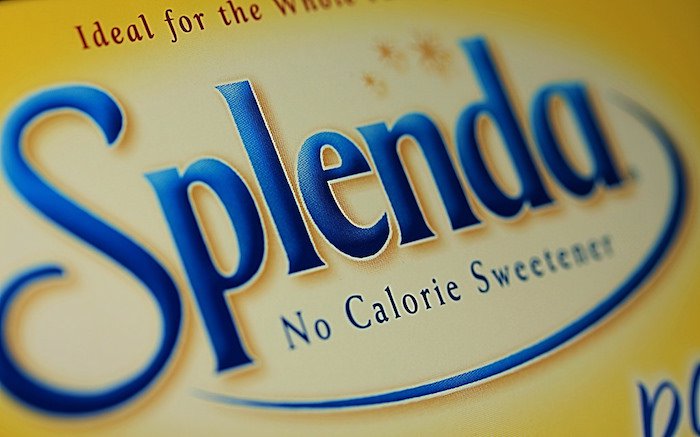 This article posted here with permission, from Greenmedinfo.com, written by the founder, Sayer Ji. For more news from them, you can sign up for their newsletter here.

Splenda is marketed as a no-calorie, no-guilt sugar substitute. Blood sugar stable, it “passes right through” the body, so it’s safe for diabetics AND you won’t gain weight! Are these claims masking the ugly truth about this chemical imposter? As mounting research shows, when it comes to our diet, there is no free lunch.

The allure is plain to see: a sweetener made from sugar, that tastes like sugar, but has zero calories. If the marketing is to be believed, this product is better than the real thing. It’s everything we love, with all of the evils removed.

When it comes to product marketing, beware the free lunch. Despite claims by the manufacturers that Splenda use is part of a healthy lifestyle, research is piling up that tells a very different story.

From the myth-busting studies linking Splenda to diabetes and weight-gain to sobering research showing increased risks of cancer, and more, our sucralose research portal reveals 22 different signs of trouble associated with this artificial sweetener.

Before we dive into the top reasons to avoid Splenda, let’s separate fact from fiction regarding exactly what this false promise really is.

The brand name “Splenda” refers to the chemical compound sucralose. The story of this substance does not attempt to conceal its bizarre origin: The year was 1974, when a chemist at a British college was told to “test” this new creation. Instead, he heard “taste,” which he did. The substance had an intensely sweet impact on the tongue, and like that, a new “food” was created for the public.

Although the product is touted as being derived from sugar, sucralose, aka Splenda, is not a form of sucrose, or cane sugar. Natural sugar is a hydrocarbon built around 12 carbon atoms. Sucralose is produced through substituting three hydroxyl groups (hydrogen + oxygen) with three chlorine atoms in the sugar (sucrose) molecule.

When sugar molecules are transformed into Splenda, they become chlorocarbons, the same chemical family as the deadly pesticide, DDT, disinfectants like Clorox Bleach, and the WWI poison gas, dichlorourea. Thanks to its sugary simulation, this dangerous toxicant has earned a place on grocery store shelves and in products worldwide.

You may be thinking, “The FDA would never approve this if it wasn’t safe.” Common sense dictates that trying to pass toxic chemicals off as foods would never be allowed to happen in civilized society, right?

Sadly, our collective past has proven that regulatory safety nets often fail to protect consumer safety. Artificial sweeteners like sucralose and aspartame are approved for sale in 90 nations around the world, despite overwhelming evidence linking them to a wide range of serious health conditions, such as cancer, liver failure, and brain damage.

But as concerns about sucralose mount, the scientific consensus is taking notice. A recent Italian study linking Splenda to leukemia in mice prompted the Center for the Public Interest in Science to downgrade the safety classification for Splenda from “safe” to “caution.”

New evidence indicates that many of the associated health concerns present at even lower exposure levels than the manufacturers would have us believe. “Use caution” may prove to be an understatement with serious health consequences.

How Much is Too Much?

While manufacturers go to great lengths to cherry-pick studies in which damage occurs only in high doses, research shows the amount of Splenda required to cause toxic effects is much lower than current guidelines allow. In fact, the acceptable daily intake of Splenda may be set hundreds of times too high to ensure safety.

In 1998, the FDA approved an acceptable daily intake (ADI) for humans of 5 mg/kg per day, based on toxicity studies in rats measuring observed effect level. This safety limit was based on observations of the rats’ outward presentations of disease symptoms.

Since that time, much has been learned about the importance of what is unseen in our biological ecosystem, namely the trillions of microbes that constitute the microbiome. Research into the impact of Splenda on gut health concluded that the observation threshold for adverse effects to the microbiome of rats was 454 times lower than when initially measured, indicating that significant effects are expected in humans who are consuming far less than the advertised acceptable daily intake of Splenda.

When you understand what Splenda is, and realize there is no regulatory safety net between you and harm, it makes understanding the facts about Splenda even more critical. Here are five alarming reasons to avoid this artificial sweetener.

Regulatory agencies may be slow to recognize the signs, but our bodies know immediately what is food, and what is poison. A recent study published in the European Journal of Nutrition concluded that rats metabolize sucralose in the same way they metabolize other harmful drugs and toxins. The body treats Splenda as a poison, and works fast to remove it.

Scientists found other toxicological issues with long-term exposure to sucralose. Bowel enlargement, kidney mineralization, and changes to pelvic tissue were some of the side-effects of doses well within limits of the allowable daily intake level set for humans.

These findings do much to disprove the manufacturers claim that this substance merely passes, unaltered, through the digestive tract. The makers of Splenda argue that this “remarkably stable” chemical transits, unchanged, into the urine and feces, when in fact, up to 11% to 27% is absorbed into the body (FDA, 1999).

What effects will these accumulated chemicals have on our health? According to James Bowen, M.D:

“Any chlorocarbons not excreted intact from the body can cause immense damage to the processes of human metabolism and, eventually, our internal organs.”

At this relatively low-heat level, Splenda degrades into toxic compounds like chloropropanol and deadly dioxins. This evidence presents a sharp contrast to the claim that Splenda can safely be used in high-heat processes.

2. Increases risks of diabetes and obesity

Splenda is marketed as a way to “get a little sweetness in your life” without any of the concerns surrounding weight gain or sugar sensitivity. It’s becoming clear just how false this advertising really is. In fact, the trade-off may be far worse than the real thing.

Studies on human test subjects show that sucralose alters the body’s ability to process glucose, creating glucose intolerance, metabolic disturbances, and diabetes-promoting effects that are key factors in obesity. These harmful responses occur despite sucralose containing no calories and being classified as a ‘non-nutritive sweetener.’

This human study linked Splenda to diabetes-associated metabolic changes, including increased appetite and weight gain, calling into question its value as a sweetener for those suffering with, or wishing to prevent, blood sugar disorders.

If these sweeteners pass through the gut intact, and are mostly unabsorbed by the body, what could be responsible for these adverse impacts on gut function and insulin response?

It’s in the Microbiota

They observed significant changes to the gut bacterial composition of mice consuming artificial sweeteners, which brings us to the next reason to avoid Splenda: its effects on the all-important intestinal microbiome.

Research into the microbiome continues to yield breakthrough discoveries on the intimate relationship between the ‘enteric brain’ and the central nervous system. This connection may reveal previously unrecognized consequences of the use of this artificial sweetener. It’s negative impact on the microbiome is clear:

These findings coincide with a global uptick in inflammatory bowel disease, particularly evident in Canada, where Sucralose has been proposed to be a primary driver of this disturbing trend.

The use of sucralose has grown so prevalent, even our most vulnerable populations are incapable of opting out of exposure. A recent government-funded study found sucralose contaminated 65% of all breast milk samples assayed.

The groundbreaking study, “Nonnutritive Sweeteners in Breast Milk“, found that sucralose survives maternal metabolism and enters breast milk in the majority of samples tested. The presence of non-nutritive sweeteners in the breast milk was irrespective of whether the mother knowingly consumed the substance.

Adequate proof of the safety of sucralose in infants is not available, and tests are unethical to perform in human subjects. This is one reason for the use of animals in surrogate risk assessments. One such assessment involves testing a chemical’s safety by determining the amount needed to kill 50% of rodents within a short time frame (“acute toxicity”), and then deducing an “acceptable level of harm” to humans. This is done primarily by adjusting for body weight differences between rodents and humans.

This outdated and misleading standard does not account for low-dose, chronic exposures over time, nor does it account for the synergistic toxicities of multiple chemical exposures occurring simultaneously in real-world situations. Until such rigorous testing can be performed, the use of non-nutritive sweeteners should be halted by those wishing to conceive, and women who are pregnant or breastfeeding.

A study published in the European Journal of Nutrition is the first study of its kind to evaluate the effects of Splenda on thyroid function and metabolism.

Their findings reveal that sucralose is an endocrine disruptor: it disrupts the body’s hormonal systems. In this study, resultant effects included thyroid hormone suppression, increased appetite, and weight gain.

The researchers believed that Splenda’s adverse effects would be reflected in “thyroid histopathology,” i.e. increased instances of thyroid lesions and tumors. Could this be one of the drivers behind the mysterious global uptick in thyroid cancer diagnoses?

In this study, researchers lament the widespread use of non-nutritive sweeteners, particularly concerning due to lack of research on their effects on thyroid:

“Non-nutritive sweeteners are the most widely used food additives worldwide. However, their metabolic outcomes are still a matter of controversy and their effect on the thyroid activity, a key regulator of metabolism, has not been previously studied.”

The chief aim of this study was to reveal the effect of “sweet-type flavor on selected parameters of thyroid activity.”

105 rats were divided into 3 groups that could consume, free-choice, one of three different diets. The three, wheat starch-based diets had identical caloric content, yet differed in the following ways:

Because previous research has established that carbohydrates directly affect thyroid, this study was designed to isolate only the difference between the artificial and natural sweetener. Results indicated that both the presence and type of sweet-flavor carrier effects thyroid activity.

Compared to the diet with cane sugar which stimulates thyroid activity, sucralose diminished thyroid hormone activity. Additionally, key hormone concentrations (T4 & T3) were lower for subjects eating sucralose than in either the sugary or non-sweet diets. Researchers determined that sucralose significantly altered the thyroid and metabolic functions of the animals, with symptoms resembling those of hypothyroidism.

This study proved sucralose is not metabolically inert, the claim often made when questions of toxicity are raised. The results provide compelling evidence that the difference in thyroid and metabolic effects observed between the study groups were due to sucralose’s significant and complex toxicological properties.

Check out the research on the health benefits of natural sweeteners like honey, and stevia, a no-calorie alternative to synthetic sweeteners.