The history of the so-called Tisul princess has been exciting the imagination for several years, giving rise to more questions than answers. The story of the discovery of the Tisul princess is described in an article by Oleg Kulishkin, “The Lady Who Is 800 Million Years”, published in the Abakan newspaper Khakassia in 2002.

In the summer of 1969, an incredible and little-known discovery was made in the tiny village of Rzhavchik Tisulskago in the Kemerovo region of Russia.

During stripping work at the local coal mine, a miner named Karnaukhov came across an intricately crafted marble coffin approximately 70 meters below the surface of the Earth.

What was inside it has the potential to change human understanding of the history of this planet. 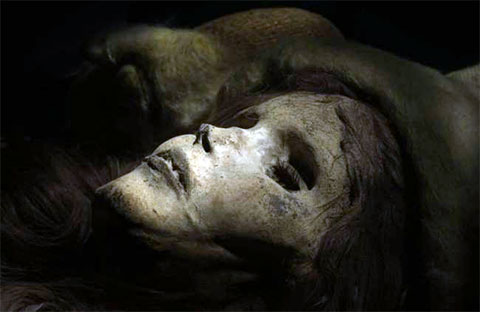 Could the discovery of an 800 million-year-old woman refute the theory of evolution?

The coffin was brought to the surface where the coal miners crowded around and attempted to open it by rapping on the edges.

The coffin was beginning to melt into the sun and eventually began to flow, putty-like, onto the ground and revealed what was inside. Initially, the miners spotted that the coffin was brimming with an unidentified pink and blue liquid.

Embalmed within the liquid was an incredibly beautiful woman of approximately thirty years old with large, blue eyes that remained eerily open. She was dressed in a sheer white dress cut to around her knee.

The men working at the mine noted that it appeared as though she wasn’t dead and was perhaps only sleeping. At the head of the coffin, the miners recovered a black, rectangular metal box.

News of the discovery quickly spread among the local village and then the authorities became involved. At approximately two in the afternoon, a helicopter landed at the site and declared that the area was in quarantine and that everybody who had witnessed what was inside the coffin would have to be temporarily isolated.

The coffin was too heavy to be carried in the helicopter, and so the officials decided to empty the liquid before transportation.

The coffin was then sealed, and a larger helicopter was called to take the coffin to another location. 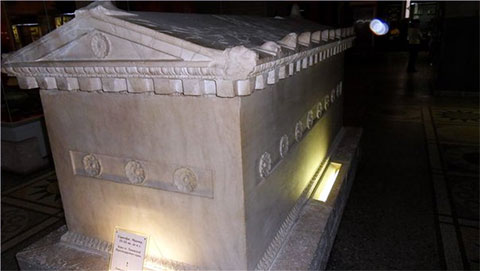 Five days after the discovery, a professor from Novosibirsk who had been tasked with investigating the body said that the find had the potential to turn human understanding upside down.

The professor said that he was certain that the body was at least 800 million years old and that the woman’s body was older than the coal that had formed around the coffin. He said that this meant that the Darwinian theory of evolution had to be called into question.

At first, an alien version was put forward, but a genetic analysis of the woman’s body showed her 100% uniformity with modern Russian people.

It was also established that the level of civilization to which the woman belonged is much higher than ours. In particular, the technique of producing the fabric of which the dress is made is not yet known to humanity.

It was not possible to determine the composition of the liquid, only some of its constituent components, formed by the oldest varieties of onions and garlic, were identified.

Immediately at the place of the discovery, strange things began to happen. One by one, all six “discoverers” of the coffin were killed i a car accident under unexplained circumstanced. The man who tasted the liquid, went crazy and froze on the threshold of his own house.

Gradually, the story was forgotten. Then again came to light in 2002.

Did the Princess of Tisul exist?

Firstly, it is worth saying that the Khakassia newspaper really exists. Until 1993, it was called “Soviet Khakassia.” The article, “A Lady of 800 Million Years”, was indeed published.

Secondly, in the 1960s, a coal mine was operating near the village of Rzhavchik. It is also true that the workers mentioned in the article worked in the mine.

But the actual coincidences end there.

The fact that the people mentioned in the article held completely different positions seems a trifle.

The age of the find of 800 million years is also not confirmed. There are no coal deposits of this age on earth. The most ancient deposits were formed in the Devonian period no earlier than 350 million years ago.

It is also doubtful that they were able to raise the sarcophagus from a depth of 70 meters from a coal seam, but it was not possible to load it into a helicopter due to too much weight.

The motivation of the worker who tried the liquid filling the sarcophagus is incomprehensible. In what brain capacity do you need to be in, in order to to taste the liquid from which a corpse of unknown origin floats? 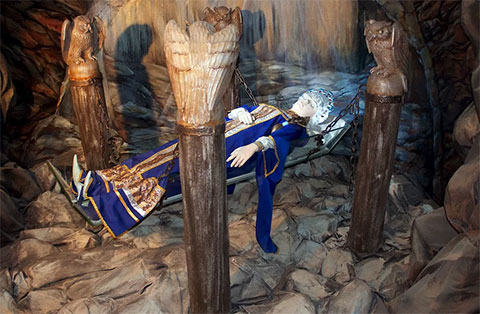 Further, if everything was so classified that even the entire coal mine was carefully dug up to destroy all traces of the find, why did the professor come and share secret information?

How did Novosibirsk scientists establish the age of the “deceased” in a matter of days? And most importantly, how could a genetic analysis of the body show its 100% uniformity with modern Russian people? Generally, this is a double discovery. Firstly, typically Russian national genes were discovered. Secondly, the Russians as it turns out, lived before the dinosaurs. So the ancienta, dug up the Black Sea and poured the Caucasus Mountains, nervously smoke on the sidelines. This surely deserves the Nobel Prize!

Finally, the author of the article writes that in 1973 “on the islands of Lake Berchikul, six kilometers from the place where the sarcophagus was found, large-scale excavations were carried out all summer until late autumn in the strictest secrecy, and the place of work was cordoned off by soldiers and police.”

True, they found only an ancient cemetery of the Stone Age. And not on the island, but on the shore, as there are no islands on Lake Big Berchikul.

However, in fact, in the summer of 1973, an archaeological expedition led by Vladimir Bobrov, organized by the Department of Archeology of Kemerovo State University, worked on the shore of Bolshoi Berchikul. But in Bobrov’s memoirs there is not a word about the sensational discovery thundered all over the country or about “archaeologists from the KGB”. And not because he was hiding something.

As some publications write, in the Tisulsky district they found not a corpse of a woman, but a biorobot, a kind of clone of the once truly living representative of powerful super-civilization. The robot was specially placed in the sarcophagus in order to transmit vast knowledge to future generations. And in the Siberian land a few more of the same capsules are hidden. But their time has not come yet: humanity is not yet ready for such knowledge.

If it turns out that the woman is not dead, but is in suspended animation, in this case, her awakening will be the main event of the 21st century. But the public is unlikely to find out about this. As a rule, such events are not advertized by the authorities …