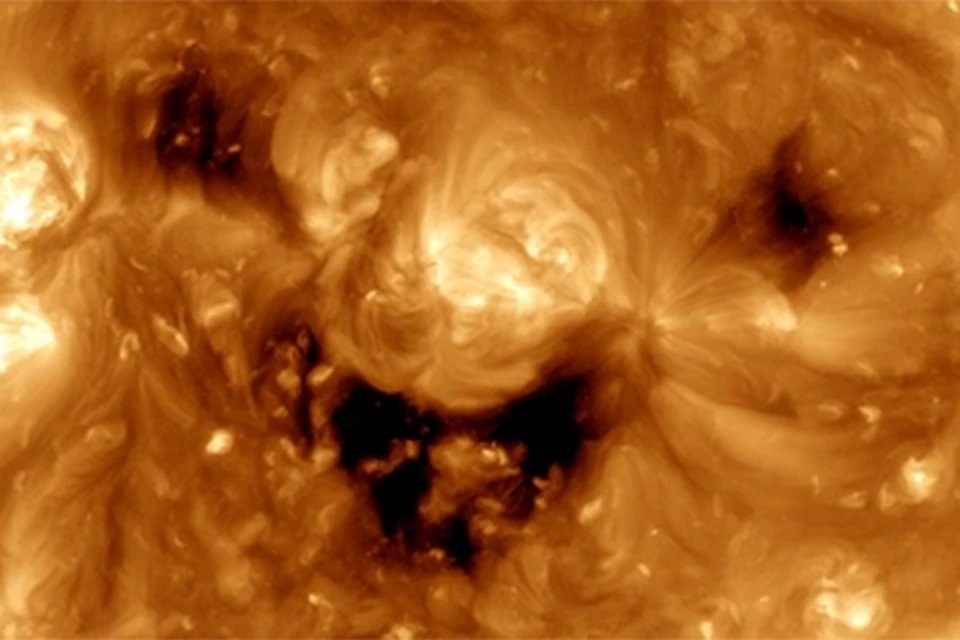 On October 31, 2018, the whole world watched with awe the asteroid 2015 TB145 passing by the Earth. The excitement of the public was due to the fact that the asteroid had a very strange orbit and flew past earth on October 31, that is, on Halloween. The diameter of the stone was nearly 600 meters and, in addition to everything, it was skull shaped.

The coincidence of the asteroid’s orbit with Halloween and its unusual shape worried many that fiery cosmic greetings from the galaxy would be conveyed to us humans in an ominous way. If an asteroid with a diameter of half a kilometer fell on our heads, Halloween would definitely turn out to be unforgettable.

And now, the next Halloween is approaching, everyone has forgotten about the skull asteroid, but, according to the NASA solar observatory, a special greeting can also come from another unexpected side – from the side of the Sun, the configuration of storms on which has now taken a very strange shape:

Users all over the world are trying to understand what this means, and devout astronomers are praying in fear of a Carrington event or even a micron, against which the geomagnetic storm of 1859 will seem like a children’s matinee.

At first glance, all this, of course, is some kind of coincidence, but in reality there are no coincidences in the Universe. It’s just that when people talk about coincidence, their horizons are limited and therefore they don’t see the system. And in this case, there is definitely some kind of system.

Or maybe the Sun itself has a consciousness, the level of which cannot be imagined. Perhaps even, there are some mystical processes and the Sun transmits a sign to countries and people, which the mystics should interpret.

Many clairvoyants consider the “smile” a sign – most likely a good one, despite the fact that the “mouth” gives the “sunny face” a slightly hysterical expression. As if the luminary does not smile at something, but laughs. But still, it’s more of a good thing. we would like to think.

By the way, the Sun had some “strange” moments in the not so distant past. For example, in 2014, also on the eve of Halloween, it emitted several flashes in such a way that it began to resemble a festive pumpkin. And in February 2015, the shone was somewhat saddened. Then the “mouth” appeared as a plasma thread, stretching for almost 900 thousand kilometers. When curved, it gave the “face” a sad expression.

Those past years signs did not bring anything fateful yet- on a global scale. But 2022 is not a trivial year and In general, October 31 will somehow show. We will be pleased if nothing bad happens