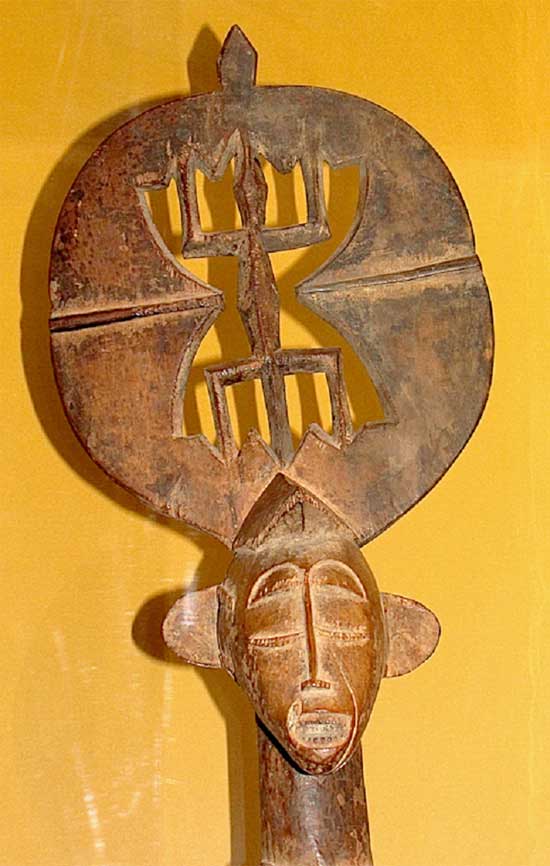 A common theme in creation myths is that the first human being appeared in the sky, often as a metamorphosis of a divine creator.

On Tahiti, people remembered the time before creation when “an expanse of water … covered the abyss, and the god Tino-ta’ata … floating on the surface.” The god’s name was stated to mean “Human Form”. The Yuki (Mendocino County, California) told a similar myth concerning the first appearance of their creator and civiliser:

“There was only water, and over it a fog. On the water was foam. The foam moved round and round continually, and from it came a voice. After a time there issued from the foam a person in human form. He had wing-feathers of the eagle on his head. This was Taikó-mol [‘solitude walker’]. … He stood on the foam, which still revolved. There was no light.”

On Pentecost Island (Vanuatu, Melanesia), it is said that, long ago, the god “Tagaro came down from heaven”, adopting “a human form, with superhuman power” and acting as a creator, who “made men and other things”. And the Kamilaroi (New South Wales, Australia) envisioned the supreme god, Baiame, “as of an incomprehensible greatness in appearance”, physically indistinguishable from his “throne of transparent crystal of vast magnitude, which has its base in the great water, and rises to a stupendous height towards the stars”: “In their notion of God’s appearance he is great beyond conception, beautiful to look upon, and immovably fixed in this crystal rock, with only the upper half of a supernatural human body visible.”

Some traditions specify that this anthropomorph apparition served as a sun, before the current sun had commenced to ply the ecliptic path. Thus, a tribe of the Wiradjuri from the headwaters of the Murrumbidgee River (central New South Wales, Australia) recounted that summers were milder when a human ancestor served as a permanent sun:

“It was not always so. The aborigines have a legend … which tells of a time when the earth was not parched by such a sun; when it was ever day, but the daylight was the radiance of a human ancestor, and when the trees and shrubs and flowers were as bright and plentiful as they are now in the regions that are not wilted by our sun. The sun, they say, is an ancestor – a human – that was not understood …”

Just so, the Quiché Maya remembered the excessive heat of the sun when it had risen in the east for the first time and possessed a human countenance:

Pursuing this theme further, in many cultures the enigmatic ‘sun man’ manifested as an expression of the luminous axis mundi or ‘world axis’, often doubling as a cosmic mountain or tree. For the ancient Egyptians, Shu, who lifted up the sky with his two arms, was “a god of light, or light personified”. As the Coffin Texts have it:

“I am this soul of Shu which is in the flame of the fiery blast which Atum kindled with his own hand. … I am the soul of Shu, for whom Nūt was placed above and Gēb under his feet, and I am between them. … I am Shu whom Atum fashioned, and this garment of mine is the air of life. … It is I who make the sky light after darkness, my pleasant colour is (due to) the air which goes forth after me from the mouth of Atum …”

Judaeo-Christian Gnostics portrayed the first ancestor, Adam, as a giant man standing in the centre of the earth, who was endowed with a “glorious appearance”, “the image of his face burning with glorious splendor like the orb of the sun, and the light of his eyes was like the light of the sun, and the image of his body was like unto the sparkling of crystal.”Indian philosophers similarly equated the fig tree Aśvattha, whose light was “the yonder sun”, with the prototypical man Brahman or Puruṣa (‘person’):

On Kiribati (Micronesia), “the beam of wood that had lifted the sky” was styled “the First Tree, the Ancestor Sun”. And the Desana (Brazilian Amazonia) submitted that “the creative Sun holds and carries the cosmos, of which it is the center or axis, as the spine holds and carries the body … It is the ‘sun axis’ that holds together the upper, middle, and lower worlds …”

The notion of a transient blazing humanoid in the sky was fated to remain utterly bizarre until a decade ago, when plasma physicist Anthony Peratt reported on high-energy density plasma instabilities that transform an initially cylindrical plasma beam via a stack of toroids into a so-called ‘squatting man’, emitting extremely dazzling synchrotron radiation light. Recognising this modern-day homunculus in countless petroglyphs, Peratt was man enough to go public with the idea that such ‘stickmen’ had graced prehistoric skies in the form of intense aurorae. Mythical data such as presented above, of which Peratt was unaware, bolster this hypothesis, especially insofar as the preternatural ‘man’ materialises as a form of the axis mundi. In other traditions, the creator dispatches a paradigmatic man to the earth shortly before departing; drawing a curtain over the ‘golden age’, the teachings of the ideal man usher in the age of ‘history’. Peratt’s simulations converge to the extent that the ‘squatting man’ emerges towards the end of the plasma sequence, just before the pinch collapses.

So far, the literature on the experimental formation of a ‘plasma man’ appears to be limited to Peratt’s enunciations. Hopefully this work will be given hands and feet by fellow plasma physicists with access to the requisite resources and an attitude that is neither spineless nor lacklustre.

In this article:Cosmology, Global Mythology, Sun