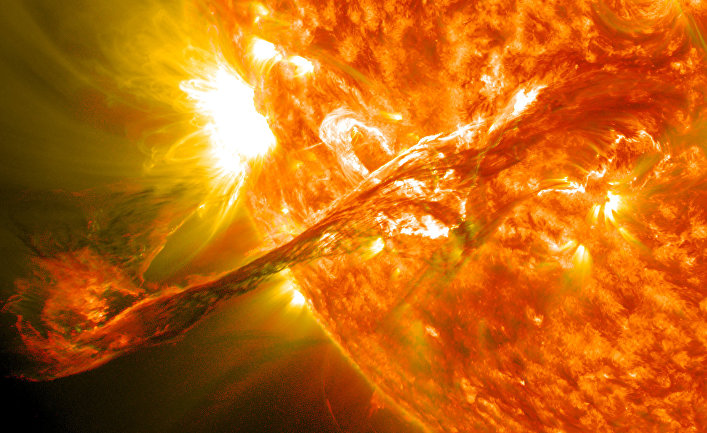 A Serbian scientist saw a correlation between weak ultraviolet radiation and the emergence of large-scale epidemics of infectious diseases. Images from American satellites confirm that the ultraviolet radiation of the sun or the disinfection of the atmosphere at the time when COVID-19 appeared was even weaker than during the period of H1N1 propagation.

Let’s recall the 2009 H1N1 flu pandemic. It spread, despite all the efforts of the World Health Organization. Of course, nothing could be done with this epidemic, since it erupted during the period of the weakest solar radiation. After all, just as after surgery, the surgical room is sterilized with ultraviolet lamps, the atmosphere of the earth naturally sterilizes ultraviolet solar radiation.

​​“On March 11, the outbreak of AP 2758 on the Sun caused an increase in ultraviolet radiation. In the geoeffective position, one x-ray emission was recorded, which became the first after more than 300 days of inactivity of the Sun.”

When a flash on the Sun occurs on a side not visible from Earth, the level of ultraviolet radiation decreases. Its next growth is expected in early April 2020, and entry into a geoeffective position is expected on April 7, when the radiation will be sent directly to the Earth.

An increase in temperature does not play any role in the disinfection of the atmosphere, so flu can appear even when the daytime temperature is high.

It is expected that weak X-ray radiation will reach a maximum on April 7, when the AP 2758 volcano appears on the visible side of the Sun, which disinfects the atmosphere more. No matter how weak the effect of x-rays, it plays a large role in the total radiation of the sun.

For the disinfection of the atmosphere, the angle of incidence of ultraviolet and x-ray radiation plays a large role, since the level of radiation per unit area during the day depends on it.

It must be said that the transition period between the 24th and 25th cycles of solar activity is exceptionally long. The activity of the Sun reached an extraordinary minimum. The level of activity of the Sun in 2019 – 2020 is the lowest since 1810. Temperature has no effect on COVID-19.

If NASA’s forecast comes true, then in ten years we should expect another mutation of the virus.