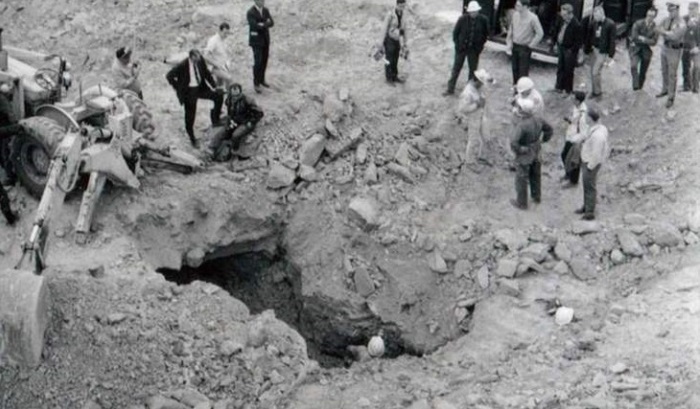 In the US state of Missouri, one of the local attractions is a vast network of caves that have thousands of passages, both above and below ground.

Because of these caves, Missouri is often referred to as the “state of the caves,” and it is not surprising that they attract many explorers as well as adventurers.

Most of these caves were well explored in the first half of the twentieth century. But because of the intensive construction of Highway 79 in the 1960s, employees sometimes encounter new gaps that lead to unexplored parts of local caves.

One of these caves is called the Murphy’s Cave. The openings leading to its tunnels were located very close to the houses of the city of Hannibal, one hundred miles northwest of St. Louis.

This city is known as the birthplace of Mark Twain and in particular the Mark Twain Cave where Tom Sawyer films were made. Excursions to this cave are still being made.

In the 1960s, parents strictly forbade their children from even looking at the openings in the ground. They feared crashes and other disasters. But who could stop the curious children?

The three Hannibal boys were particularly curious about the caves. They were 10-year-old Billy Hoag, his brother 13-year-old Joel Hoag and their friend 14-year-old Craig Dowell.

They regularly picked up lanterns and went down into the dark cave tunnels. Their parents forbade them to go there, but in response the boys said they would play in the yard and actually went to the caves.

On May 9, 1967, the three children headed to Murphy’s Cave. They were waiting for the moment when the construction workers at the site would go to rest. The parents found out when they saw the characteristic reddish dirt on their clothes. There was a serious rebuke.

However, on May 10, the three went to the same cave again, using the moment Houg’s parents were in the store to shop.

The boys prepared thoroughly. They took shovels, lanterns and other necessary things. At 3pm, they were spotted by a casual passer-by walking to the entrance of Murphy’s Cave. He noticed that the boys were dragging a makeshift ladder of boards to lower themselves through the opening inside the cave.

This was the last time these children were seen alive. After that, they disappear and even traces of them, much less their bodies, were found.

When the parents of the Hoag brothers returned from the store and saw that their children had disappeared, they became very angry and intended to give them a good lesson. But when the children did not return home during the time that they would usually go back from their games, their parents were worried. They began to pray that nothing bad would happen to the boys.

When it was dark, the Hoags went to their neighbors and someone told them that they had seen the Hoag brothers and young Dole near the Murphy Cave. City officials have been notified of the disappearance of the three children, who may have been lost in the cave.

The next morning, police, national guards and volunteers organized a mass search for the boys. At one point, FBI experts got involved in the process.

Hundreds of people explored the tunnels of all nearby caves, not just Murphy’s Cave. All suspicious passageways, narrow cracks and still unexplored tunnels were carefully checked.

But everything was in vain. They did not even find traces of the children. The tunnels of Murphy’s Cave are very complex and winding. They were all well researched.

Then, searchers began looking around the surrounding forests, abandoned houses and old mines. They even summoned a few psychics who claimed they could “feel” the place where the children had disappeared. But, again without result…

This large-scale search of the missing went on for 10 consecutive days and was among the most popular searches in Missouri’s history. As a result, only one probable trace of the boys was found – a baby sock lying near the entrance to the cave.

The sock wasn’t dirty, so it obviously hadn’t been in that place for a long time. The search crew clung to it as a probable evidence. However, none of the parents of the missing children was able to confirm whether the sock belonged to one of the Hoag brothers or Dowell.

There were some false footprints. At one point, near a cave, they found a dried puddle of brown liquid similar to blood, but during the investigation it turned out that the puddle was from a spilled bottle of fertilizer.

Another such clue is that someone apparently saw the boys out of town alive after the search began, but no children or traces of them were found at that location.

There was also a strange message about a man in a black cloak who was not recognized as a city resident, police officer or anyone else. He was spotted in many places where children were being searched. It was as if he was trying to hide and secretly monitor the work of the search groups.

According to one of the first versions, the children were buried alive when one of the cave tunnels collapsed, but as mentioned above, all possible tunnels of the nearest caves were checked by search crew and they did not find any traces of fresh collapses there.

According to another version, the boys may have accidentally entered a completely new tunneling system that other researchers have not noticed. And nowadays, near Hannibal, sometimes new tunnels are found in the local caves, which are caused by expansion, rainfall and other reasons. All new tunnels have been carefully inspected.

Volunteers are still trying to find the remains of the missing boys or at least their belongings. But, so far, they haven’t found anything …

Other theories say that the children fled to another city or were abducted.

The memory of this strange disappearance of these three boys is still commented on in Hannibal. A memorial plaque with the boys’ names and their history is placed next to the ill-fated entrance to Murphy’s Cave, which is now closed.

Advertisement. Scroll to continue reading.
In this article:city of Hannibal, Mark Twain Cave