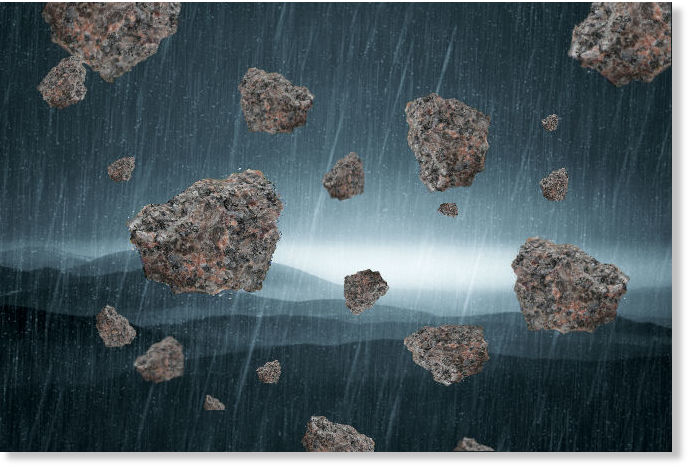 Throughout history, there have been numerous recorded instances of strange objects falling from the sky – fish, frogs, candy, jellyfish, beans, nuts, seeds, and all manner of bizarre and unlikely objects. A popular theory explains these events as being caused by strong winds that whisk things up from the ground or water and hurl them towards an unsuspecting town many miles away. But can this theory also explain showers of heavy stones that have been known to damage houses and even kill people and livestock?

A Long History of Raining Objects

One of the first recorded instances of “raining” objects comes from the writings of Roman philosopher and naturalist Pliny the Elder, who documented storms of frogs and fish in the 1st century A.D. in what is now Italy.

In the 3rd century A.D., ancient Greek rhetorician and grammarian Athenaeus wrote in his work The Deipnosophists (Book VIII): “In Paeonia and Dardania it has, they say, before now rained frogs; and so great has been the number of these frogs that the houses and the roads have been full of them; and at first, for some days, the inhabitants, endeavoring to kill them, and shutting up their houses, endured the pest; but when they did no good, but found that all their vessels were filled with them, and the frogs were found to be boiled up and roasted with everything they ate, and when besides all this, they could not make use of any water, nor put their feet on the ground for the heaps of frogs that were everywhere, and were annoyed also by the smell of those that died, they fled the country.” Since then, numerous other unusual instances have been documented, including a storm in Italy in 1840 that deposited thousands of partially germinated Judas Tree seeds native to Central Africa; a dusting of sugar crystals in 1857 in Lake County, Calif.; a rain of hazelnuts over Dublin, Ireland, in 1867; live pond mussels in Paderborn, Germany, in 1892; and jellyfish in Bath, England, in 1894.

Perhaps one of the most exciting “rains” to occur was the shower of 16th-century coins that fell from the sky on June 16, 1940, in the Russian village of Meschera. Archaeologists hypothesized that a strong wind swept up a buried trove that had been exposed by soil erosion, before dropping it back down.

One of the first scientists to address the strange phenomena of raining objects was E.W. Gudger, an ichthyologist at the American Museum of Natural History. Gudger published a paper in the journal Natural History, titled “Rains of Fishes,” in the early 20th century in which he suggested four possible explanations for showers of marine species.

First, he suggested that certain “out-of-place” animal species may simply be on their migration. Secondly, that fish or other marine species were left stranded on land after overflow from ponds or streams. Third, that estivating fish, awakened by heavy rains, had burrowed to the surface. And fourth, that the fish had been whisked out of the ocean or lake by waterspouts or tornadoes and dumped to the ground many miles away. The latter theory has received the most support. Jerry Dennis writes in his book It’s Raining Frogs and Fishes: Four Seasons of Natural Phenomena and Oddities of the Sky, that theoretical calculations suggest that “golf ball-sized hail requires an updraft of more than 100 miles per hour, which would be more than powerful enough to loft small fish high into a thundercloud.”

However, some occurrences of falling objects cannot as easily be explained by this theory. The phenomena of raining stones, for example, has been known to last for several days or even weeks, and with rocks too large to be carried long distances in the wind.
Raining StonesLike the phenomena of raining animals, raining stones have been documented throughout history. One of the earliest accounts is from 1557, when Conrad Lycosthenes’s Chronicles of Prodigies, described a rain of stones bringing death to people and livestock.

During the Middle Ages, occurrences of stones falling from the sky were attributed to creatures of supernatural origin or even the devil. In 1690, folklorist Robert Kirk wrote in his book The Secret Commonwealth that falling stones were caused by subterranean inhabitants called “invisible wights” – similar to goblins or brownies – which would hurl the stones around, but never with the intention to hurt anyone. In 1698, stones fell from the sky in New Hampshire, which was recorded in a pamphlet titled Lithobolia, or the Stone-Throwing Devil.

An illustration of a rain of stones from “Don Quixote.”

One of the most well-known cases of falling stones occurred in Harrisonville, Ohio, in Oct. 1901. The Buffalo Express, a small local newspaper, reported that on Oct. 13, “a small boulder came crashing through the window of Zach Dye’s house.” Nobody was seen in the vicinity. But this was just the beginning. Within a few days, the whole town was supposedly afflicted by stones and boulders falling from a clear sky. Perplexed as to where the stones were coming from, the townspeople rounded up all the men and boys of Harrisonville to rule out the phenomenon being caused by a gang of trouble-makers (it was assumed that females would not be capable of such as act). The stones continue to fall. Several days later, the rain of stones stopped just as suddenly as it had started.

Scientists have admitted that they really do not have a definitive answer for the strange phenomena of raining stones. Over the years, many theories have been proposed from poltergeist activity to supernatural beings, gangs of stone-throwers, volcanoes, meteorites, tornadoes, and even divine retribution, as seen in the reference (Joshua 10:11): “the Lord cast down great stones from heaven upon them until Azekah, and they died.”

On Nov. 23, 2013, thousands of small rocks fell from the sky over Sicily, Italy, which began after Mount Etna, an active volcano, spewed out pumice stones, dust, and ash into the sky. Cars became covered in small, sharp, black rocks. This certainly explains one instance of falling stones. However, many recorded events do not match this description.

Another popular explanation is tornadoes or tornado-like conditions. However, rocks have been reported to fall even in fine weather and in countries that do not experience tornadoes. Furthermore, tornadoes are only capable of scooping up debris and shooting it outwards on ballistic trajectories. They do not cause debris to fall downwards from the sky far from the point of origin.

Some experts have argued that raining stones may be caused by a meteorite entering Earth’s atmosphere and fragmenting into thousands of smaller stones. However, such an event is usually accompanied by a sonic boom, which has not been documented in any of the reported cases, and this theory would have a hard time accounting for events that have lasted days or even weeks.

As with many unusual and unexplained phenomena, scientists and academics have been reluctant to examine the subject in any rigorous manner. Presumably, examining the nature of the rocks and whether they are local to the area in which they fall or from further afield, including from outerspace, could help to at least shed some light on mystery. Until then, we are left with mere speculations as to what causes this bizarre phenomena.

April Holloway is an editor and writer with Ancient-Origins. She completed a Bachelor of Science degree and currently works as a researcher.

Visit the Epoch Times Beyond Science page on Facebook, and subscribe to the Beyond Science newsletter to continue exploring the new frontiers of science! 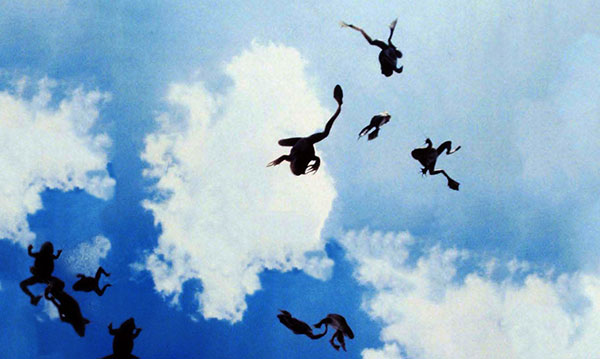 By Benjamin Radford, Live Science Contributor For millennia, people have reported a rare and strange phenomenon: a sudden rain of frogs — or fish...