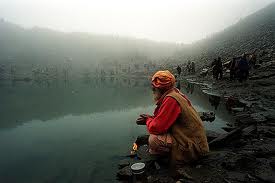 A lake with hundreds of ancient skeletons surrounding it. The surprise is what killed them…

In 1942 a British forest guard in Roopkund, India made an alarming discovery. Some 16,000 feet above sea level, at the bottom of a small valley, was a frozen lake absolutely full of skeletons. That summer, the ice melting revealed even more skeletal remains, floating in the water and lying haphazardly around the lake’s edges. Something horrible had happened here.

The immediate assumption (it being war time) was that these were the remains of Japanese soldiers who had died of exposure while sneaking through India. The British government, terrified of a Japanese land invasion, sent a team of investigators to determine if this was true. However upon examination they realized these bones were not from Japanese soldiers—they weren’t fresh enough.

It was evident that the bones were quite old indeed. Flesh, hair, and the bones themselves had been preserved by the dry, cold air, but no one could properly determine exactly when they were from. More than that, they had no idea what had killed over 200 people in this small valley. Many theories were put forth including an epidemic, landslide, and ritual suicide. For decades, no one was able to shed light on the mystery of Skeleton Lake.

However, a 2004 expedition to the site seems to have finally revealed the mystery of what caused those people’s deaths. The answer was stranger than anyone had guessed.

As it turns out, all the bodies date to around 850 AD. DNA evidence indicates that there were two distinct groups of people, one a family or tribe of closely related individuals, and a second smaller, shorter group of locals, likely hired as porters and guides. Rings, spears, leather shoes, and bamboo staves were found, leading experts to believe that the group was comprised of pilgrims heading through the valley with the help of the locals.

All the bodies had died in a similar way, from blows to the head. However, the short deep cracks in the skulls appeared to be the result not of weapons, but rather of something rounded. The bodies also only had wounds on their heads, and shoulders as if the blows had all come from directly above. What had killed them all, porter and pilgrim alike?

Among Himalayan women there is an ancient and traditional folk song. The lyrics describe a goddess so enraged at outsiders who defiled her mountain sanctuary that she rained death upon them by flinging hailstones “hard as iron.” After much research and consideration, the 2004 expedition came to the same conclusion. All 200 people died from a sudden and severe hailstorm.

Trapped in the valley with nowhere to hide or seek shelter, the “hard as iron” cricket ball-sized [about 23 centimeter/9 inches diameter] hailstones came by the thousands, resulting in the travelers’ bizarre sudden death. The remains lay in the lake for 1,200 years until their discovery.