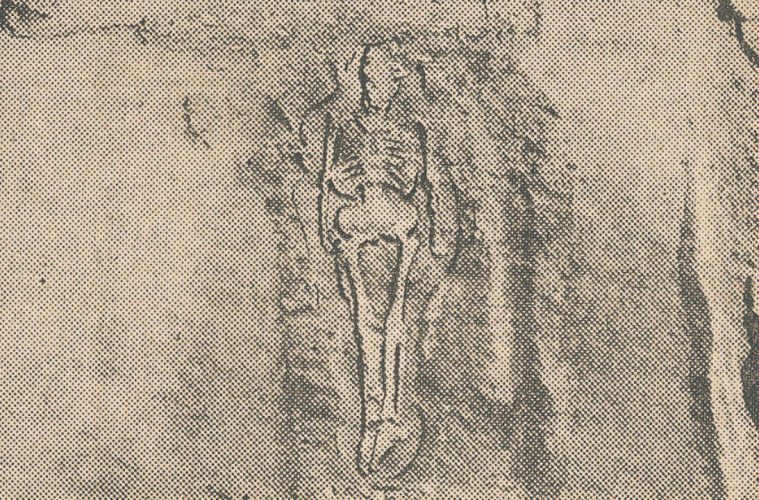 Researcher Graham Hancock coined the phrase, ‘we’re like a species with amnesia,’ and it’s true. Despite the fact that it seems the story of human history is well uncovered, every single year there are new discoveries made that challenge what we once held to be true. In some cases, there are discoveries which are concealed from the general public for various reasons, a great example of that would be the black budget world. There also seems to be amazing discoveries that are completely ignored by mainstream media and most of these discoveries would shake the foundations of human history. Another great example are the bodies recently discovered in Nazca, Peru – three-fingered/towed humanoid beings whose physical anatomy is far different from that of a human. Another example would be the stories regarding intelligent ancient civilizations, like Atlantis, for example, which many scholars now believe to have actually existed.

Out of all the information that’s out there regarding intelligent ancient civilizations, and more, even if just one of these stories are true, it would completely change what we thought we knew about human history and the history of our planet. I believe the story of our past might be different from what seems to be the only two available options, creationism and evolution. There may be a myriad of other factors involved.

These discoveries would also shake the foundations of many people’s belief systems. The human race has been kept from so much information, and forced into a specific worldview that’s designed to benefit the ‘1 percent.’

In today’s day and age, it’s always best to keep an open mind, especially when new information is constantly emerging (for those who are curious enough to actually look) which challenges the old.

Did giants once roam the Earth? It’s been in the literature and lore of multiple cultures throughout human history, from the Maya, the global indigenous populations, the Bible and more since what we perceive as the beginning of time. For example, the Bible tells us that when the Gods were on Earth, they were giants.

“This, when you bring up in conversation, normally brings up, you know, laughter and people giggling and thinking your joking, and yet, the Bible is full of references of giants in our history.” – Michael Tellinger

Tellinger is referring to the Nephilim, as referenced in Numbers 13:33 of the Bible: “We saw the Nephilim there (the defendants of Anak come from the Nephilim). We seemed like grasshoppers in our own eyes, and we looked the same to them.”

Again, it’s not just the bible, it’s lore from cultures that pre-dated religion as well as the indigenous. 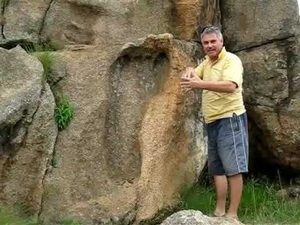 Is this the actual footprint of a giant?

Tellinger is a renowned author/politician who has made several groundbreaking discoveries regarding lost ancient civilizations that once roamed the Earth. Here’s an article about him, with a picture of him standing next to a giant footprint, almost the size of a full human being.

There are several examples of physical evidence which exists to support the idea that giants once roamed the Earth. For example, stored in the vaults of the medical school at WITS University, Johannesburg, there is part of an upper leg bone with a hip-joint that would have stood approximately 12 feet tall. It’s been there since the early 1960’s, and was found by miners in Northern Namibia. It is one of the most precious and rare specimens available today that clearly indicate the existence of giants in Southern Africa more than 40,000 years ago.

You can view footage of that here.

Apparently, in 1883 the Smithsonian, a United States government/military led organization at the time, sent a team of archaeologists to South Charleston Mound. According to the official report, the team discovered a number of giant skeletons ranging from 7 to 9 feet tall. Some of them had a “compressed or flat-head type” which would resemble similar skeletal characteristics to those found in Egypt and South America (source).

Whether or not this is ‘fake news’ is highly debatable, as there is a lot of evidence to suggest it’s not.

The list goes on and on, and what’s interesting is an article published in the New York Times in 1902 that also deals with the subject. 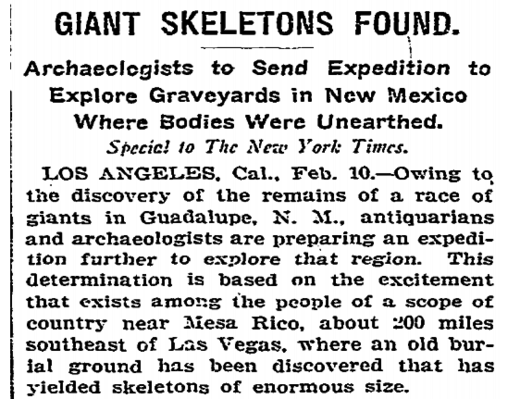 The article goes on to describe two stones with “curious inscriptions” and underneath were the bones of a body that “could not have been less than 12 feet in length.” According to the NY Times article, “the men who opened the grave say that the forearm was 4 feet long and that in a well-preserved jaw the lower teeth ranged from the size of a hickory nut to that of the largest walnut in size .”

Apparently the chest of the body had a circumference of 7 feet.

The bodies were first discovered by Luciana Quintana, it was on his ranch these specific bodies were found, according to the article, “Quintana, who has uncovered many other burial places, expresses the opinion that perhaps thousands of skeletons of a race of giants long extinct will be found. This supposition is based on the traditions handed down from the early Spanish invasion that have detailed knowledge of the existence of a race of giants that inhabited the plains of what now is Eastern New Mexico. Indian legends and carvings also in the same section indicate the existence of such a race.”

Here’s another New York Times article about skeletons that were discovered in 1885.

Going back further still, in 1774 settlers found what they called “The Giant Town,” which housed several gigantic skeletons, one being an eight foot tall male. (source)

“In addition to the human skeletons found in NY State, there is also the famous case of ‘The Cardiff Giant,’ a white alabaster-like statue of an 11-foot man who showed an exposed penis and hieroglyphic inscriptions. This statue caused a worldwide sensation and was exhibited in New York City to thousands of paying customers before it was declared a fake by the NY newspapers, despite the fact that scholars from Harvard and elsewhere insisted that the statue was genuine.”

Dewhurst is an Emmy Award – winning writer. He’s a graduate of NYU with degrees in journalism, film, and television, he has written and edited for the History Channel, the Arts & Entertainment Channel, PBS, Fox Television and Fox Films, ABC News, TNT, Paramount Pictures, and the Miami Herald. He himself, is well research and you can read his article on the topic here: “The Ancient Giants Who Ruled America”

The Story of Human History

As mentioned earlier, we don’t really know the full story of human history, and when new evidence and information pops up, either from the past or today, which challenges the current accepted framework, it seems like people lose their minds. What we have today, in large part, is dogma, instead of actual fact. With all of the discoveries being made, and all the discoveries that have been made which mainstream media completely ignores, we are clearly not being told something about the true origins of humanity. The idea that a powerful group of people protecting their interests by suppressing information in multiple fields is unsettling. For a plant and its people to thrive, it must live in complete transparency.