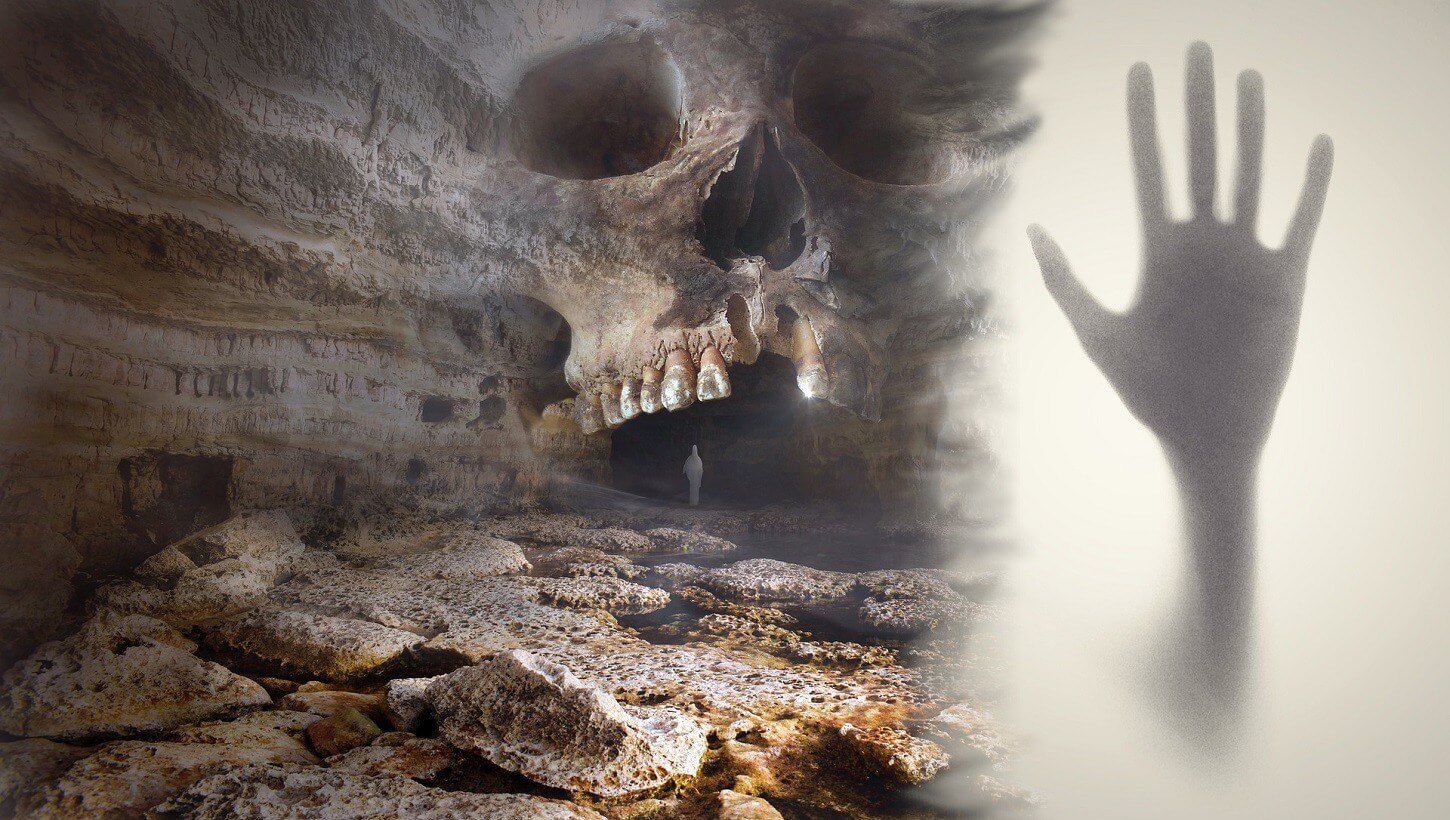 Recently, we have ventured, on several occasions, to the idea of ​​the many mysterious cave systems around the world that house entities or ways of life that most of us would not want to contemplate, let alone meet face to face. One of those locations that may be more mysterious than most is “Hollow Cave,” which is part of Kentucky’s equally mysterious cave systems. And more specifically the “shadow thieves” that some claim reside deep within them.

The strange activity in this place goes back to the beginning of the XVIII century, before the official formation of the United States of America. And what’s more, it seems that this strange activity continues today to a large extent. Furthermore, Kentucky’s cave systems, including the Mammoth Cave National Park, are the largest cave systems in the world. And it seems that much of the underground terrain has not yet been discovered. In fact, according to some, parts of these ancient cave systems have been purposely closed and remain undeclared. And according to one researcher, whose accounts we will examine in a moment, the secret that surrounds the parts of these cave systems is not for the protection of the cave. But purely for the protection of those who dare to enter.

While there is no doubt that many of the legends surrounding the Kentucky caves have their roots in the witchcraft accounts of the early 1700s, the fact that they last so long three centuries later may mean that we should lend more attention to such events. In fact, perhaps such tales as shadow hunters may become more than mere folklore. And, in addition, maybe we should look at some of the other cave systems around the world under a new perspective and from a different perspective, so that they do not become the same.

The account of Shadowhunters of the hollow cave. Enter the public arena through the researcher and writer, Allen Kopp. And in addition, the incident is one that involves Kopp himself. Before disclosing the details of your account, you cryptically state that the location of the cave in question must remain “a strict secret for reasons I can not tell you about.” Then he goes on to say that this is for the protection of the reader.

What we do know is that the cave is located somewhere in an abandoned quarry, behind a retirement home in Louisville, Kentucky. According to Kopp, the cave would extend for at least a mile, reaching the Cave Hill cemetery. In one stage, there was apparently an entrance to Hollow Cave at the location of the cemetery. Through this entrance, “spring waters” flowed to the nearby lake. A boat is required to reach this entrance (which is now hidden). According to the legends of the area, this lake had about 25 acres and a depth of about twenty feet.

In addition, due to the “quarry blasting”, the terrain towards and in the cave is, at best, “treacherous”. In addition, rocks and quicksand litter the corridors. However, that is not all that resides in cave systems. It is not even the worst. The shadows, which appear without the presence of light, no less, are “what dwells” in the hollow cave. And beyond, according to Kopp, “they are everywhere, but without light, nobody can see them.”

Perhaps even more alarming, these shadows are far from latent. And they are waiting for the opportunity to be complete once more. At the expense of the unfortunate adventurer who dares to enter.

Without a shadow, a person can not exist!

Apparently, the origins of these mysterious shadows of Hollow Cave date back to the early eighteenth century. During this time, when the United States of America was still in the future and the “new world” was still in the process of “settlement” by pilgrims from Europe, witchcraft was particularly widespread. And although the Inquisition had no authority in the new world, many women would find their end among the accusations of witchcraft. While the vast majority of these women were undoubtedly innocent and none deserved the treatment they received in the last moments of their lives, there are some curious and suspicious cases. It would seem that it was not only free enlightened thinkers who wished to practice the finer details of their art and beliefs.

What’s more, it’s not just individual witches who make poultices and potions in the middle of nowhere and far from the majority of the population. Entire witches’ wives existed along the many forests and back roads of the rapidly growing nation that would be the United States.

In the area that would become Louisville, Kentucky at the beginning of the 18th century, in the place where the only entrance to the cave was in the cemetery, a group of witches would meet at night to perform “rituals”. According to area reports, around this time, at least two girls would disappear near the same place. None of them was seen again. In addition, according to reports and legends of the area, a “Countess” of the coven, called “Mary Smith”, which is unlikely to be her real name, would put a curse on many young victims. Including the two young people. She would steal their shadows, a curse from the Black Book of Curses of the “old country.” Without a shadow, a person can not exist.

“They walk among us every day and we do not pay attention to them!”

Kopp himself would investigate these strange legends. In fact, it was this interest and this research that led him to Hollow Cave in the first place. And it is in these black and deep cave systems that the shadows of the unfortunate victims of Mary Smith’s coven resides. At least according to Kopp. And here lies the complexity of such legends.

As Kopp explains, “In the darkness you can not see the hidden shadows. And turning on a light of any kind will not help. As soon as the light emits in a shadow, it ceases to be a shadow. ” And besides, you can not see them anymore. Just like you can not see in the dark. What may happen to our “mortal remains” remains a mystery. As Kopp asks, “did we ever really exist?”

Besides that, Kopp insists that we have all seen these shadow hunters. Responsible for once turning human beings of “flesh and bone” into memories without form and without shadows. According to Kopp, “they walk among us every day and we do not pay attention to them”. In addition, on many occasions, we might even find ourselves talking with such creatures, although again we would not be aware of anything out of the ordinary or out of the ordinary. However, despite this, we must be careful with whom we become friends with. According to the legends, if an unfortunate person befriends such an entity, he is likely to lose his shadow. And ultimately his soul.

These entities that steal the shadows are the true witches of the legends. Some that can alter their appearance depending on their objective. Instead of the repulsive and pointed-nosed “witches” of fairy tales, these creatures, for example, by attracting a young man, project themselves as a beautiful young woman. So beautiful that most men could not resist its charm. Or his seductive and fatal attack.

A perpetual state of nothingness, watching and waiting!

Once these mortal entities have their soul, they also have the shadow of a person. These shadows are “hidden” and reside in the darkness of the hollow cave.

Without a doubt it is an interesting concept. Without light, there can be no shadows. As Kopp himself asked, “do we really ever exist”? Are we not more than shadows and projections? Could this explain the obsession in multiple ancient texts of “light” and how important it is? Could it be esoteric information and wisdom about the true nature, state and existence of humanity?

Perhaps what is most chilling, certainly for those who wish to explore such cave systems is that these “Shad-O-Cavo” caves are present throughout the United States, and even in the world. And what is more, they are full of the shadows of those who have disappeared. These shadows, in their perpetual state of non-existence, await, seeking an opportunity to exist once more. As much as we can not see these shadows, they can not see us either. However, they can “feel” a living presence.

As extravagant and truly strange as this notion is to many, perhaps it would be linked to the absolute plethora of “missing persons” in this part of the world. In fact, there is a wave of theories about where the missing people are. And who or what is behind his disappearance. Maybe some are victims of shadow hunters?

Watch the video below.

In this article:cave systems, Hollow Cave