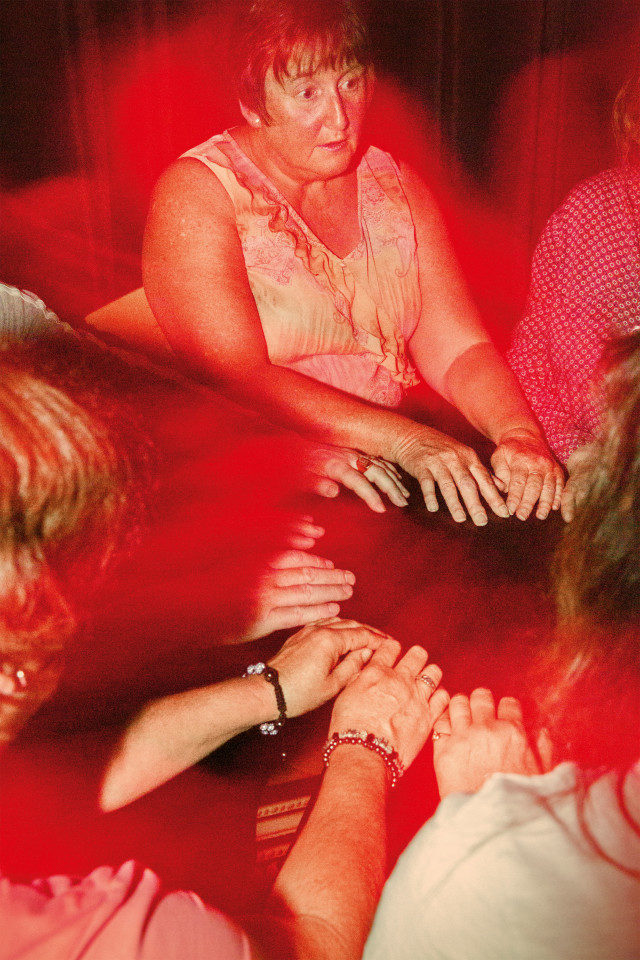 Medium Annette Rodgers leads a séance, allegedly with the help of her deceased daughter, Lauren.

Shannon Taggart was never a big believer in ghosts. But that changed in 2001, during one of her first visits to Lily Dale — a hamlet in southwestern New York state that’s home to the world’s largest spiritualist community.

The Brooklyn photojournalist was taken by surprise while watching a private reading with Gretchen Clark, a fifth-generation medium.

“All of a sudden, she started laughing at nothing,” Taggart tells The Post. “Apparently the spirit of her brother was in the room and told her a joke.”

“I told him not to interrupt me while I’m working,” Clark explained to her client and then turned to an empty spot and yelled, “Chapman, we’ve talked about this!”

She composed herself and returned to the reading and then just as quickly turned back to Taggart.

Clark closed her eyes and listened. “She says ‘Texas.’ What does ‘Texas’ mean?”

That encounter was just the beginning of a spiritual awakening for Taggart, who would spend the next 18 years documenting mediums in New York as well as Essex, England, and Antequera, Spain. More than 150 of her photographs, many never before seen, are published in her new book Séance (Fulgur Press).

Taggart didn’t set out to prove or disprove spiritualism. Rather, she says, she was driven by “a sinking feeling that these mediums knew something about life that I didn’t.”

When she first traveled to Lily Dale, it was out of curiosity.

Years earlier, her cousin had learned from a medium that their grandfather hadn’t died from heart disease — as Taggart had always believed — but by asphyxiation. She laughed off the story, until her parents confirmed it.

“Someone at the hospital put food into his mouth and left him alone,” her father had said, “and he choked.”

This story stayed with Taggart over the years, and she became consumed with “how a total stranger could have known the details of this tragedy.”

In 2001, at age 26, she decided to visit Lily Dale despite knowing nothing about the place except that it was a short drive from Buffalo, where she grew up, and the medium who revealed her grandfather’s secret had lived there.

The town was founded as a gated spiritualist summer retreat in 1879, and not much has changed since then. With a population of some 275 residents — many of whom are practicing mediums — it looks like a town frozen in the mid-19th century. Narrow roads are lined with old-fashioned houses, many adorned with signs announcing “the medium is in.” A rickety wooden auditorium in the center of town is typically “papered with flyers advertising trumpet séances, past-life regressions, astral-travel workshops, spoon-bending classes and circles to develop mediumship,” Taggart writes.

She arrived with no plan and was initially too nervous to do anything but drive around.

But Taggart eventually wrote a letter to the Lily Dale Assembly’s board of directors asking permission to take photos during what she first thought would be “one summer making a photo essay about this quirky little town.”

“I would just wander around and literally knock on people’s doors and say, ‘Would you talk to me? Would you teach me about spiritualism?’ ” she recalled. “And they very graciously did.” 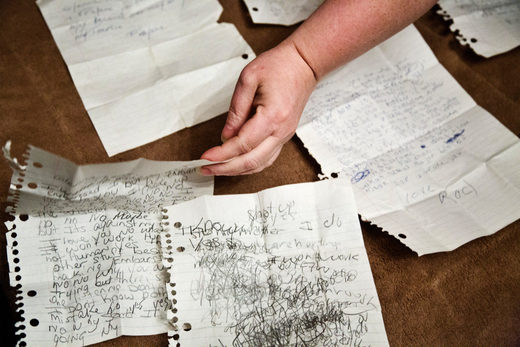 A medium claims to have received letters under her pillow from a man who lived in the 1800s after meeting him through a Ouija board.

What she learned from them wasn’t necessarily how to communicate with ghosts. It was a peek into a shadowy subculture that “was once a seminal force in Western culture,” Taggart writes. “A legacy that was absent from every textbook I had ever studied, including my histories of photography.”

Spiritualism — a belief system based not just on the existence of spirits, but the idea that they want to stay in contact with the living — was once part of the mainstream. It was embraced by public figures like psychoanalyst Carl Jung, evolutionary biologist Alfred Russel Wallace, poet William Butler Yeats and even Abraham Lincoln. But today, it’s almost entirely hidden.

“It flourishes in fiction and entertainment but is marginalized by academia and the media,” Taggart writes. The contemporary Western worldview is that spiritualism is the stuff of fiction. But after what Taggart witnessed, and photographed, she wasn’t so sure.

As her exploration took her overseas, she learned that not all mediums started out wanting to be mediums.

Reverend Jane from Erie, Pa., found the calling at age 6, when “she saw a spirit standing inside her grandmother’s closet,” Taggart writes, and discovered she could make supermarket cans fly across shelves and candles do somersaults in the air.

Others came to it after being triggered by the grief of losing a loved one.

British medium Simone Key, a lifelong atheist, was drawn to spiritualism after her mother passed and she began getting messages, on her long-broken word processor, that read: “We must communicate.”

Annette Rodgers of Essex, England, felt the calling after her 16-year-old daughter, Lauren, died from a heroin overdose. Two years later, still deep in depression, Rodgers attended a spiritualist church “on a whim and immediately felt ‘Yes, this is what I need,’ ” she told Taggart.

She now runs a spiritualist center in Spain and says her dead daughter visits regularly. 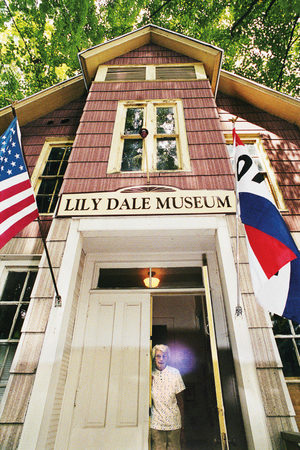 “I once saw Lauren turn Annette’s iPhone around on a table,” a fellow medium recounted to Taggart. “Her connection to her mother is that strong.”

But mediumship isn’t limited to communication with dead loved ones. Sometimes things get awkward.

Lily Dale medium Betty Schultz recalled a reading she had with a Catholic priest who was a regular client. “The spirits showed Betty a baby who had died and told her the priest was its father,” Taggart writes. Betty silently insisted to the spirits that there was no way she’d be sharing this information.

Without explaining why, she sent him to another medium — who later scolded Schultz: “Why didn’t you give that man the message from his baby?”

Taggart developed close friendships with some of her photo subjects, like Lauren Thibodeau, a longtime Lily Dale resident who found her way to spiritualism without any warning. She explained how she first went into a trance on New Year’s Eve 1989 in front of her husband and his friend, the best man from their wedding, “who never came to their home again,” writes Taggart.

Thibodeau shared one of the biggest headaches of spiritualism: uninvited famous people. Most mediums want nothing to do with celebrity ghosts — there’s no faster way to drive away an on-the-fence skeptic than “I have a message from Albert Einstein” — but Thibodeau says it’s sometimes unavoidable.

She remembers a session in which Elvis Presley’s ghost showed up unannounced.

“No!” Thibodeau shouted at the ghost. “I’m not doing this, get out of here!”

When the spirit refused to leave, Thibodeau apologized to her clients. “I’m sorry, I have Elvis here and I don’t know why,” she said. She then learned that the mother of the woman she was doing a reading for had been a housekeeper at Graceland.

For Thibodeau, it was a lesson in not being too quick to cast judgment. “Now, any time a spirit comes, regardless of who they are, I’ll give a message,” she told Taggart. “I don’t shoo them away. We communicate with dead people, and a dead celebrity is still dead.”

Even after almost two decades following mediums, Taggart isn’t sure she’d call herself a believer just yet. “I no longer subscribe to the popular belief that spiritualists are charlatans just trying to make money off of people,” Taggart says. “For the most part, I found them to be very sincere.”

But as for whether she believes in ghosts and life after death, the now 44-year-old is still on the fence. The closest she comes to sounding like a convert is when discussing an unsettling experience from 2013. It happened while she was visiting Sylvia and Chris Howarth, a married medium couple in England.

The morning after watching Sylvia do a séance in the dark — something the experienced spiritualist rarely did because “sometimes the phenomena continued into the next day” — Taggart was making tea in their kitchen and reached to open a cupboard.

“The ceramic knob exploded in my hands,” Taggart remembers. “Half of it shot into the air and crashed to the floor. The other half became razor-sharp and cut into my hand, and it started gushing blood.” Chris ran into the room, reached for the broken knob, and soon he was bleeding too.

So was it a paranormal encounter? She isn’t sure.

“All I know is, I still have a scar because of what happened that day,” she says. “And I still think about it all the time. So who knows?”

In this article:spiritual awakening, spiritualism