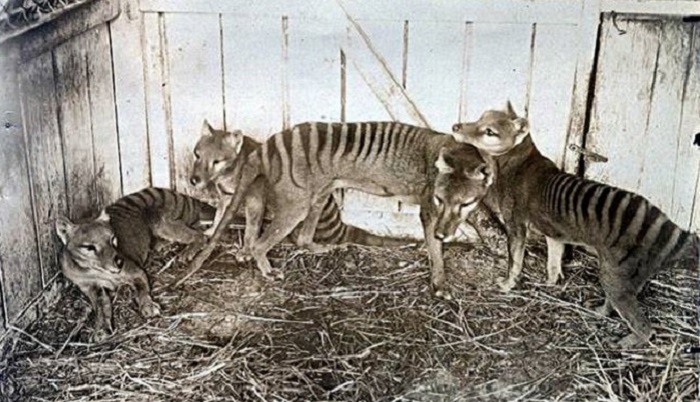 On September 6, 1936, a female Tasmanian wolf died at Hobart Zoo.

Autopsy showed that the cause of death of the animal was heart failure caused by old age. Perhaps, at that time, no one even suspected that another amazing and unique species of animal was disappearing on Earth that day.

For the extinction of the Tasmanian wolf, man had no direct fault, but no doubt played an indirect role.

The famous English zoologist and writer Gerald Durrell  writes in one of his books :

“… inhabiting new lands, humans destroy animals, without even having the time to really explore them.”

These words, spoken by the great defender of wildlife, can also be referred to as the Tasmanian wolf or, as scientists call it, thylacin (Thylacinus cynocephalus). It has lived close to people for about 3000 years, but there is very little reliable information about it.

The reason, obviously, was the same everywhere – the advent of representatives of other predatory mammals on these continents.

One of the peculiarities of thylacins is that they gave birth to “premature” little ones that looked more like embryos. Therefore, their mothers needed a special organ – a bag, where the baby crawled after birth and where it’s “development” occured.

With this method of birth, the fertility rate could not be very high, because they could not longer live in a small bag. The infant mortality rate for thylacins was extremely high. If they did not quickly reach their mother’s pocket, anything from colds to injuries could kill them.

Therefore, the number of thylacins, compared to placental mammals, that is, those whose babies are born more developed, was increasing slowly. So, if a representative of placental mammals begins to compete with a species of Marsupial mammalian group , then no doubt the former will quickly displace it.

Therefore, it is thought that the thylacines were “expelled” from South America, being invaded by foxes and coyotes, and from Australia by aborigines and dingo dogs (Canis lupus dingo).

But in the latter case there are some doubts. Scientists have repeatedly observed that even young thylacin can easily handle a pack of dogs several times larger than it.

The Tasmanian wolf had fantastic maneuverability and the ability to deal deadly blows.

Despite the fact that dingoes and tilacins fed on the same prey, they were unlikely to be deadly competitors, as dingoes were active during the daylight hours and the Tasmanian wolf was an extremely nocturnal hunter. In addition, tylacins preferred to live in mountain forests and dingoes in the Australian savannah.

Watch the only video of tilacin.

However, by the time the naturalist Harrison described in detail the emergence and anatomy of an “unprecedented animal”, the Thylacins inhabited only the island of Tasmania. In fact, Harrison coined the term Tasmanian Wolf, which is based solely on the external resemblance of thylacins to the common wolf.

But, in his way of life, this predator was a cross between a gold and a cat.

The thylacins were not very large – about 60 cm high and about 1.5 m long. Their magnificent sand coat was decorated with 12 black stripes that resembled the tiger’s color.

Thylacins spent their day in their asylum. Sometimes these animals were found sleeping in tree hollows 4-5 meters above the ground. They hunted at night.

Tylacins were fed exclusively on live prey. They were so contemptuous that he never returned to the corpse of the animal they had killed for second time.

In zoos, most of the tilacins even refused to eat thawed meat. This predator is thought to have ambushed and killed it’s victim by grabbing the base of it’s skull. Cats hunt this way, but not dogs.

Thylacins had the striking ability to open their mouth 120 ° – wider than any modern mammal. Thanks to this ability, the Tasmanian Wolf, without having long teeth, could deal a fatal blow to it’s victim.

There were times when thylacines chased their prey, but their sprinting skills were not good. On the other hand, they swam and climbed trees much better than dogs and cats. In addition, sometimes, chasing it’s prey, the thylacin bounced on his hind legs like a kangaroo. At the same time, it’s long, powerful tail served for balance.

The complete life of the Tasmanian wolves was disrupted by the arrival of immigrants from Europe to Tasmania in 1788. Initially, the majority of colonists were convicts, and they did not bother for these animals. However, when cattle farmers joined them, thylacins were threatened.

It is not known why the breeders decided that this animal was a danger to their flocks. There have been no reports of attacks on lambs and sheep from thylacins. They did not come close to the herds that were guarded by dogs, but hunted game in the forests.

However, farmers who did not understand the nature of thylacin soon declared a merciless war with them. Throughout the 19th century, the Tasmanian wolves were mercilessly exterminated. But even this active hunting did not reduce their numbers so much, as evidenced by the fact that in the 1980s, dozens of these animals were hunted for zoos.

At the end of the last century, a plague epidemic broke out in Tasmania. Many thylacins appeared to be susceptible to the disease. Since that time the thylacine population was localized in a mountainous region of Central Tasmania, it is not surprising that by the early 20th century this predator was on the verge of extinction.

The case of the last human murdered thylacin has been around since the 1930s. Six years later, the last specimen to live in captivity died. Since then, few have seen thylacin. There are reports of people who have encountered the Tasmanian wolf, heard its characteristic sounds or discovered its traces.

The last such case is from 1978, although after that date, the forester claims to have encountered thylacin, and he is a person well versed in animals.

In March 2005, the Australian magazine The Bulletin announced a $ 1.25 million prize for one who caught a live thylacin. Alas, the prize has not yet been received by anyone.

Three years later, Australian scientists tried to clone a Tasmanian wolf using genetic material from embryos of that predator, but most DNA is not viable, although several thylacin genes are still “living and working” in the cells of laboratory mice.

Every year there are expeditions to the center of Tasmania, but so far, enthusiasts have not been able to fully explore the area of ​​Tasmanian Wolf’s last refuge.

Many scientists believe that thylacins have survived. Perhaps that is why in the IUCN Red Book this species is still in the “endangered” section and not in the “extinct” section. However, optimists are getting less and less with each passing year.

It is true that a version has recently emerged that the Tasmanian wolf may have survived on small islands near New Guinea. The remains of thylacins, which are about 3000 years old, are often found in this region, and many have not yet been studied by scientists.

It can be said with certainty that thylacin was destroyed by human ignorance. If farmers knew that this predator was not a danger to their sheep and if they had vaccinated their dogs against the plague, then thylacin would not only have survived, but would have helped the Australians deal with the rabbit invasion.

May the sad story of the Tasmanian wolf serve humanity as a good lesson, the essence of which is that the wildlife world is extremely fragile and vulnerable so that it cannot be invades without considering the consequences of it.

If this lesson is not learned in the near future, the human race will share the fate of the Tasmanian wolf.