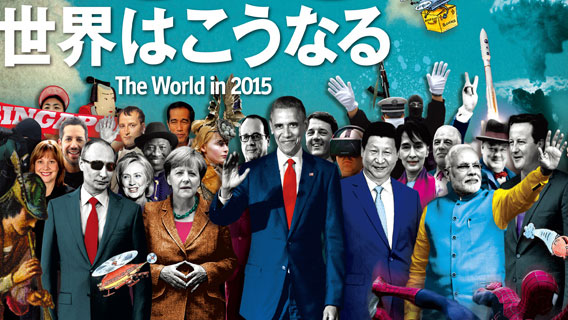 This article originally appeared in vigilantcitizen.

The magazine The Economist published an issue named “The World in 2015″. On the cover are odd images :  A mushroom cloud, the Federal Reserve in a game called “Panic” and much more.

I wouldn’t normally dedicate an entire article analyzing the cover of a publication, but this isn’t any publication. It is The Economist and it is directly related to the world elite. It is partly owned by the Rothschild banking family of England and its editor-in-chief, John Micklethwait, attended several times to the Bilderberg Conference – the secretive meeting where the world’s most powerful figures from the world of politics, finance business and media discuss global policies. The outcome of those meetings is totally secret. It is therefore safe to say that the people at The Economist know things that most people don’t. For this reason, its “2015 prediction” cover is rather puzzling.

The bleak and sinister cover features political figures, fictional characters and pop culture icons that will surely make the news in 2015. However, most importantly, it also includes several drawings that are extremely symbolic and allude to important elements of the elite’s Agenda. Here’s the cover : (You can view a larger version of the cover here).

At first glance, we see political figures like Obama and Putin, references to the Rugby cup and the new Spider-Man movie. But a closer look reveals a plethora of disturbing elements. Here are some of them. One side of the globe gazes stoically towards the West while the other side appears irate. Does this represent a confrontation between the East and the West? The cover features a few other symbols referring to the “rise of the East”. What’s more unsettling is that, immediately under that angry globe, are pictured a mushroom cloud (the kind that happens after a nuclear bomb goes off) and a spy satellite launching into space. High tech surveillance and nuclear warfare. The Economist is not very optimistic.

The Color of the Faces

Take a closer look at the faces of the personalities featured on the cover. Some of them are in full color while others are in black and white. Why is that?

Among those in black in white are Putin, Merkel, Obama, Hilary Clinton and David Cameron. Among those in color are David Blaine, a young person holding a “Singapore” banner (Singapore is the host of the 2015 SEA games) and a random guy wearing virtual reality equipment. A quick compilation of this data reveals that those in black and white appear to be part of the elite (including the ISIS guy who probably works for them) and those in color are “outsiders”. Is this how the elite perceives the world?

The presence of the Pied Piper on this 2015-themed cover is downright unsettling. The Pied Piper of Hamelin is a German legend about a man who used his magical flute to lure away the children of the city of Hamelin, never to be seen again.

This folkloric figure dating from the Middle-Ages is said to represent either massive death by plague or catastrophe, or a movement of massive immigration. It also perfectly represents today’s youth being “lured” and mystified by the “music” of mass media. Conveniently enough, there’s a small boy right under the Piper’s flute. Right under the Pied Piper we see a young boy with dumbfounded look on his face. He is watching a game called “Panic”. The words “Federal Reserve” and “Chi” (which probably stands for China) are on top while the words “Green light!” and “sis!” (which probably stands for “Isis!” or “Crisis!”) are at the bottom. The little boy watches as this twisted game of Plinko unfolds the same way the clueless masses watch powerlessly while various events unfold on mass media. As the name of the game states, the ultimate goal is to cause Panic around the world as crises are almost randomly generated by those who control the game. And that’s on a magazine cover owned by the Rothschilds. In front of Putin is a small aircraft on which is written Crop-O-Dust. This refers to the concept of crop dusting which is “the process of spraying crops with powdered insecticides or fungicides from an aircraft.” Right under the helicopter is a kid … eating something. Unsettling. A panda bear wearing a China-flag Speedo while flexing its muscles is a rather clear way of portraying the fact that China is gaining power. Next to it is a sumo wrestler holding a big battery on which the polarities (+ and -) are clearly indicated. Are they alluding to a switch in polarity in world power from the West to the East? Emerging from behind Obama’s leg is a ghost reading a magazine entitled “Holiday”. Why is this ghost, which represents a dead person, planning a vacation? Does it represent the fact that the masses will be so impoverished that the only time they’ll be on a holiday is when they’re dead? Does it relate to the countless people who died while traveling in the past months? Creepy. Standing in front of everything else, gazing right into our souls is a turtle with emphasis lines around its shell. What does it represent? Will turtles make a huge comeback in 2015? Probably not.

An angry tortoise is the symbol of the Fabian Society, an extremely powerful organization that has been working for over a century towards to formation of a single world government.

The philosophy behind Fabian socialism is basically the blueprint of what we call today the New World Order.

The Fabian Society is a very old group originating in England in 1884, with the purpose of forming a single, global socialist state. They get their name from the Roman general Fabius, who used carefully planned strategies to slowly wear down his enemies over a long period of time to obtain victory. “Fabian Socialism” uses incremental change over a long period of time to slowly transform a state as opposed to using violent revolution for change. It is essentially socialism by stealth. Their original emblem was a shield with a wolf in sheep’s clothing holding a flag with the letters F.S. Today the international symbol of the Fabian Society is a turtle, with the motto below: “When I strike, I strike hard.”
– The Fabian Society, The Weather Eye

The Fabian Society used to openly advocate a scientifically planned society and supported eugenics by way of sterilization. Its original logo was a wolf in sheep’s clothing … But I guess that was not the best way to conceal the wolf from the masses.

Bringing forth a global system through small incremental changes is exactly what the world elite is currently doing. This is probably why there’s an angry tortoise on the cover of this Bilderberg-connected publication – standing in front of the chaos behind it. The lower right side of the cover features some more cryptic symbols. There’s a pile of dirt on the ground and two arrows on which are inscribed 11.5 and 11.3. Are those dates to remember? Why are they next to a pile of dirt? If you look up these figures as coordinates, they point to somewhere in Nigeria. Displaying numbers that can only be truly understood by “those in the know” is one of the occult elite’s favorite hobbies.

Standing in front of the dirt is Alice in Wonderland looking upwards towards the Cheshire Cat. This iconic cat is known for disappearing entirely, leaving only visible its creepy grin. We therefore see another allusion to a world of fantasy, illusion and deceit as perceived by Alice – a representative of the masses. Along with the somewhat unnecessary inclusion of David Blaine – a magician – the cover mixes real world events with illusions.

Other notable symbols on this cover include a piggy bank flying from James Cameron’s pockets;  A model wearing an Alexander McQueen creation (the elite’s favorite designer who died in strange circumstances) and an Asian officer wearing a facemask to protect him from a deadly disease.

The Economist is not a random newspaper that publishes quirky 2015 predictions to sell a few additional copies. It is directly connected to those who shape global policies and who make sure that they are applied. The publication is partly owned by the Rothschild banking family of England and its editor regularly attends Bilderberg meetings. In other words, The Economist is connected to those who have the means and the power to make “predictions” a reality.

The 2015-themed cover basically reflects the overall Agenda of the elite and is peppered with cryptic symbols that appear to be included for “those in the know”. And the masses, like Alice watching the Cheshire Cat disappear, will focus on illusions while the wolf in sheep’s clothing will strike … and strike hard.

Advertisement. Scroll to continue reading.
In this article:The Economist 2015