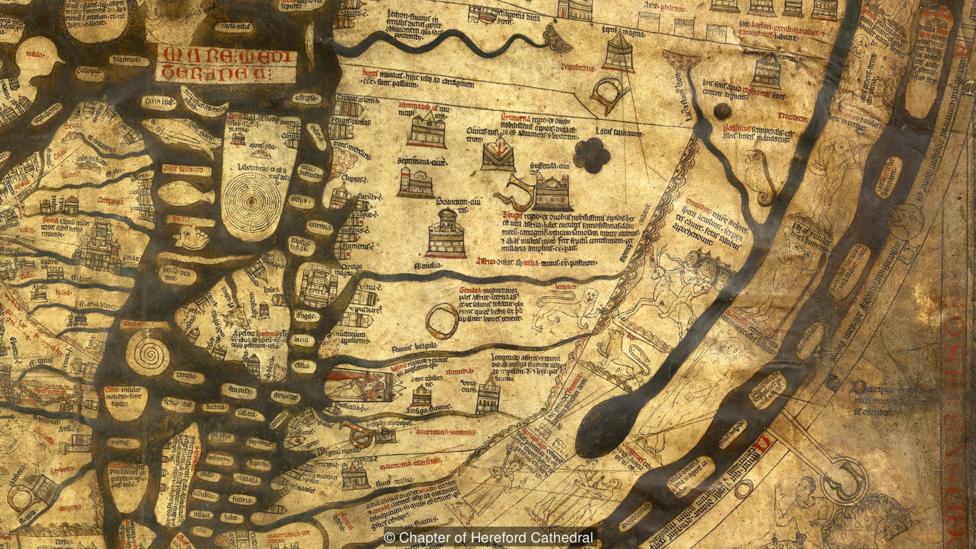 In the middle of the 19th century, under the floorboards of the British cathedral, a very original work of the master cartographers of the Middle Ages was found. On a piece of calfskin stretched over a sturdy oak frame, a detailed map of the world was drawn as it was imagined by Europeans living in the 13th century. In honor of the cathedral, the find was named the Hereford Map.

A cocktail of lore and legend

Vivid illustrations in colored paints reflected the medieval worldview. The map was not intended for orientation or navigation, but was rather a mixture of knowledge, legends and legends.

The geographic part of the find caused the least questions. East is at the top of the document because this orientation represented the sunrise and the second coming of Christ. Jerusalem (the navel of the Earth) is located in the very center, which is a characteristic feature of medieval European mapping.

Among the images of the continents, one can see Africa, Asia and Europe. More than four hundred cities are plotted on the map, where, along with the capitals, there is also the birthplace of the relic – Hereford, several seas (Red, Dead, Adriatic) and rivers (Nile, Euphrates, Tigris, Ganges).

There is even a small part of modern Russia and Ukraine on the map – the Sea of ​​Azov, Don and Dnieper, where, according to medieval scholars, there was a golden fleece.

Researchers have counted eight classic legends on the Hereford map, and the stories about the search for the golden fleece, the labyrinth of the Minotaur and the exploits of Hercules are adjacent to the image of the camp of Alexander the Great and other real historical events.

In addition, the relic contains numerous scenes from the Bible. In addition to Jesus, who occupies a place of honor at the top of the map, it depicts the journey of the righteous to heaven, and sinners to hell, symbolically represented in the form of the gaping mouth of the beast.

Paradise, as the medieval cartographer believed, is located on the site of modern Japan. During World War II, this fact was widely reported in Japanese school textbooks.

The greatest interest for the inexperienced viewer is undoubtedly the diverse fauna depicted on the map. Among the bizarre, but quite recognizable elephants and camels, the medieval artist depicted such mysterious animals as the unicorn and the basilisk.

The illustrations of exotic aliens are no less amusing. Probably, the distorted oral stories of travelers about distant countries and wild morals reigning there inspired the creator of the map to depict incredible creatures.

On the map you can see such “races” as blemmias – warlike humanoids without heads, but with faces on their chests, and monocles – little men with one very large leg, under which they hid from the hot sun.

The African continent on the Hereford map is inhabited by troglodytes. Three of these creatures are drawn hiding in caves, and one is riding a certain horned beast.

For more than 700 years, tens of thousands of visitors saw the Hereford map, over time the images lost their brightness and clarity, but experts managed to save the memory of such a valuable exhibit. In 2013, with the support of the Mappa Mundi Foundation, an interactive 3D version of the ancient manuscript was created, which not only conveys the general view of the map, but also gives meaningful explanations to each of its elements.

Although the map depicts a fictional world, researchers do not give up hope that it will shed light on the secrets of humanity, and may even lead to unexpected discoveries in botany and biology. In addition, the relic is of undoubted historical interest and today is the largest medieval map in terms of size.

In this article:Hereford Cathedral, Hereford Map