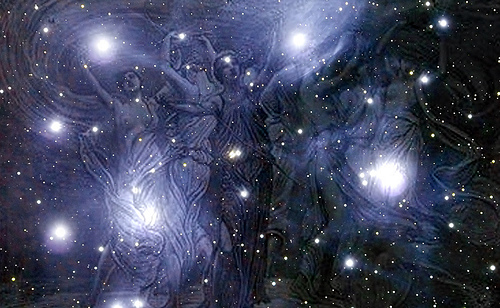 WHO ARE THE PLEIADIANS?

The Pleiades are a cluster of beautiful, dazzling stars located in the constellation of Taurus.  With a telescope, you can see about one-hundred stars.  Without  a telescope, you can see only six or seven stars.  According to ancient legends, the stars are said to be sisters and the daughters of Atlas. The entire Pleiades cluster is actually the eye of the bull in the constellation of Taurus..

The seven bright stars that helped guide Greek sailors are: Alcyone, Merope, Celeno, Taygeta, Sterope, Electra and Maia. They have been known for thousands of years, surrounded by fascinating legends and stories even to this day. The American Indian Religious Freedom Act was passed in 1979.  Amazingly enough, up until that time, Native Americans were illegally forbidden to practice their traditional rituals and ceremonies. You may wonder what Native Americans have to do with the Pleiadians, but the stories are in their legends, much of which has been encoded, kept secret or hidden. In certain Cherokee legends, it is said that their people originated in the Pleiades long, long ago. They claim to have come to this world as Starseeds to bring Light and knowledge. If the stories are true, then modern day Cherokee, as well as other Native Americans, and many of us with Native American blood contain Pleiadian genes!

In this article:Pleadians, Trance Channeling