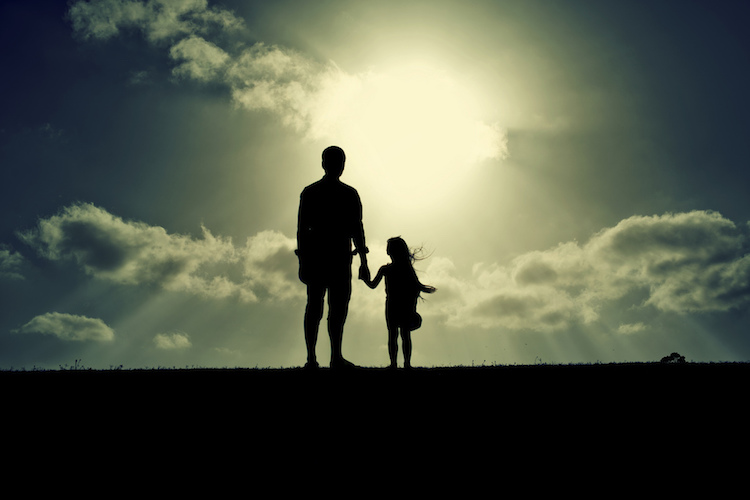 “He who cannot howl, will not find his pack.” ~Charles Simic

In a world bloated with inert, impotent and domesticated father’s, the All-father stands head-and-shoulders above. He is a masculine Gaia-force. He is Shiva animated by Shakti. He’s not a boyfriend. He’s not a tamed poodle at the feet of Codependence. He’s a liberated wolf aware of how everything is connected to everything else through interdependence. He’s a self-overcoming, provident man, free to live with purpose, on purpose, despite outdated cultural platitudes and parochial values regarding what fatherhood “should” be.

If, as Goethe said, “there are only two lasting bequests we can hope to give our children. One of these is roots, the other, wings,” then a mother (and perhaps a typical father) gives the child roots, whereas an All-father gives the child wings.

Above all, an All-father is painfully authentic, uncomfortably vulnerable and full of tough love. He has reconditioned the culturally conditioned ideal that a father must be domesticated, invulnerable, and full of violence to be a “good father.” He all at once nixes the outdated notion that “father” and “provider” are automatically synonymous.

He redefines the values of fatherhood for himself, openminded and imaginative, transforming such cliché misnomers as “breadwinner” and “wage-earner” into giver and protector. He is a shield, a guide, and a gift-giver, not a cog in a clockwork, a monkey in a machine, or a slave in a sweatshop. He is Hunter and Gatherer, Lover and Warrior (self-defense). As Aubrey Marcus said, “A wild man is a protector. A father. A warrior for all that is good… He is a force. He is a cause for an effect. He is a mission.” So it goes also for the All-father.

“For thousands hacking at the branches there is one striking the root.” ~Henry David Thoreau

Most of all, he is free to be imperfect, understanding that true authenticity requires honesty regarding one’s faults and foibles. The All-father allows himself to be a gloriously inglorious, perfectly imperfect, independently interdependent father. He just tries his best and teaches his best and lets the chips fall where they may. As Sue Atkins said, “There is no such thing as a perfect parent. So just be a real one.”  The All-father is as real as it gets.

As a student first, he learns from his children. He’s open to what they have to teach him. In this way he steps into a deeper and fuller fatherhood, embodied by a strength that is not cut off from empathy and softness, but is rooted in body-centered becoming. He is not armored and invulnerable against what his children are teaching him, rather he is highly sensitive and alive to the balance and deep connection building between them.

The All-father teaches through Nature (moderation/cooperation) first, and Pain (discipline/self-improvement) second. He teaches resilience through eco-conscious awareness, building upon what Mother Nature has to teach, deciphering her “language older than words” and then translating it for his children. In this way, he co-learns/teaches the Universal Laws which dictate the difference between what’s healthy and what’s not. Nature and the Human Soul by Bill Plotkin is a good primer for this.

The All-father helps his children use Pain as a guide, resolving issues of dissatisfaction, disconnection, and self-doubt by teaching them how to face their fears, their shame, and their unresolved wounds, thus bringing their head, heart, and guts (mind-body-soul) into full-blooded alignment. He teaches how to distinguish between anger and aggression through meditative martial arts, and between thought and feeling through mindfulness meditation and self-interrogation. He teaches the importance of neither rejecting nor succumbing to the “Dark Side” of power but reconciling and learning from it instead. He teaches how to bring the shadow out of the dark.

Captain Fantastic and the bridge to the Übermensch (Overman):

“I teach you the Overman. Man is something that should be overcome. What have you done to overcome him?” ~Nietzsche

The All-father does not seek to condition young minds into fixed and outdated ways of viewing reality, instead he is intent upon teaching young minds how to recondition their own minds into perceiving reality in flexible and updated ways, piggybacking off the following Aristotelean wisdom: “It is the mark of an educated mind to be able to entertain a thought without accepting it.” In short: he does not teach his children what to think but how to think.

He does not seek to raise last-generation men and women, he seeks to raise next-generation men and women. In this sense, he is willing to be a bridge to the Overman. Hoping that his children will become the Overhumans that will finally be able to cross over. If not, at least he has paved the way for them so that they may pave the way toward furthering the progressive evolution of the species.

The All-father teaches a yearning for greatness and a longing for vastness. He strategically plants seeds of heroism into the soft loam of youth in the hopes that they will grow into courage and resilience. But he understands that resilience will only get one so far, so he goes beyond teaching resilience and imparts methods of antifragility. As explained by Nassim Nicholas Taleb, “Antifragility is beyond resilience or robustness. The resilient resists shocks and stays the same; the antifragile gets better.”

The All-father wants to be surpassed by his children so that he and the human species, as a whole, may learn what they have to teach. As such, he does not cling to his mastery but proactively recycles his own mastery in order to be a healthy-minded example for his children. In this sense, he teaches how to stand on the shoulders of giants without getting stuck on any particular shoulder. He teaches self-interrogation and the ability to question to the nth degree.

At the end of the day, there are very few examples of All-fathers in our culture. The closest I’ve come across is the movie Captain Fantastic. Although this movie goes a little extreme with the off-grid sustainable lifestyle, it strikes at the heart of what it means to be a father rising above traditional and cultural fatherhood clichés.

Like the All-father, Captain Fantastic is set upon raising intelligent, eco-conscious, open-minded individuals who are confident and courageous enough to question things regardless of authority (even his own) in order to co-create with them alongside Truth, rather than attempting to pigeonhole Truth into some outdated ideal.

In this article:Captain Fantastic, father