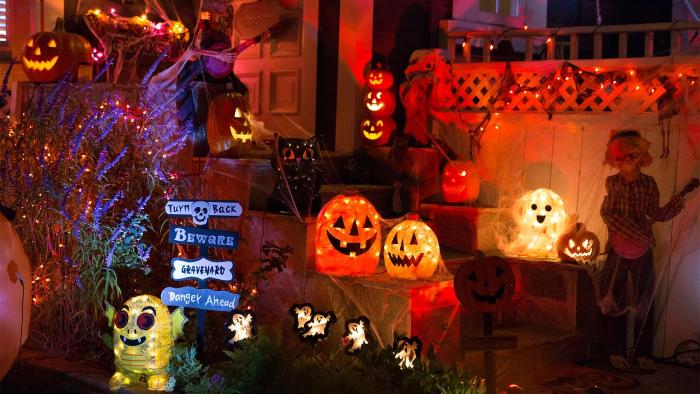 In the United States, the history of a century ago is repeating itself: in 1918, the Halloween celebration was canceled due to the Spanish flu epidemic – the noise of parties disturbed the sick in the hospitals. Mass events were banned this year due to the COVID-19 pandemic, but many Americans still decorate their homes and are going to celebrate the holiday online. They did not break traditions in the White House either. At the same time, some US residents are wondering: is it worth celebrating Halloween in 2020, when all thoughts are about death due to the coronavirus?

Americans have already begun preparations for the Halloween celebration, despite the cancellation of mass events. The focus has shifted from hosting parties to decorating their own homes and virtual flash mobs in which Tiktokers offer to dress themselves up as dead Disney princesses . However, some social media users have questioned the need to celebrate Halloween this year, given the coronavirus pandemic.

“This Halloween will be the scariest one,” they tweet.

100 years ago in the United States there was a similar situation : all Halloween parties were canceled due to the Spanish flu epidemic, which killed 50 to 100 million people worldwide.

On the eve of Halloween, the number of cases of the Spanish flu increased – the second and most powerful wave of the epidemic occurred.

“Not only was there a peak in mortality on Halloween eve, but there were some pretty strong waves of disease,” Carolyn Orbann, assistant professor of medical sciences at the University of Missouri-Columbia , told CNN .

“The highest death rate was observed from October to December, possibly due to a more deadly strain of the virus and crowding in hospitals and military camps.”

However, those Americans who were not affected by the disease were tired of being locked up in quarantine and demanded a holiday. There are reports of local newspapers that year, which say that they celebrated more than ever “harsh and stormy”: and in Alabama, crowds of boys running from home to riots, forcing the police to drive on false calls and provoking accidents. A reporter for The Birmingham News wrote that after a month of quarantine, Birmingham residents were literally torn apart from the desire to celebrate Halloween.

“The Health Council’s order banning parties acted like a red rag for a bull — the killer joy of ordinary Halloween festivities poured in,” wrote local media in 1918. The Americans celebrated so vigorously that the San Francisco authorities had to ban people from making noise, because loud noises irritated patients in wards.

“Conditions were dire in most places in the United States by October 31, 1918,” Elizabeth Otka, professor of English at the University of Richmond, told CNN. –

Shops, schools, churches were closed, there was devastation and the realization that celebrating Halloween was a bad idea.”

Denver has banned parties, during which they usually arranged “diving for apples, tying the tail to a donkey with a blindfold and other entertainment.” Many states have canceled Halloween celebrations for economic reasons – so as not to waste extra food supplies. “I saw a report from Missouri where they usually throw dry corn into each other’s house,” Orbann said. “But in 1918 the price of corn was too high to be scattered, and the children used sawdust to do it.”

Although public gatherings were banned in cities, some people threw house parties. “People did not break the rules, but adjusted to them,” the historian noted. Despite the horrors of the Spanish woman in 1918, people wanted to celebrate and visit each other, as now, in a pandemic, Elizabeth Otka notes. “1918 was remembered for the stacks of coffins and dead bodies, the gravediggers were simply exhausted,” she added. – Nevertheless, many continued to live as before, if none of their relatives was sick, forgetting how dangerous it can be.

It seems reasonable to spend Halloween this year differently, although I love the holiday, it’s great. But to stay alive, I think, is still better. “

To prevent a 100-year-old history from repeating itself on an entire scale, the Los Angeles authorities banned any Halloween parties, gathering at haunted houses, and children from running to neighbors for candy, although, according to tradition, they and so should be in masks and costumes – carnival. But the Americans are not discouraged and carry out flash mobs on the Internet. So, the participants of one of them on TikTok are invited to fantasize about what would become of the Disney princesses if they did not live to see the happy ending.

Another resident in quarantine, Samantha Browning, came up with the idea of ​​painting Barbie toy doll houses for mysterious mansions from horror films. Her new hobby takes Samantha 5-10 hours. With Halloween approaching, items created in the summer have become more relevant, because now, in order to beg for sweets from neighbors, you don’t have to go to their houses, but do it in front of Samantha’s creations “contactlessly”.

“This year the pandemic canceled the traditional Halloween, but I decided to adapt the pipe railings on one of my mansions so that candy would slide down for families who still want to celebrate the holiday in a safe way,” explained Samantha on social media. “One of my dollhouses is on the inside veranda, and on Halloween night, I’ll probably put two of the creepiest houses outside with battery-powered candles.”

They did not cancel the holiday in the White House, even despite Trump’s illness. This was announced on Tuesday by CNN, citing a source. It is noted that when celebrating Halloween, the recommendations of the federal Centers for Disease Control and Prevention will be taken into account.

This means adherence to the mask regime and other preventive measures. Usually on this day, relatives of the US administration staff , families of American military personnel and students of the capital’s schools are invited to the White House , and the head of state and the first lady treat children to sweets on the South Lawn of the White House.

Advertisement. Scroll to continue reading.
In this article:COVID-19, Halloween 1918