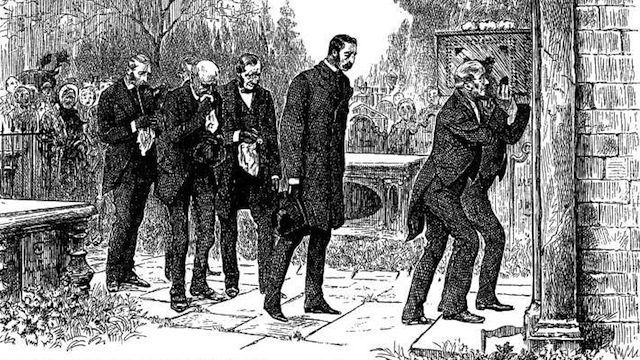 The Victorian Era may not have had its own version of the Darwin Awards, but thanks to the miracle of newspaper records, we can reflect on the bizarre deaths and disasters of yore. The blog The Baby Died collects morbid clippings from 100 years ago, featuring billiard ball, corset, and umbrella-related demises.

Ross Horsley works at a local history library, where he encounters all manner of black-and-white oddities. His blog gathers offbeat crime reports — deaths, drunks, disorderlies — from English newspapers. And there’s some true strangeness among the records, such as death by billiard ball:

A singular fatality occurred on Wednesday night at a public house in Soho, London. Some men were in the billiard-room when one of them attempted to get a billiard-ball into his mouth. This feat he had previously accomplished and had successfully removed the ball. This time, however, he failed to extract it, and it became fixed in his throat. A cab was immediately fetched, but while being removed to the hospital the unfortunate fellow expired. (Yorkshire Evening Post, November 3rd, 1893)

The Wolverhampton Deputy Coroner held an inquest yesterday on the body of Harriet Cross, widow, 50 years of age. The deceased was coming out of a tradesman’s shop, when she fell down the steps, and the handle point of the umbrella she was carrying was forced into her right eye. Inflammation of the brain supervened, and caused her death. The jury returned a verdict of “Accidental death.” (Yorkshire Evening Post, October 25th, 1893)

And the fatal consequences of tying your corset too tightly:

On Sunday morning, as the service at Wimslow Church was about commencing, a young woman from Macclesfield, named Jane Goodwin, 22 years of age, who had just taken her seat near the pulpit, was suddenly taken ill, and was carried out of the church to the sexton’s house ; but before her friends got there she was a corpse. Her death was caused by being too tightly laced. (Dundee Courier, October 22nd, 1844)

The rest of the listings offer a smorgasbord of innovative ways to die, as well as endless Victorians who drank their ways into the evening post, if not the grave.

In this article:morbid clippings, Victorian Era