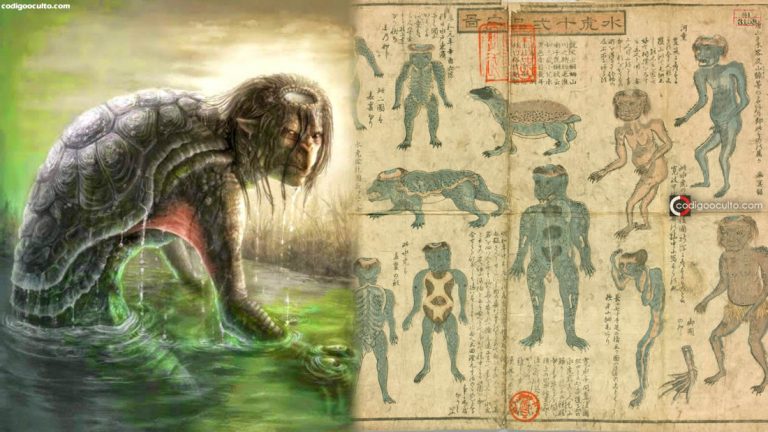 The Kappa is an ancient and violent legendary hybrid, a species of humanoid amphibians that according to the legends inhabit the waters of Japan.

The Kappa would be other of the mythological hybrids that would have been dispersed throughout Asia. They would be surviving hidden from humanity under the waters of rivers, lagoons, and swamps of Japan, attacking human beings. Some researchers consider that they could be of extraterrestrial origin since they are similar to other ancient amphibious deities.

Kappa translates as “river boy”, they are part of Japan’s folklore since ancient times. They are also considered ethereal, spiritual or semi-spiritual since the Japanese consider him a demon. It is part of a strange demonic species called yokai.

The Kappa: negative deities of the waters

Among its characteristics are: height of 2 meters (approximately), skin covered with green or blue scales and they have been described with a turtle shell. They would also have a “dish” on their head, where they would carry water that would provide them with vital energy, since without the water, on the surface, they would become dehydrated and lose their energy.

They are considered very malicious and violent since they would-be predators that chase children to drown and eat them. Although the Kappa is only seen as a legend, in the rural areas of Japan there are still accounts of encounters with these entities. In fact, to this day there are warning signs in supposed “territories” of Kappas.

Something very strange is that, according to folklore, the Kappa are attracted to an object called shikirodama, a kind of precious stone that would contain the vital energy of human beings and that would be located in the shiri (the anus). That’s why they would attack humans.

Something shocking is that in 2014 the discovery of some anomalous mummified humanoid remains was published, with a webbed hand and afoot. It was reported that these remains were given to the Miyakonijo Shimazu family after a Kappa was shot on a riverbank in 1818. The alleged remains are fascinating and mysterious, but, so far, it has not been confirmed whether they are a fraud or not.

The drawings of these entities show them very similar to the alien race of the Reptilians, but they also emulate other stories of amphibious creatures from various cultures of the world. One might think that they would have an extradimensional (interdimensional) character since they would use bodies of water as portals to pass to Earth and devour humans.

Many ancient civilizations speak of deities that “fell” or descended from the sky and then remained to dwell under rivers or lagoons, such as the Nommo beings of Dogon mythology, or the Oannes god of the Sumerians and Babylonians.

The Nommo were amphibious aliens who would have come from the Sirian star system, although they would not be violent like the Kappa, they would only have come to communicate. The Kappa do appear to be very negative with humans, so I compare them with the Reptilians (in addition to their extradimensional mean character). You might think that they would be extraterrestrial hybrids that may have been abandoned in Japan. The myth of the Nommo, for example, specifically speaks of genetic manipulation by them (in humans).