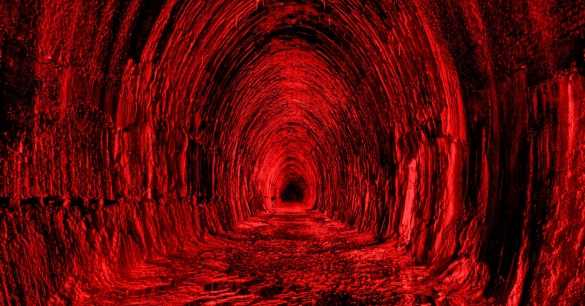 There is a place on the northern shore of the Bay of Naples that has long been steeped in history, mystery, myth, and magic. Known as the Phlegræan Fields, it is a desolate place; a barren wasteland strewn with rubble and intersected by deep underground vents that belch out choking fumes and fire. Legends and strange phenomena cling to this hellish, smoke-wreathed landscape, so it is perhaps no wonder that these fields are a location believed since ancient times to hold a tunnel that leads to Hell itself.

The Phlegræan Fields is a plateau that is part of an ancient volcanic caldera not far from Mt. Vesuvius, the volcano known for laying waste to the once great city of Pompeii. The heavily volcanic area, which is pitted with steaming vents, sulphur spewing crevasses, and even flaming holes in the ground, was well-known in Greek and Roman myth and is heavily associated with stories of magic and prophecy.

One of the greatest legends originating from here is that of the Cumæan sibyl, or prophetess, that was featured in Virgil’s epic the Aeneid, which tells of the hero Aeneas’ journey through the Land of the Dead, guided by the Sibyl. This prophetess took her name from the nearby town of Cumae, itself having the legendary distinction of being one of the landing places for Daedalus, the mythical father of Icarus of lore. The Sibyl was depicted as a woman bestowed with immortality by the sun god Apollo and gifted with powers of prophecy, who was said to dwell in a cave somewhere in the Fields that also served as an entrance to the underworld. Her powers were described as vast, and Virgil liked to depict her sitting in her cave feverishly scrawling the future onto leaves. An interesting story concerning the Sybil is that she once possessed nine magical scrolls that allegedly outlined the entire future of Rome in detail, which she offered for an exorbitant sum to a Roman king by the name of Tarquinius Superbus, also known as Tarquin the Proud. When the king refused her offer, the Sybil proceeded to methodically destroy the scrolls until the king finally coughed up the vast amount of money she had demanded, and had the last remaining three sequestered away in a hidden place.

Although this may all seem like pure fantasy, this story is significant in that there really was a king by the name of Tarquinius and there were indeed three scrolls kept by the Greeks that came to be known as the Sibylline Books, which were thought to be the actual texts acquired by Tarquin from the Sybil. These scrolls were typically securely locked in a stone vault deep beneath a place called The Temple of Jupiter and although it is unknown if they had any real prophetic powers, the Greeks certainly thought they did, as the scrolls were said to occasionally be used to divine the future in times of imminent crisis or disaster so that such hardships could be avoided. The scrolls were considered to be of extreme importance at the time and were protected at all costs. So desperate were the Greeks to keep these scrolls that when the temple was burned down in 83 BC, envoys were allegedly sent to the far flung corners of the earth searching for any pieces or fragments that might have survived so that they could be reassembled.

The Cumæan sibyl with her prophetic scrolls.

It is these intriguing grains of truth inherent to this legend that have beckoned adventurous souls for centuries, who believed that there could possibly be a real cave where the Sybil resided and that it could really descend literally into the depths of Hell itself. The historically accurate features of the tale have also been cause for historians, archaeologists, folklorists, and scholars to wonder if there actually was, if perhaps not a literal opening to the underworld, then a previously unknown and unexplored cave or tunnel system that lies at the heart of the legends of the Sybil’s cave. Various searches and expeditions of the Phlegræan Fields were undertaken over the years to discern the location of this mythical cave yet turned up nothing. In the face of the lack of any further physical evidence to point to a real cave or tunnel at the root of the legend, the possibility of one existing seemed more and more doubtful, and the Sybil’s entrance to the underworld faded once again into mere myth.

The legend of the Cumæan sibyl’s mysterious cave may well have remained shrouded in myth and legend forever if it weren’t for a curious discovery made in the 1950s in the ancient Roman luxury resort town of Baiae, a place located in the western portion of the Fields that was once renowned throughout the Empire for its spas with reputed healing powers.

Advertisement. Scroll to continue reading.
In this article:Ancient roman tunnel