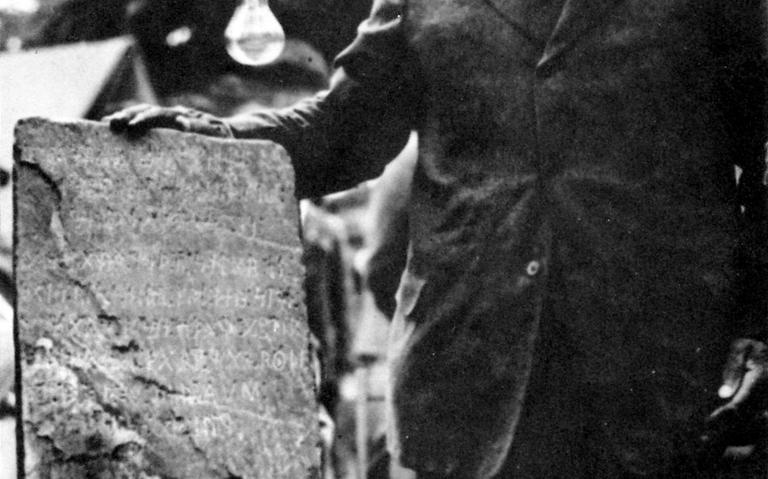 The origin of the Kensington Runestone has been the subject of much controversy and speculation for well over a century now. The 200-pound rune-covered slab was unearthed in 1898 by a Swedish American farmer named Olof Ohman while he was felling a tree on his farmland near Kensington, Minnesota (roughly 15 miles west of Alexandria).

As Ohman and his 10-year-old son Edward were clearing the land, they found the stone lying face down, entangled in the roots of an aspen tree located on a small knoll. Ohman’s son was the first to notice the rune carvings on the stone, which Ohman incorrectly suspected were of Native American origin.

Little did anyone know at the time that Olof’s accidental discovery would set in motion a whirlwind of events that would ultimately change the life of Ohman and his family forever.

To say that the origin of the Kensington Runestone has been a lightning rod for debate would be a gross understatement. For more than 100 years now, the iconic stone has been studied by geologists, runologists, scientists, and linguists alike, all attempting to ascertain whether or not the rune inscriptions on the stone are indeed authentic.

The main question at the center of the debate is how a runic artifact, clearly dated 1362, could surface in North America. Several scholars and linguists have rejected the stone as a hoax, claiming that some of the runes on the stone didn’t even exist as part of the language in 1362, implying that Ohman must have carved the inscriptions himself.

Every time that this type of situation has taken place, inevitably some new series of medieval runes are discovered in Europe that correctly date the stone to the 14th century.

The old Germanic language found on the Kensington Runestone is so complex and loaded with nuances of form and structure that only a tiny handful of people with extensive training in old Germanic linguistics could even attempt to carve something of similar complexity. The likelihood of a rural farmer in 1898 being able to accomplish this type of intricate carving is essentially zero.

Within roughly twenty years of the stone’s discovery, a Minnesota-based geologist named Winton Minchell began to take an interest in the stone and performed several studies to determine its origin.

Even with the somewhat limited science of his day, he was able to conclude that the carvings in the rune stone were indeed very old, and that there was no reason to doubt that the 1632 date inscribed on the stone was accurate.

In the year 2000, another Minnesota geologist named Scott Wolter began performing scientific tests on the stone by comparing the deterioration of silicate minerals found in Colonial gravestones of similar composition and environment with the deterioration in the Kensington Runestone.

Through several rigorous tests, he was able to determine that the carvings in the stone were already centuries old by the time the stone was unearthed, and could not have possibly originated in the late 1800s.

Although Wolter’s findings do not conclusively state that the rune inscriptions were carved in the exact year of 1362, they do confirm that they could not have been carved by Ohman or anyone living during his time period.

The inscription on the rune stone has been roughly translated several times throughout the past century, and its meaning is somewhat benign; it tells the story of a group of sailors on an expedition that presumably set up camp on or close to the place where Ohman discovered the stone. The prevailing (and generally accepted) translation reads as follows:

“Eight Gotalanders (a.k.a. Geats or Goths) and 22 Northmen on an acquisition journey from Vinland far to the west. We had a camp by two shelters, one day’s journey north from this stone. We were fishing one day. When we came home, we found 10 men red from blood and dead. Ave Maria, save from evil.”

Also, on the side of the stone is the following inscription (prevailing translation):

“There are ten men by the inland sea to look after our ships 14 days’ journey from this peninsula (or island). Year 1362.”

Many critics have accused Ohman of forging the inscriptions due to his Swedish heritage, claiming that he was looking for a way to validate the famous Swedish tales of their Viking ancestors settling in America long before Columbus.

To this end, many fame-seeking scholars, linguists and academicians have published books refuting the authenticity of the rune inscriptions, asserting that Ohman knew enough about runes to simply carve the inscriptions himself, and that he “pretended” to find the stone in order to gain notoriety.

This is a flimsy argument, especially in light of the rune stone’s linguistic complexities, as mentioned earlier. These accusations have been leveled at Ohman over and over again over the past century, although there is absolutely no concrete evidence that Ohman ever attempted to leverage his discovery of the Kensington Runestone for personal gain, financial or otherwise.

The Ohman family has never denied that the Kensington Runestone is a genuine medieval artifact, and they have staunchly maintained that stance ever since Ohman’s discovery in 1898.

The Kensington Stone now rests in a small museum in Alexandria, MN. Time and time again the academic or scholarly publications that have questioned or dismissed the authenticity of Ohman’s story have been refuted by way of new scientific findings.

Unfortunately, many scholarly skeptics and naysayers have allowed their own personal agendas to interfere with objective research, publishing biased findings that inevitably have to be retracted later.

Equally unfortunate is the negative toll that this protracted controversy has taken on many members of Ohman’s family. It is hard to believe that an innocent finding by a Swedish farmer in 1898 could be the source of a century-plus long battle rife with controversy, manipulation, deceit, and contention.

Two of the most repeated critiques against the stones authenticity are an out of time word and a claimed hidden cipher.

The criticism of an out of time word concerns the signal use of the of the word opþagelsefardþ (journey of discovery). Skeptics contend that is this is a relatively new word and did not exist in the 14th century.

Those supporting the the rune stone’s authenticity hold that the runes can also be translated as uptagelsefart (acquisition expedition). Critics argue that this would be inconsistent with how similar runes were used elsewhere on the stone. This criticism seems to assume a well educated rune smith created the stone.

The hidden cipher was first claimed by Mats G. Larsson in a paper in Saga och Sed 2010. Larson suggested that the numbers taken in sequence as they appear on the stone when reversed revealed a hidden cipher for Ohman’s signature.

“Öh mans fan vi ved hade ved sten”, or in English, “The Öhmans found. We kept/collected firewood at the stone.”

Note: The above is Larsons published translation and requires a mixture of Danish and Swedish. The unfiltered translation is “Ohmans found we by wood stone”

On face value this sounds pretty damming but for some reason has not been widely circulated by Bad Archeology websites. Maybe this is why. If one is allowed to mix Danish and Swedish as Larson did then you can also arrive at:

Why would Ohman call himself an idiot? Also if Larson’s alleged secret signature is correct it’s an odd one. The message, if real, seems more about finding fire wood than taking credit for the creation of the stone. Larson’s cypher may be a form of pareidolia or finding meaning based on ones personal bias.

The nuances of the accusations have changed a little over time as more evidence has surfaced supporting the genuineness of the Kensington Runestone; critics now claim that although there is no evidence that Ohman carved the stone, they still dismiss its historical authenticity. Their big argument? “It may not have been Ohman, but it was ‘someone else’.”

It almost seems as if many skeptics are willing to accept just about any other possibility except that the 1362 party actually did carve the inscriptions. Although there are many that would still attempt to refute the validity of the Ohman family’s claims, the authenticity of the Kensington Stone has stood the test of time.