More than 50 years ago, in the Canadian fishing village of Shag Harbor, Nova Scotia, an extremely unusual event took place.

At least 11 people are becoming it’s eyewitnesses, which is one of the largest UFO sightings in Canada.

On October 4, 1967, at 11.30am, the residents of the small port fishing village of Shag Harbor saw that suddenly something bright was flashing in the sky. Then more brilliant lights came on, becoming four in all. They moved in such a way that one could see that it was a large object with four lights on it.

For almost an hour, this object slowly flew back and forth around the settlement and those who were still awake could clearly see it.

Then the object suddenly began to fall and at high speed it plunged into the water. At the same time, it made a very loud and hissing noise, and when submerged in the water, its brilliant lights did not go out.

“We saw four lights in the sky and decided it was an airplane. Therefore, we did not pay attention to it, we just watched its lights go out and then they glow again. Then it flew over the road and disappeared behind the hill, so that it was no longer visible.

We ran to the hill, and when we climbed it, we saw a bright light in the water. We then ran to the street phone and called the Canadian Mountain Police to report a plane crash. “

But then, the mysterious object suddenly floated about a mile from shore. A yellow light shone on it as it rocked on the waves for some time.

Then, the object again plunged deep into the water, but floated again. All 11 eyewitnesses at the port of Shag Harbor saw this object from different points of view and in different places, so that no hallucinations and pareidolia could be mentioned.

It was definitely a material and solid object that, at the same time, did not resemble a land vehicle of those years – an airplane or a helicopter.

The Coast Guard boats appeared shortly after the incident, but by that time the object had already disappeared. Only the odd yellow foam was left of the water.

It was initially agreed that there was a plane crash, but it quickly became clear that no aircraft in the area had disappeared or even passed over the area. Including small private jets.

After that, even the country’s top officials started talking about UFOs. This incident is one of the few cases where, in the documents of a state institution, it is officially stated that the incident occurred with an unidentified flying object.

Several interrogated eyewitnesses also confirmed that the object did not look like an airplane. Some even began to report directly that an alien ship had crashed at the port of Shag Harbor.

When search and rescue teams and military divers did not find debris in local waters within three days, the extraterrestrial version became even more intrusive.

Later, on the day of the UFO incident near Shag Harbor, strange objects were observed in the sky and elsewhere in the same region. Including the pilot of a passenger plane on Air Canada Flight 305, which is said to have seen something unidentified and rectangular flying near his plane.

Over the next few years, the incident at Shag Harbor was carefully investigated by the Royal Police, the Canadian Coast Guard and a group of US investigators, but no one came to a specific conclusion.

According to accidental leaks, it is known that Americans, along with Canadians, have even searched for bodies of dead aliens there. But, it is unknown if they have found anything.

In this article:Canada, Shag Harbor UFO 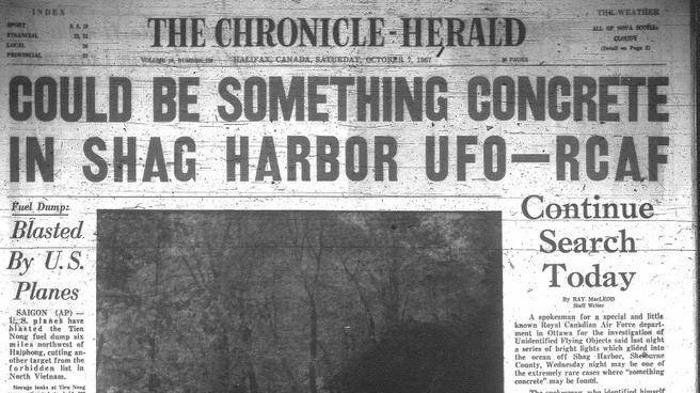 Jacques-Yves Cousteau gained worldwide fame as one of the largest and most successful explorers of the sea and depths. His grandchildren decided to devote themselves...