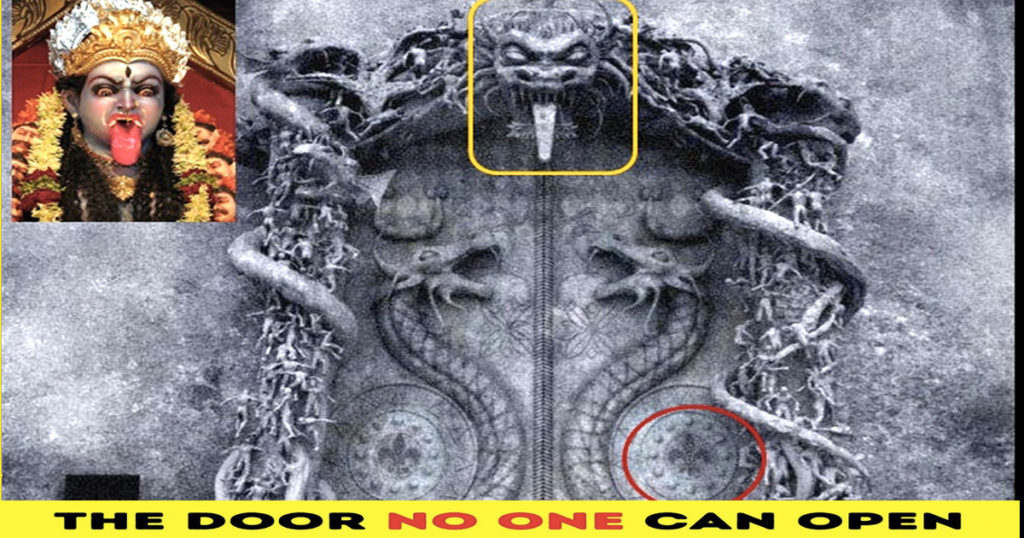 They have discovered under 20 feet of the ground approximately $ 22 Billion worth of highly valuable gold in the form of, diamond jewellery, golden utensils, weapons, golden idols, golden elephants idols and diamond necklaces having 500 kilograms weight and 18 feet length and bags full of golden coins of different nations, including Napoleon and Italian coins in the last one week.

A secret door has been locked by sound waves from a secret chant
with this Sri Anantha Padmanabha Swamy of Thiruvananthapuram, m has emerged the richest God on the earth. And this world is looking at the opulence of this God with the mouths opened in a great shock and surprise.

This chamber is being considered by the Trust members and other learned Astrologers of India, as highly mysterious, sacred and risky and dangerous to unveil it. Because the steel door of the Chamber-B is having two big cobra portraits on it and this door as no nuts, bolts or other latches.

It is considered to be fixed to the secret chamber with the ‘Naga Bandham’ or ‘Naga Pasam’ ‘Mantras’ by the then ‘Sidda Purashas’ who lived during the reign of king Marthandavarma in the 16th CENTURY.

A door of such a secret vault can be opened by a highly erudite ‘Sadhus’ or ‘Mantrikas’ who are familiar with the knowledge of extricating ‘Naga Bandham’ or ‘Naga Pasam’ by chanting a ‘Garuda Mantra’; So except in this way, the door can’t be opened by any means by anyone. At present nowhere in India or in the world such a highly sacred and powerful ‘Siddhapurshas’ or ‘Yogis’ or ‘Mantrikas’ who does know how to execute highly sacred ‘Garuda Mantra’ exist.

If any human attempts are made with man-made technology to open the mysterious Chamber-B other than by chanting highly sacred and powerful ‘Garuda Mantras’ by a highly sacred ‘Sadhus’ or ‘Mantrikas’, catastrophes are likely to occur in and around the Temple premises or throughout India or even throughout the world according to Vedic Astrologers of India, who also revealed their inability to open the door by chanting the secret ‘Garuda Mantra’.

If ‘Garuda Mantra’ is chanted by any powerful ‘Sadhu’ or ‘Yogi’ or ‘Mantrika’, the door proceeds to automatically open and no human effort is needed to open it in any other way.

“holy men do not value gold or riches, money. The treasure of a holy man is truth honesty compassion, respect peace of mind. The holy man is the protector of the virtuous law for Humanity to never wish harm on another human being peace and Harmony throughout the world” – Roger